Perhaps it’s a mid-life crisis at age 65, but I don’t see it as that. Ever since learning how to play Texas Hold’em, I have always enjoyed playing in tournaments in particular, and I know of no place better to do just that than Las Vegas. In particular, I had always wished I could take a vacation there where all I’d do for a week is just play tournament poker. One tournament after another; like a true grinder. I had planned precisely such a vacation a couple years ago, but the onset of the Covid-19 pandemic meant it had to be put on the back burner until the world reopened to travel.

Finally, just recently I was able to book an 8-night poker vacation to Las Vegas by myself (with the loving consent of my wife, who has somehow gotten used to my eccentricities over the years). 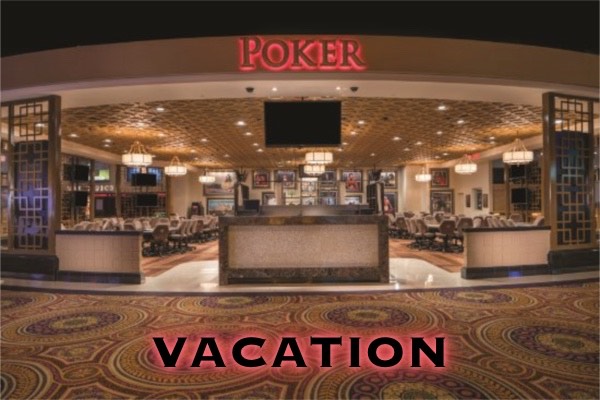 Getting There and Selecting a Poker Room

I live half a world away, so after a 14-hour flight, 3-hour stopover and another 1-hour flight, I finally arrived in Las Vegas after a very lengthy journey. Originally, I had thought I’d jump in to my first tournament on the day I arrived, but that was pure idiocy from my standpoint.

I chose to stay at a hotel within walking distance of Caesars Palace, as that would be my tournament poker hub. Why Caesars Palace? I liked the fact that they ran five tourneys per day with relatively low buy-ins. I did use Uber to venture to a few other spots in the city, but for the most part, I lived and breathed tournament poker at Caesars Palace for a full week.

I did try playing at one other venue, but quite frankly the vibe there just wasn’t as friendly as at Caesars Palace. Everyone at that other place just seemed to be in their own world, focused on their cellphones, or trying to show off their chip tricks to prove just how long they’d been playing poker for. To be sure, the other venue’s tournaments are significantly larger; I played in a 183-person $150 buy-in deep stack tournament there. But there were just too many “minuses” there: no automatic shufflers at the tournament tables, no USB ports to charge your phone, and chairs that weren’t adjustable. In short, just not a pleasant experience.

My elimination hand in that sole tournament I played at the other venue was indicative of play there. I had AJ and bet 3BB. There was one caller. The flop came A-3-5 and I moved all-in. My opponent snap-called with A5, and neither the turn or river improved me. Not a single word was said by anyone at the table. Not “wow, bad beat”, not “bummer”, and not even a “nice seeing you” or “good game” as I packed up to leave the table.

So back to Caesars Palace it was, where I remained for the rest of my tournament poker vacation.

While I enjoyed the tournaments immensely, I should point something out about their structure. The tournament really speeds up after about four hours of play: already at level 7 the ante equals the big blind (1,000/1,000) and by the fourth hour, they reach level 12 where BB/ante is 16,000! So none of the daily tournaments last much longer than five hours. I suppose this makes sense though, allowing the room to run so many daily tournaments in the first place.

The friendliness of the games at Caesars Palace is particularly welcoming. Everyone I played with throughout my week there always introduced themselves. Players apologize for knocking someone out or rivering a hand. I even played in one tournament where an elderly gentleman with severe Parkinson’s was unable to throw in chips or stack them on his own, so players sitting beside him were more than happy to assist. I don’t think that’s something that I’d ever see at that other poker room I played at on the trip. Again, overall just a super friendly vibe.

Another aspect of the tournaments I played in, which probably exists at other poker rooms – is the player deal.  Suppose the tournament pays out the top eight players and there are nine left. Often it gets proposed that everyone left puts in $20 (total $180) so that the person knocked out on the bubble pockets the $180. It’s a nice consolation prize. The poker room staff doesn’t get involved in those negotiations, but a staff member always made sure to state that everyone at the table must agree to the deal.  Once the bubble bursts, after 2-3 more knockouts, someone will usually make an offer for some sort of chop, either equally or via ICM, based on chip stack sizes.

One Player Per Hand, Mama!

At one of the numerous tournaments I played in, I noticed a mother and two of her children playing. She was sort of a Ma Barker type and her son was sort of bear-like. The field of 60 was down to 27 and I ended up in seat 8. By luck of the draw, Ma was in seat 5 and her son was in seat 6. I noticed twice that when he riffed his cards he held them open for about an extra couple of seconds, allowing his mother to peer in and see his hole cards (which I literally saw her do).

I quietly mucked my cards and went to tell the pit boss. She thanked me and after 30 seconds she arrived at the table and quietly whispered to the dealer. Karma’s gonna get you, I suppose. After about one orbit the son busted out, to be followed by his mother a few hands later. In the end, the lady’s daughter, who was playing at a different table, made it to the final 6 along with me. The six of us decided to chop, for a nice payout.

The Poker Trip of a Lifetime

With so much else to do in Las Vegas, the entertainment capital of the world, some might say that I missed out on what the city has to offer. But I came to play tournament poker, so I stuck to my plan. I did absolutely nothing else on my trip aside from play tournament poker.

I hate cash games and enjoy the fact that a $100 buy-in can buy me four hours of fun play time, whereas that same $100 at a cash table might evaporate in the span of five minutes.

Adding to what made the trip more special and enjoyable, I had a group of no fewer than 25 people from back home railing me on WhatsApp. The participants ranged from my home game poker buddies, to longtime friends, to my immediate family. It was fun to run deep and make it into the money (ITM) pretty often. After eight nights, and 14 tournaments, I ended up ITM in five of them (ITM 35.7%) with an overall ROI of 30%.