Everyone knows that consistently notching good results in poker tournaments is hard. It’s one thing to get lucky and win one big event, but staying profitable over thousands of MTTs takes a lot of skill. One key aspect to achieving this kind of results is to fully understand ICM. the Independent Chip Model.

While almost every player out there has heard about ICM and knows at least a little bit about it, the number of those with deep understanding of the concept and all of its different concepts and nuances is relatively small.

That’s why Dara O’Kearney, together with his co-author Barry Carter, felt there was a need for the resource that explains everything there is about ICM.

Endgame Poker Strategy – The ICM Book consists of almost 180 pages of text, charts, and examples, starting with the Independent Chip Model foundations and building on it, adding new concepts and ideas.

While the book isn’t intended for complete poker beginners, as you’re expected to understand some basic notions like poker equity, tournament bubble, deal making, etc., it explains ICM in such a fashion that even if you’d never heard about it before, you’ll be able to fully understand and use it at the tables by the time you’re done reading.

I myself am in the category of those who “know a bit about ICM,” but I’ve never taken the serious approach to studying the concept. Thus, I was really interested to see what this book had to offer, especially since the authors have already published a couple of highly regarded works on tournament poker (specifically satellites and PKOs), and I had pretty big expectations. And, I’m happy to say, I wasn’t disappointed. 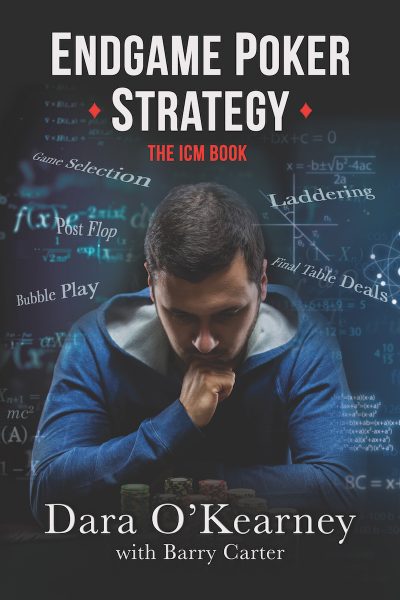 ICM from the Ground Up

The first few chapters of O’Kearney’s Endgame Poker Strategy – The ICM Book explain fundamentals of ICM. If you’ve been in the poker streets for a while, you’ll probably have a solid understanding of these already, but I still suggest not skipping them.

Instead of just explaining the common ideas of why thinking in terms of ChipEV doesn’t work in tournaments, O’Kearney goes several levels deeper, approaching the subject from a number of different angles.

He dispels the myth of how ICM is designed just for “poker nits” and takes the time to explain how varying stack sizes have different values in a tournament, introducing some (mathematically backed) concepts that seem counter-intuitive at first.

One idea that I found particularly interesting is the discussion on the diminishing value of chips and the importance of short-stack play in MTTs. Leaning on this idea, O’Kearney explains how registering late for tournaments is, in most situations, a profitable proposition and the one that many players don’t take enough advantage of.

The great thing is that author doesn’t just present his argument and move on. Instead, there are numerous examples and calculations to back these claims, and it all just makes sense.

Of course, this is just one small part of the entire book. There is a lot of discussion covering the “bubble factor” and how to adjust your ranges in terms of ICM. When talking about the latter, the author doesn’t just present a bunch of charts (although there are plenty of those, don’t worry), but tries to help players develop an understanding of underlying principles so that they could intuitively structure their ranges on the spot.

As anyone who’s ever played more than a couple of tournaments in their life knows, not all tournaments are played down to the winner. Making a deal at the final table is quite common and deal-making skills are important for any serious MTT grinder.

The author explains different types of deals you’ll come across and emphasizes the importance of understanding ICM in these situations. He also touches upon the idea of the skill gap and how to adjust numbers based on that factor.

What I particularly liked about this part is that O’Kearney doesn’t just stick to math and numbers in this section. Being an experienced player himself, he understands that players will often find themselves in uncomfortable situations when playing live tournaments.

He offers some great advice on how to deal with pressure situations and avoid being strong-armed into making a bad deal, but also presents the case for giving up on some equity in certain situations to build a good image that could easily translate into higher equity later down the line.

I’d say that this is where Dara’s experience really comes through as he understands that, as much as poker is the game of numbers, it’s also a people’s game. Sometimes, you have to consider both factors and compromise a bit.

The second part of the book is more “technical,” as authors go into more serious analysis of charts and numbers. First, there is the discussion on the importance of game selection and how it ties in with ICM. Good understanding of ICM concepts will probably be more important for players playing smaller-field tournaments, as they’ll constantly find themselves in important ICM spots.

On the other hand, in massive fields, these spots don’t come nearly as often, but mistakes made can be very costly in terms of money on the line.

In the light of game selection, the book also talks about tournament overlays and how you can accurately factor these in to calculate the value of your stack at any given point in the tournament.

The last chapter actually addresses the postflop play and provides some PIOSolver examples, but O’Kearney admits that this is a very complicated area that probably requires a book of its own. He also puts forth the argument that the higher the impact of the ICM, the less postflop play there is, which is true for most tournaments.

So, How Good Is Endgame Poker Strategy – The ICM Book?

Understanding ICM is essential for any serious tournament player who wants to stay around for a long haul. There is simply no way around it. And, as far as resources go, I dare say this book is the best one out there.

Of course, using various tools available, you could come up with many ideas and solutions on your own, but even so, you’d still lack an understanding of why. Endgame Poker Strategy – The ICM Book looks into every aspect of ICM and explains it in a way that every poker player can understand. After reading through examples and explanations, there will be no doubt in your mind that you understanding ICM will give you a leg up towards being a winning tournament player.

Even better, credit to Carter and O’Kearney for managing to keep the writing interesting and engaging. You’ll find yourself actually wanting to get to the next page and keep on reading, which, given the somewhat dry topic, is really a compliment to the authors’ writing abilities!