Over 100 of the best poker players in the world sit down to play in a tournament featuring a buy-in of more money than most individuals make in an entire year. The tournament also features a full mix of poker disciplines designed to weed out specialists in only one game and crown the best player in poker. What are the chances that the same guy would win this tournament twice in the span of three years? Last night, after five grueling days of play, Michael “The Grinder” Mizrachi somehow defied the odds and became the first ever two-time WSOP Poker Players’ Champion! 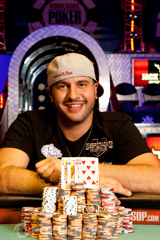 Mizrachi first won the $50,000 Poker Player’s Championship two years ago, when he emerged victorious out of a field of 116. This year’s field was similarly sized, so the victory earned Mizrachi a similar-sized first place payout as well, to the tune of over $1.45 million. The win gives Mizrachi his third career World Series of Poker bracelet, with his other one coming last October in Europe.

In his 2010 victory, Mizrachi outlasted a tough final table that included John Juanda, David Oppenheim, and even his own brother Robert Mizrachi. So too, his 2012 victory came against ultra-tough competition in players like Andy Bloch, Bill Chen, and Bruno Fittousi, all of whom sat at the final table this time around.

Will 2012 Be The Grinder’s Year to Achieve Player of the Year?

With his third bracelet win in three calendar years, the 31-year-old Mizrachi takes over fourth place on poker’s all-time money list and third place on this year’s WSOP Player of the Year list, behind Phil Ivey and John Monnette. Back in 2010 Mizrachi also had a deep run into the November Nine in the Main Event, ultimately finishing in fifth place, with his overall WSOP performance scoring him a runner-up finish to Frank Kassela for Player of the Year.