Michael Mizrachi Grinds Out a Victory at 2011 WSOPE Event #5

A total of 125 hopefuls entered the €10,400 buy-in Split Format No Limit Hold’em Event at the World Series of Poker Europe creating a whopping €1.2 million prize pool. As with all poker tournaments, however, only one player can emerge victorious, and for the second time in 2 years, Michael “the Grinder” Mizrachi came out on top to secure a bracelet, defeating Shawn Buchanan heads up. 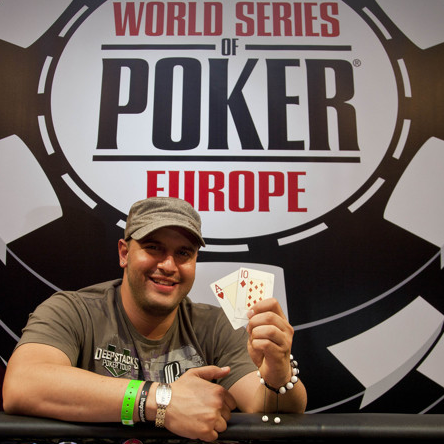 This, the 5th event at this year’s WSOPE, offered a creative new twist to the poker tournament format, as Day 1 started off will full 9-handed tables and Day 2 featured only 6-handed play until just 16 players remained, all of whom would make the money. All play from there on out was heads-up, in bracket format, until one player came out victorious.

Last year, as many readers may recall, Mizrachi had a banner year at the World Series of Poker, first winning the $50,000 Players’ Championship, only to follow it up with a November Nine appearance at the WSOP Main Event. Along with his second career bracelet, Mizrachi also won €336,008. The win catapults Mizrachi to sixth place on the all-time list of money won, with just a shade under $12 million won in total over his career. Some more Mizrachi numbers: At just 30 years of age, the Grinder now has 26 cashes at the WSOP and a whopping 13 6-figure cashes altogether. Maybe it’s time to move him up a bit on my list of the Top 10 Jews in Poker? 🙂