On the most recent episode of the Top Pair Home Game Poker Podcast (#233), my co-host, Bruce Briggs, and I interviewed Robert Woolley, fondly known within the poker world as the Poker Grump.  The interview segment begins at the 14:10-minute mark. You can also read the summarized transcript below. 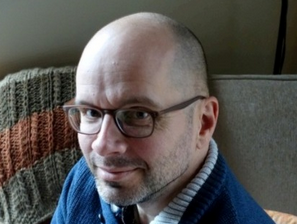 Today’s guest is Robert Woolley. Fans of the Top Pair Home Game Poker Podcast may recognize Robert’s name as we often discuss his excellent articles that he writes for PokerNews. Others may be more familiar with his own personal blog called Poker Grump. Though he produces boatloads of interesting poker articles, we found it difficult to scrounge up much more info than that on him, so that’s what today’s Top Pair Home Game Poker Podcast will be all about, getting to know Robert Woolley a little better 🙂 Without further ado, welcome to the show Robert, it’s great to have you.

So Robert, tell us a bit about yourself. Where do you live and when and how did you first get into poker?

I’m 53 and live in Asheville, North Carolina for the last two years. Before that I spent the last six years living in Las Vegas. I’m kind of in a poker desert out here, as opposed to the real desert of Las Vegas, but it was a good move for me personally.

You only got into poker when you used to live in Las Vegas? Does it go beyond that?

Well, not too much beyond that. I moved to Las Vegas with the idea that I could play poker but also become a poker dealer. I had attended a two-week dealer course and thought it would be easy to get a job. That unfortunately didn’t really work out. Well, I found that I could make a decent living actually playing poker though, so that’s what I ended up doing for a few years.

I started out originally while watching the World Poker Tour – specifically from watching Mike Sexton and Vince Van Patten. Everything was really confusing when I first watched until I could get the hang of it.

My first taste of live poker was in a $40 daily tournament at the Luxor. I lasted about 20 minutes. I was so new to poker that I didn’t understand that the board being paired meant that someone could have a full house! I really had no clue what I was doing.

Did you ever play in any home games when you were younger or growing up?

Never – not even once! I was a complete virgin to poker when Mike Sexton started talking on the Travel Channel back in the day. This was back in 2002-2003. Looking back, I’ve really come far from those humble beginnings. Now when I encounter beginners at the tables, I try to resist the inclination to ridicule them by remembering that not too long ago I myself was a beginner, just like them.

Are you making your living just writing the poker articles? Is that a full-time calling for you?

No, not at all really. Part of my moving out here to North Carolina – a poker desert – was the idea that poker would become a much smaller part of my life. I was prepared for this type of move; that I wouldn’t be able to support myself based on poker. My main source of income is a consulting business that I’ve built up for myself.

I started my Poker Grump blog in late 2006. In addition to all the poker stuff I talk about there, I talk plenty about my life as well.

We’re very familiar with your excellent work for PokerNews. It seems from your editor’s profile there that you first worked for them as a live reporter at the 2009 World Series and then took a 5 year break until you started writing for them again late last year in 2014. How did that all come about? What was the live reporting like? Why the 5- year break?

I never really did live reporting for them. I never went to the Rio and watched hands play out in tournaments or anything. My job with PokerNews back in the summer of 2009 was more summing up tournaments that had concluded. I was on the night shift and I would take the live blogger reports from during the day, find the juiciest bits, and compile them into a story of what had transpired.

This newer position arose completely independently. For a while, they had a dedicated section for newer players. My friend Martin Harris, who was in charge of the section, invited me to write about poker for beginners – more for people who had played in home games or maybe online but who had never really stepped foot in a casino to play live poker. The fact is that there are lots of things that are different from live poker. I wrote 20-30 of those types of articles. The section of the site was then closed down, so I continued writing in the strategy section of the site. I still keep people who are fairly new to poker in mind when writing up my articles. I don’t really do deep-level strategy.

Can you tell us a bit about your home game experience?

Well, I’ve only really been invited to one home game and that was back in Minnesota, before I lived in Las Vegas. Generally speaking, the main goal your first time at a home game ought to be getting invited back (not necessarily winning all you can the first time). I dunno what I did wrong, but I completely failed at that and I got a terse email inviting me NOT to return. No explanation. To this day I don’t know what I did wrong.

Once I moved here to North Carolina, I’m much more involved in home games. One is here in town and another is about an hour away. I’ve also attended some free tavern poker games – they’ve got an interesting set of people playing there. The game out of town I have been to 8 times and the game in town I’ve attended 10 times. It’s certainly a different animal than casino poker.

So how do you decide what types of articles to write? A lot of your topics are incredible relevant to home game poker, which, of course is what we love to talk about here on the Top Pair Home Game Poker Podcast. Do you home game experiences influence what you write about?

One of my recent articles did actually. I ended up writing an article about defensive, or blocking, bets. It was based on something that happened in a home game; but that’s the only one.

One other thing – I know you guys usually talk about how you’re running in your home poker games, so I took a look at my records in the home games I attend. At the lower-stakes 10 cent/20 cent game here in town, I’ve been 11 times and have had 4 losses and 7 wins, but the wins have been a lot bigger than the losses. My net is $360 up; about $33 per game.

The one in town is also less cutthroat. No bad feelings when there’s a bad beat – much easier to laugh it off because the amounts are small. Plus, of course, I don’t have to drive an hour away.

One thing that I have always done right for years now is accounting for every single dollar that I have put into and taken out of playing. It’s the only way to know for sure that you’re not fooling yourself.

You’ve also got your own blog called Poker Grump. Can you tell us about that a bit? When and why did you decide to start writing there? Why did you choose such an interesting name, which also happens to be your handle on Twitter? After having spoken with you thus far, you don’t seem too grumpy 🙂

Well, in late 2006, I had been in Vegas for 4-5 months. I was becoming familiar enough with casino poker to notice all the things that they could do better. Dealers, players, management, etc. I had no outlet for expressing my frustration about that. A friend of mine who was a poker dealer had a blog, so I figured I could do that too.

So I started the blog with the subtitle: “All the things I hate about the game I love”. The first few posts I tried adopting a surly tone, but that couldn’t be sustained. I just had to be myself. It’s not in my nature to be grumpy or angry all the time. But that’s how the grumpy thing started. Once I had the name, I decided to stick with it. Plus, it gives me the excuse that on the occasions that I am grumpy, people can’t say that they weren’t warned.

How do you decide what to write about for your blog?

When I was in Vegas that was easy. There was a never-ending stream of incidents and characters… plus I was paying attention a lot more back then to news going on in the poker world. So there was a constant stream of things to write about. For years I was averaging more than a post per day.

Now there are fewer things that catch my attention. Fewer situations, terms, moves, rules, dilemmas, that are novel to me and that I haven’t written about before. So it’s much more of an occasional thing for me nowadays. If I see something interesting I’ll post about it.

Well Robert – thanks for spending some time with us; we appreciate you coming by!