Over the last few days, I’ve been debating how to best recap the action on High Stakes Poker season 7. Last season’s recaps went into great detail about each hand, and that was the plan for this season as well. The problem with this season though, as mentioned in my last poker blog post about HSP, is that it simply won’t stack up well to seasons past. With Gabe Kaplan and all the Full Tilt Poker players out, the game can only be SO good. 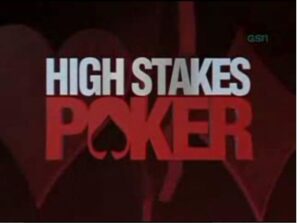 Nonetheless, High Stakes Poker is still a fun show to watch and follow, so I’ll basically be doing “highlight recaps” of stuff that the poker blogger here at Cardplayer Lifestyle enjoyed the most in each episode.

Aside – Throughout the show, I keep pinching myself that there can’t possibly still be poker players in 2011 who play as badly as the gazillionaires. I guess the main attraction of these guys is that they literally wouldn’t bat an eyelash at losing a couple hundred thousand dollars…

In the 2nd notable hand David “Viffer” Peat’s  J-10 of hearts and Bill Klein’s 2 black aces fight for supremacy. It’s literally a 50/50 coinflip on the flop. The gazillionaire only wants to run it once, clearly making Viffer slightly uncomfortable, but luckily for him, Viffer hits a heart on the river to double up.

I like Norm MacDonald’s line: Doyle sucked out on Cancer – runner runner, lol!

In the next hand, Doyle showed us some of his own comedic chops with a great line after Selbst reraised Esfandiari with the same AQ that he’s forced to lay down: “sometimes you’re the pigeon sometimes you’re the statue”. Maybe he should get in the booth next to Norm…

Nice profile on Bill Klein – donating wins AND matching losses to charity. That’s really pretty amazing – he bought in for $500,000 and if he loses it all, he’s gonna be donating a matching amount to charity?! Wow… Indeed hard not to root for him.

The next hand proved relatively standard, but then turned into a gem with Barry Greenstein’s $100,000 river bluff on Bill Klein. Greenstein clearly knows his customers and made a perfect read that Klein hit the queen and couldn’t call for that much more. Viffer, Selbst, and Antonio all seemed to realize what happened.

Doyle then proceeds to show Selbst how to play poker, looking her up with a pair of ducks. Inexplicably though, Doyle later folds QQ to a $20k bet by Phil Ruffin (holding AK) on a blank board. Way too much credit if you ask me, but then again, I barely have $20,000 to my name, so I’ll shut up…