As reported just a couple days ago, Phil Ivey returned to U.S. poker tournament play, and has done so in a big way, but probably not as big as he would’ve liked. Though he tried to build on his recent Aussie Millions success, Ivey ended up being the bubble boy at the LA Poker Classic Main Event, finishing in 55th place at the event he won 4 years ago. In typical Phil Ivey fashion, he left the table without saying a word. 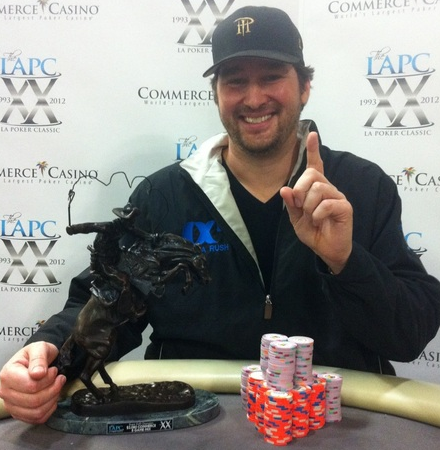 In addition to the nice “side money”, Hellmuth scored $39,000 for his win, and duly “celebrated with his fans” via his Twitter feed, where he posted the victory picture you see on the right. Though not as prestigious as a WSOP bracelet, surely Hellmuth is pleased to finally win an event instead of finish runner up.