Defying Poker Stereotypes One Hand at a Time

Ed. note: This article was submitted to Cardplayer Lifestyle by Power Poker on behalf of Abby Merk, who competed in the World Series of Poker for the first time this year. We wish Abby continued enjoyment and success at the tables.

A seat at a No-Limit Hold ‘em table at the World Series of Poker (WSOP) in Las Vegas was not somewhere I saw myself two years ago. But my journey through the world of poker has offered surprises and opportunities I never would have banked on.

Poker wasn’t really supposed to be in the cards for me. It’s a game for rich old men in smoke-filled casinos, not philosophy students at North Carolina’s Wake Forest University. And, well — elephant in the room time — it’s especially not for young females. Growing up, my exposure to poker was limited to seeing my dad watch it on TV. Put simply, there was no reason for a young girl to learn how to play poker.

It took me a while to move past that bias, but I now realize there is more to poker than amassing chips and hustling your fellow players. The game is a gateway to building confidence and acquiring life skills. Gender should not be a barrier to learning money management or risk assessment — skills that become second nature to a poker player.

I’m a very competitive person and really love playing games, strategy games in particular, so my friends and I signed up for a course from Poker Power, an organization that teaches women to play poker as a way to acquire valuable life skills. After the first lesson, I was intrigued. Pretty soon, I was hooked. By the end of the course, my amazing instructor Sarah Stefan had become a mentor, and I wound up playing games with her entourage of professional players, like Kyna England. While I dove into a myriad of other poker resources, including Solvers, the Poker Power mission meant so much to me that I wanted to continue working with them.

I became a collegiate ambassador for Poker Power to encourage women to sign up and hopefully experience some of the amazing effects the game had on me. Using the networking skills I’d amassed through my lessons, I connected with people at the organization and last summer, I became an official Poker Power instructor.

From learning to teaching to competing

Learning the game as a student is rewarding, but nothing compares to teaching. I’d been able to apply my own passion to poker, but here was a chance to see how applicable it can be to women at every stage of their lives and careers. From high school students with no networking experience to seasoned professionals looking for the killer instinct to secure high-dollar deals, it’s thrilling to see how they develop. Every week, I hear stories of women empowered by what they’ve learned. Through poker, they’re building the confidence to achieve things they haven’t been able to do before. That’s inspiring, and I hope it continues.

That’s what made my trip to the WSOP so humbling and exhilarating. I felt like I was representing everyone who dared to tackle the impossible and defy expectations. To prepare, I enlisted the help of some friends and players I respect to point out any holes in my game. One overarching theme of advice caught me off guard: “you care too much about the money.”

What does that even mean? Of course I care about the chips! But what they were ultimately telling me was to take risks and not allow fear to dictate my decisions. You can look at each play by its end result and the cash value, or you can ask yourself if you would repeat that same move in another game. Analyzing that metric helps me learn more about my approach to things beyond poker, and the advice proved prophetic at the WSOP.

The World Series of Poker

Poker is a game of resilience. You will make mistakes. You will lose. And as tempting as it is to blame the cards, that’s no way to progress as a player. My first WSOP event was the Millionaire Maker, and, spoiler alert, I’m not writing this with seven figures in my bank account. 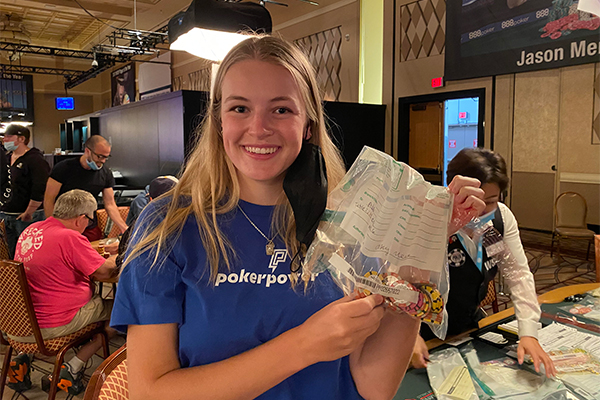 In a field that started with around 6,000 players, I was 10 away from cashing in. I could have easily folded into the money, but I was playing to win. That’s what poker has taught me to do, and, with a pair of queens in my pocket, I felt good about my chances.

But one opponent was much more aggressive than I expected, consistently calling and raising, forcing me to wonder exactly what sort of hand he must’ve been holding. I should have put him on the ropes more to make the hard decisions, but I allowed myself to react to his play instead. I was so uncertain; I even admitted which cards I was holding to gauge his response, which only fueled my confusion.

I was the 90% favorite to win that hand, but he got lucky on the river and ended up with a backdoor flush. I was pretty embarrassed. I only tilt when I play the hand incorrectly, and I feel like I did in this instance. Poker — and life — are not meant to be measured solely by results. I gave myself permission to be upset for a few minutes and then had to move on and prep myself for the next event.

As a result, I was in the zone for the four-day Ladies No-Limit Hold ’em Championship. About 700 women signed up, and it can be eye-opening not having men at the table. There’s normally two types of guys you encounter in poker as a young woman: those who underestimate you and decide that you’re incapable of bluffing, and the ones who assume you’re overeager and bluff exclusively.

First WSOP and first cash in the ladies event championships. Thanks so much to the people that make the magic happen. I had an amazing time. #femalepokerplayer #poker #pokerplayer #wsop #WSOP #ladiesevent #pokerpower #flipthetable pic.twitter.com/9BdDm8My9M

Once you suss out who you’re dealing with, you can take advantage of their blind spots, but an all-female table is an entirely different environment. My style of play is usually more reserved and secretive, but with the women, we were friendly almost to a fault. I was genuinely cheering on my opponents, bonding with them, and celebrating their victories. I gave the woman who took me out a hug afterwards! I would never do that with men. Kudos to the WSOP for providing a place where we support each other’s poker journey.

That’s such a key factor I think in why women might shy away from poker. Just about every female poker player has a distressing story of being mistreated at the table. Even now, poker is marketed to and designed for the old-school demographic. But as women step up and start playing, men need to be allies. If you see us facing sexism, please speak up. It makes a big impact and can really start turning the game around and making it more accessible for everyone.

How poker transformed my job prospects

Poker has opened so many doors for me. My majors are philosophy and math, and I was uncertain where I wanted my career to go. I found the finance world interesting but never had exposure to it. Though nontraditional, poker became an ideal way to practice those skills. I took part in an internship training women to become traders over the summer, and the parallels to poker were remarkable. Now armed with courage and determination, I ultimately applied for a role on the PEAK6 Investments trading team, and I landed it! The power of poker gave me the confidence to go for it, and it helped me land a job in a traditionally male-dominated industry.

Of course, I’ll continue honing my poker skills. There are many games and charity events that can serve as great practice for the higher-stakes tournaments down the line. I definitely hope to make a return to the WSOP.

Sitting in class right now daydreaming about the series…. Take me back to WSOP!!! #wsop #school #poker

To say that poker has been life-changing would be an understatement. In just two years, I’ve met amazing people, learned vital skills, discovered a new career, and competed in a million-dollar tournament. There’s no telling what will happen when you get in the game and take your seat at the table.