Readers of Daniel Negreanu’s poker blog know that he always sets himself goals for the year. His first goal for 2011 was to win $1 million. Incredibly, just a couple weeks into the New Year, Negreanu can already cross that off his list! While he didn’t win the $100,000 Super High Roller event at the PokerStars Caribbean Adventure, second place was good enough to win Negreanu $1 million and catapult him into the all-time lead for money won in poker tournaments (around $14 million), ahead of Full Tilt pro Phil Ivey. 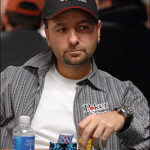 For those keeping score, the event was won by Eugene Katchalov, who took home a cool $1.5 million for outlasting the elite field of 38 poker pros. Just 5 players cashed in the event, including Nick Shulman, who finished 4th, while Humberto “the Shark” Brenes took home $200,000 for his 5th place finish.