Casino Games Can Also Teach You Some Poker Lessons

Many people who play poker would agree that in order to become a better player you ought to read books, watch training videos, and gain more experience playing at the tables. Take a look at the live tournament results of many top poker players on the Hendon Mob and you’ll see many who followed that tried and true method of improving. That said, one of the most worthwhile things you can do as an aspiring player is to think outside of the box and try to learn from new sources. 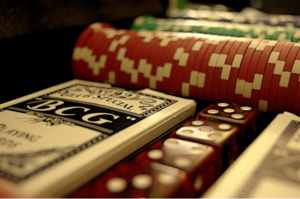 In other words, if you take the time to deviate from “traditional” teachings, you could potentially develop some “unconventional” skills that may give you the edge over some opponents you might face at the felt. Take Viktor Blom as an example. The young Swedish pro managed to shock the world in 2009 when he “appeared from out of nowhere” to beat the top online pros and bank around $6 million in a short space of time. Why did he win so much? Well, part of the reason is because he brought a style of poker that few had seen before. Unique moves made him hard to read and that allowed him to quickly gain the upper hand over his opponents.

With the idea of “thinking outside the box” in mind, it’s worth noting that some casino games can actually provide a rich source of enquiry for the inquisitive poker mind. Although many would assume that casino games can’t offer much in the way of skills or experience to poker players, the opposite is actually true.

Make the Right Choice for Your Bankroll

Even though games such as blackjack, roulette and slots have a greater emphasis on luck, there are still plenty of skills you can take from these games to help boost your poker credentials. For example, if we take the concept of bankroll management, knowing what to bet and when is crucial in both blackjack and poker.

When Doug Polk started his second $10,000 bankroll challenge in 2016, he noted that it was better to play SNGs with a small bankroll because the rake in cash games was too high at the lower stakes. Essentially, what Polk was saying is that you need to choose your investments carefully when you’re working with a small bankroll.

This is very similar to the idea of splitting and doubling in a game of blackjack. In any game where luck outweighs the skill factor, you want to reduce your variance as much as possible; especially when you have a small bankroll. When this is the case, splitting and doubling should be seldom used even if you know it’s a potentially profitable move. Indeed, because you have to match your stake to split, it can end up being a costly move if you’re wrong.

This is something Polk was highlighting during his challenge. Even though he would have had a positive expectation in low-stakes cash games (because he’s a more skilled player), the dynamics didn’t create a favorable situation, so it was better for him to choose a different option.

Make the Right Choice When You Bet

Building upon the above idea by taking a specific example, a casino game like Betway Casino‘s Live Ultimate Texas Hold’em can help teach us how to time our bets. At the start of the game, let’s say you make a minimum bet. At this point, the dealer will give you two cards face up and their own face down. You then have the option to place a second bet. Next, you’ll see the flop, after which you’ll have another option to bet. Finally, the turn and the river are dealt and you’ll have one more chance to bet before the dealer’s cards are revealed.

According to the rules of the game, the dealer qualifies with a pair or better; after that, the best five-card poker hand is declared the winner. Now, to make the game more interesting, the earlier you place your second bet, the more you can win. From this, you can see that an understanding of hand values is crucial. Judging both the current value of your hand as well as its potential to make something stronger will give you an idea of the best time to make a bet. This concept is just as critical in traditional poker. Knowing when to pull the trigger is the only way to extract maximum value from an opponent.

Don’t Be Afraid to Think Outside of the Box

Even though you might not be a fan of casino games, that doesn’t mean you can’t learn a thing or two away from the felt. Many casino games force you to think about probabilities, betting patterns, and the general dynamics of gambling. This process alone is enough to help many players hone their skills at the poker tables. Beyond this, playing casino games gives you the opportunity to get a better handle on your emotions, which is great for controlling tilt at the poker table.

When you piece all this together, it becomes clear that casino games give you the ability to become a better poker player if you put your mind to it. Whether you’re Phil Ivey or Joe Average, taking the time to think outside the box is never a bad thing.