D&B Poker does it again! I almost fell off my chair when I found out I was going to have the opportunity to review Greg Raymer’s new book Fossilman’s Winning Tournament Strategies. I seriously had to pinch myself to be sure I wasn’t dreaming! I mean, Fossilman; THE Fossilman… the living legend! I spent 15 minutes staring at Greg Raymer on the cover to see if I could get a read off him! I couldn’t spot a tell and decided it would be best to muck my cards. 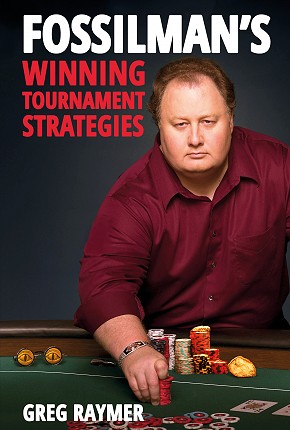 Speaking of tells, there is a chapter dedicated to the subject. I have read several books, written by experts who specialize in poker tells. However, the insights that the 2004 World Series of Poker Main Event champion Greg Raymer has to offer (based on three decades’ worth of experience) are even more ‘telling’ (pun intended). The wonderful thing is that Raymer is not only able to clearly explain what certain tells may mean, but he also illustrates how to use that information to adjust your strategy to best exploit the situation. After all, knowing what tells mean doesn’t do any good unless we know what to do with the information.

If you are a serious tournament player or are considering being a serious tournament player, this book is for you. The ICM chapter alone makes this book a must-have in your collection of D&B Poker study resources. We all mostly know how to apply ICM strategy, but we don’t necessarily understand the why. Once you understand the math behind ICM strategy, you can go from mostly knowing how to apply it to wielding it like a ninja with nunchuck skills.

It turns out that, unlike ninjas, tournament players shouldn’t put such a premium on survival. The good news is that it doesn’t mean we should put away our nunchucks. No, no. Rather, it means we shouldn’t stop attacking! Basically, at the start of a tournament when ICM strategy has not kicked in yet, you should not make decisions based on “finding a better spot”. You should make plays based off whether it is +EV or -EV, just like a cash game. Raymer says that he sees professional poker players getting this wrong all the time. So that chapter is for everybody, no matter what your current skill level.

I love that Fossilman’s Winning Tournament Strategies covers several tournament structures. It covers satellites, reentry and rebuys, bounty, short-handed, turbos, shootouts, heads-up, limit, and pot limit. I seriously feel like I could go into any one of these tournament structures now and know exactly how to adjust, whereas before I would have had no idea. This skill is huge and almost by definition makes you a bigger potential threat in any tournament you decide to play! Your local casino offers tournaments all week long. How many times do you pass on the opportunities to play because the schedule of events doesn’t include one with a structure you’re familiar with? That’s money you’re leaving on the table! After reading Winning Tournament Strategies you can go and get it. Plainly speaking, the average field that enters these uncommon tournaments don’t understand how to adjust correctly. They often don’t adjust at all; you can exploit that.

Finished the last recording session last night for the audio version of FossilMan’s Winning Tournament Strategies. It should be available from https://t.co/dJYtlqj8pN within a couple of weeks. Hope you enjoy! pic.twitter.com/971racPOhM

Every single chapter is gold. This book exceeded my expectations (which were, admittedly, really high). Have you ever looked up Raymer’s Hendon Mob stats? When someone of his caliber graces us with a poker book, we would be wise to check it out. I am positive that Fossilman’s Winning Tournament Strategies is going to be yet another book from D&B Poker that is going to get read and reread again just like so many of their other poker books in my stash. I can’t say this enough, if you are a serious tournament player or are considering trying to become a serious tournament player, you must get this book. Not having this book is like a ninja without nunchucks! Get the book, get the skills, and kick some butt!