The Best Place to Play Poker in Budapest

Back in February, my wife and I took a pleasure trip to Budapest, Hungary. As with all trips I take, I always try to see if there’s a poker room at which I can play. While poker was most certainly not going to be the focus of this trip, I knew I’d be able to squeeze a couple hours of cash games in… if only I could find an actual poker room! I spent quite a while scouring the internet for any sort of lead, practically to no avail. There seemed to be quite a few small casinos as well as plenty of ways to wager online, but no poker rooms. This isn’t surprising in a digital era, with everybody always staring at their Smartphones. After online bookmakers developed gaming software for cell phones, gambling through mobile apps on the go became an instant hit, and many people started playing at home instead of in land-based facilities. But had this trend affected Budapest as well? Surely the Hungarian capital, a city with a population of 1.75 million people, had to have at least ONE card room, right? After much searching, I found just one place that might have fit the bill.

Anyone ever play poker in Budapest before at a local room? Found this place still active, but that’s it. https://t.co/oty1aqXBSB Help?

It’s always good to “know a guy who knows a guy.” My friend, Poker Central Senior Editor Remko Rinkema, was able to hook me up with his buddy Zoltan, a Budapest local, who pointed me in the right direction. He confirmed that indeed, the Duna Poker room was where I’d find some enjoyable poker action and that it was a fine, new place just having opened at the start of 2017.

Getting to Duna Poker: An Adventure!

I was staying at the Marriott, approximately 20-25 minutes away from Duna Poker via public transportation. I set off to see the room on a Saturday night. 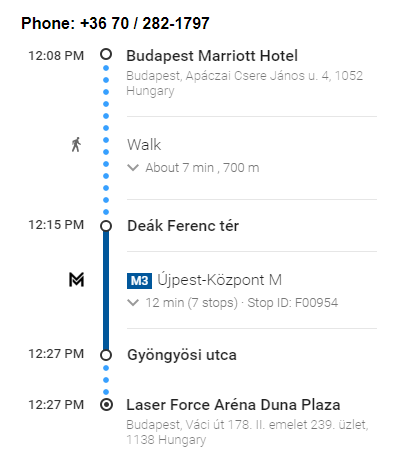 While maneuvering Budapest’s subway system was straightforward enough, I emerged above ground to… a large shopping center?! The streets were dark and pretty deserted, and I didn’t see any signs leading toward a poker room. I could’ve headed back to the hotel; after all, wandering around the streets of Budapest alone late on a Saturday night didn’t sound too appealing. I did, however, have the poker room’s phone number on me, so I rolled the dice and called, hoping they’d speak enough English to let me know if I was in the right place.

Peter, the room’s manager, was kind enough to point me in the right direction. “Walk towards the gas station; you’ll see a Pizza Hut sign… I’ll come out and meet you.” I’ll admit, things started to sound just a tad worrisome hearing that, but I figured it would at the very least make for an interesting adventure to write about some day.

A couple minutes later, I saw a man in a fine suit walking towards me calling my name. Peter turned out to be SUPER nice. He escorted me up a couple staircases towards a side entrance of the mall.

I imagine that if I was trying to get to Duna Poker during daylight hours, it might’ve been easier. Also, knowing Hungarian would likely have helped a lot! I’m guessing that had I just been given directions to the Duna Plaza mall and been told to walk around within, where I’d find the poker room, it would’ve been a lot easier to find. 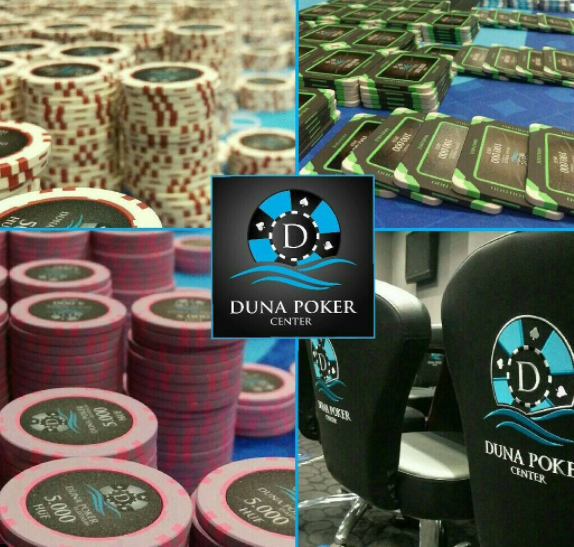 To say that Duna Poker is primarily a “locals room” would be an understatement. I’m reasonably certain that every single person playing in the room that night was Hungarian (not that there’s anything wrong with that, of course). I’m taking an educated guess that the primary “obstacle” for foreigners to find and play at Duna Poker is the language barrier. Hungarian is unique among world languages in that it doesn’t really have any related languages (except for Finnish… sort of); you either know Hungarian or you won’t understand even a word of it.

Looking around, it was indeed a very classy, well-appointed room, but it was pretty clear that they rarely – if ever – got any American players in the games they spread. 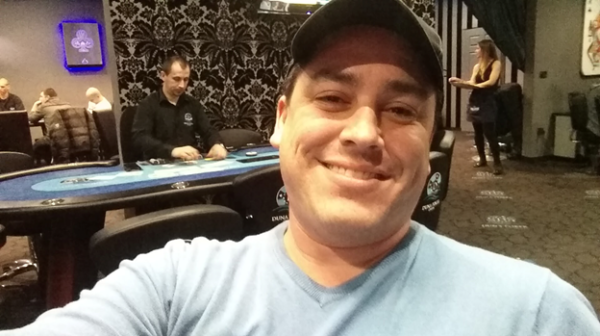 Also, of note, Hungarians play for forint, the local currency. Not having too much of that on me, I asked if they had a foreign exchange facility, as is common in most international casinos. Peter stepped outside with me and was kind enough to exchange a couple hundred dollars for Hungarian cash. He also assured me that I could purchase back my dollars at exactly the same rate when cashing out (which, at the time, was approximately 280 per dollar). Like I said, Peter rocked!

Important: Unless you’re Hungarian, you best be sure to have your passport handy. As nice as the staff is, they won’t let you play without it. Thankfully, I had remembered to bring mine.

Time to Play Some Poker

Before buying in, I walked around a bit. Asking if there were any additional tables beyond the nine I saw in front of me, I was told that there were actually two other poker rooms across the hall called the Silver and Gold rooms, respectively, which were used for tournaments. I was in the Platinum room, where the cash games were played. 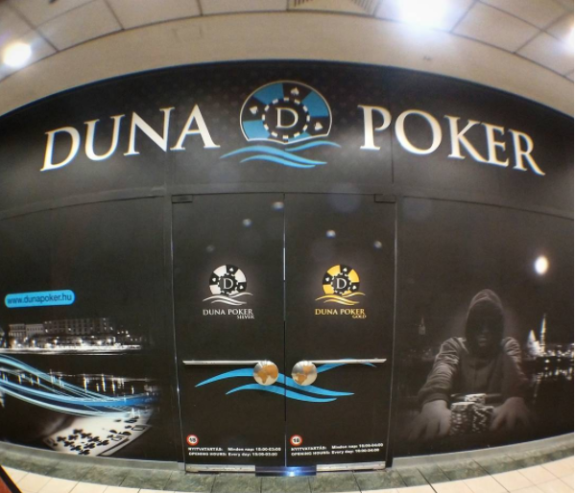 With five games running, I settled in to an open seat in a 50/100 NL Hold’em game, the equivalent of $.20/.40 or thereabouts. The highest stakes games they had going at the time were for double that; the 100/200 tables were full.

The game itself wasn’t too tough. While, as mentioned, all the other players were locals, the dealer was kind enough to announce all the action in English for my benefit. All the cash game tables were outfitted with automatic shufflers to help keep the action moving. Occasionally, a waitress appeared offering drinks, which were complimentary.

While all of the above give Duna Poker high marks, what I was most impressed with was that it was a non-smoking poker room. After my experiences playing poker in Prague, I had girded my loins for another night “in the hazy blue cloud.” You can imagine my joy at the fact that not only was it a non-smoking poker room, but it actually smelled quite pleasant to boot!

Peter told me that they occasionally play host to a 500/500 forint Pot Limit Omaha game, about once a week, but that the cash game area was basically a cathedral to Hold’em. 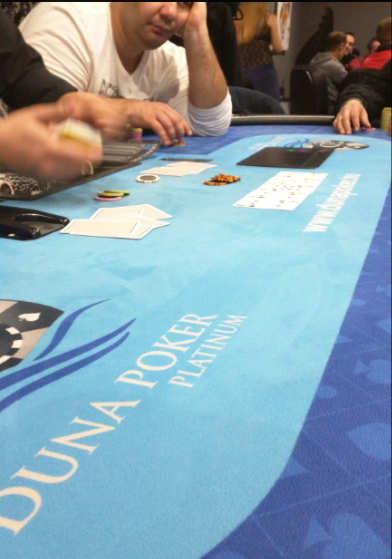 Duna Poker: A Great Place to Play Poker in Budapest

In the cash games area, there’s a high hand jackpot awarded a few times a day as well as a Royal Flush jackpot on offer. The room advertises 24/7 cash game action, but realistically speaking the games are pretty dead from the early morning hours until around 2pm or so, when things start picking up.

The Duna Poker website seems quite informative, in general, but the one drawback is that the information is solely available in Hungarian. From what I can tell from Google Translate, there seem to be daily tournaments as well as occasional special events.

I ended up a winner in my 3.5-hour cash game session for about 6,000 forint (a little over $20), most of which I ended up using to pay for a cab back to my hotel. I unfortunately hadn’t realized that the city’s subway system shuts down at around midnight. Oh well.

All in all, I must again say how impressed I was with the Duna Poker room. I had barely expected there to be any poker at all in Budapest. As you can see, I ended up not just finding a run-of-the-mill poker room but a true gem.

So, when planning your next Budapest vacation, I highly recommend carving out a few hours to head to the Duna Plaza mall for a little poker. Be sure to tell Peter I say hi! 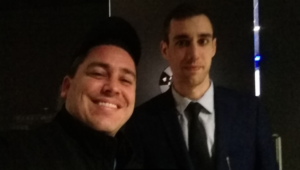 Thanks for this post! I’m a half dutch, half hungarian poker player but I’ve never played in budapest. This blog helped me out a lot, since reading hungarian is still quite a task for me. For sure checking this place out soon!

Thanks so much for the kind words! I’m so happy you found this review helpful and that you “now” have a great place to play locally 🙂 Send my regard to Peter when you see him (he knows this poker site now, haha) and win some pots for me. Enjoy.

Writing this sitting in the Platinum room that Robbie writes about, correcting few facts (on June 2018):

– only a couple of tables have automatic shufflers, most of them are handled manually
– drinks or anything else is not complimentary.

Thank you so much, Marko, for the updates! Much appreciated.