Behind the Scenes of Barry Greenstein’s Conversation with Phil Ivey

Poker fans around the world got a pleasant surprise in early October when, out of the blue, a new video debuted on the Poker King YouTube channel entitled “A Conversation with Phil Ivey”. The eight-and-a-half-minute long video featured longtime friends and fellow Poker Hall of Famers Barry Greenstein and Phil Ivey discussing all manner of topics including mental health, how poker play in Asia differs from poker in the United States, and how Phil stays in shape.

That such a conversation would take place between friends is nothing unusual. A number of factors, however, made the video noteworthy, namely the candidness with which Ivey spoke about a variety of topics including his own lifestyle, and the very fact that Phil appeared on camera in such a casual setting. The footage represented the longest media exposure away from the tables he’s had since the Phil Ivey MasterClass debuted in the late spring of 2019. Interviews with Phil Ivey are rare enough, but this type of open conversation being recorded on camera between two legends was essentially unprecedented.. 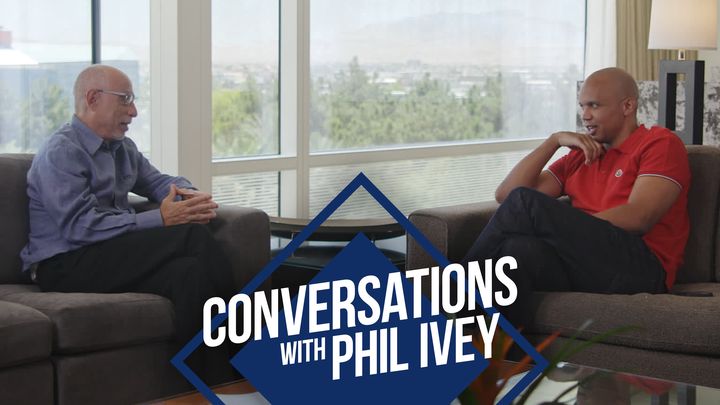 The pinned comment from Poker King notified the world that additional installments of the conversation would be posted, whetting poker fans’ appetites for more. While PokerGO subscribers were the first to be treated to the full four-part series, the second, third, and fourth installments were slow-released for free on YouTube over the past several weeks.

All in all, just over half an hour in combined, brilliantly edited and showcased footage was released, cut down from about 90 minutes of raw conversation between Ivey and Greenstein. Filmed back on July 10 at the Aria Resort in Las Vegas, the miniseries was clearly a long time in the making, and the results are simply fantastic.

Curious as to how the concept was brainstormed and eventually materialized, I reached out to Daniel Maor, the Senior Director of Operations for Poker King LIVE, for some insight. With the assistance of Poker King’s video producer/director Thomas Keeling, Dan was kind enough to respond to a battery of questions, giving us all a better understanding of how the entire project came together as well as the broader context of what Poker King is looking to achieve.

What’s the connection to Poker King? How was it decided that the videos would premiere on your YouTube channel?

Poker King is the leading mobile poker app in Asia, and Phil Ivey is one of Poker King’s ambassadors. The videos actually first premiered on the Poker King app, then debuted on YouTube shortly thereafter. YouTube is the best platform for delivering poker content to the masses, with its large built-in audience of poker fans.

Phil Ivey interviews are rare. It’s even rarer to be privy to a conversation he has with a fellow pro. Who came up with the idea to film Barry and Phil having the conversation?

The idea came Thomas. It started from the observation that podcasts have an informal and conversational  tone, which we wanted to translate to video.

Did Barry come up with the topics and questions on his own or was it sort of a collaborative effort to provide Barry with a direction in which to take the conversation?

Thomas forwarded some questions as a loose guideline, but it was expected that Barry would have his own follow-ups or steer the discussion elsewhere. You don’t chat with your friends in a rigid Q&A format, and likewise we wanted to let these conversations play out naturally.

Why was it decided to break the interview up into multiple segments rather than release it all at once?

This was mainly a strategic decision. There are certain metrics on YouTube we want to optimize for to perform well in the recommendation algorithm. It also makes sense to cast a wide net with a new and growing channel. It would have been a shame to post the full-length interview back when nobody was aware of the channel, when very few people would end up seeing it.

As of publication time, three segments have been released on your YouTube channel. When will the last installment become publicly available?

The fourth and final segment will be released this week and will feature Phil and Barry discussing how their friendship developed over the years. Phil will also talk more about his personal life outside of poker. We’ve also filmed another interview in similar style featuring Phil Ivey and Nick Schulman, which will be released later this year.

It’s a tremendous treat for poker fans to watch the footage. It’s unique in so many ways. In particular, I can’t remember ever seeing Phil being so open and candid about his career. What motivated Phil to agree to have this conversation filmed?

For years, Phil’s friends have often said that he’s misunderstood, and that his persona away from the table is much more cordial than the “stone-faced poker crusher” we see at the felt. He’s a fun guy to hang out with. Because of the casual setting of these interviews, you’re seeing that side of him for the first time.

Beyond giving poker fans around the world the gift of such great videos to watch and enjoy, does Poker King have some sort of other goal here?

The current goal is simply to grow the brand and continue making high quality content. We want to be a household name, where poker fans can be excited to expect engaging content featuring their favorite players.

You also recently released the first installment of videos featuring Nick Schulman interviewing Tom Dwan. What other sorts of content can poker fans expect from the Poker King YouTube channel in the near future?

We recently recorded a lot of footage during High Stakes Poker week in Las Vegas. That was the setting for the Tom Dwan AMA. There are several more episodes of that coming, as well as interviews with Phil Ivey and hand breakdowns from Nick Petrangelo, John Andress, Jean Robert Bellande, and Doug Polk. We’ll also be rolling out some educational content.