Ask the Poker Experts: Help! I’m Too Scared to Move Up in Stakes!

Our ongoing Ask the Poker Experts series is back once again this month with a question quite common among recreational players. It’s good to have a comfort zone in life and in poker, but branching out of it from time to time also has plenty of merit. The trick is often getting the timing right. If you’re a winning poker player at a certain stake level, how do you know when the right time is to move up to the next stake level? The issue isn’t just a mathematical one; i.e., amassing a bankroll of a certain size, but also a psychological one with facets relating to timing and proper game selection.

QUESTION: I’ve been playing live poker recreationally for about 7 years now, and have always played for low stakes, namely $1/2 no-limit hold’em. For the first three years, I was a losing player overall. After reading a couple books I managed to improve my skills to the point where I was a break-even player for the next two years. Over the last two years, I’ve finally become a winning player (and it feels great!). Slowly, but surely, my bankroll is growing.

I’m wondering what the right time is to start playing $2/5 no-limit. On the one hand, I know that it’s the next logical stage for me as a player, but on the other hand I feel like I’ve “worked” really hard to build up a healthy bankroll and I’m worried I could lose a lot of it too quickly, which would hurt. Plus, everyone at those tables always seems to have heaps of chips on the table and a big wad of cash in their pockets. Got any advice? 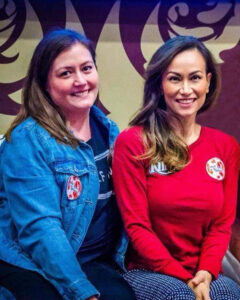 When you try the $2/5 game, be mindful that the strategy of higher level games is quite different. Continue working on your skills and be sure to keep studying, and don’t be afraid to go back to $1/2 to keep building your bankroll. With the insane variance in poker you will need to play in multiple $2/5 sessions to determine if it can be profitable for your style of play and level of risk aversion.

Having a 10X buy-in is recommended, so be sure to build your bankroll to this level before advancing into a higher buy-in game. In addition, when you advance into higher buy-in games, remember that the amount of the rake increases in tandem. Keep this in mind and don’t forget to factor additional rake into your bankroll calculations.

Maureen Bloechlinger and Lena Evans are the co-founders of Poker League of Nations, the world’s largest women’s poker organization. Lena is a two-time WSOP Circuit ring winner, CEO of Helix Poker tour, and Editor-at-Large for Ante Up Magazine.  Maureen is currently GPI’s #1 ranked female player in Switzerland, and top 10 overall on GPI for Switzerland. Maureen and Lena may be reached at [email protected]gmail.com. 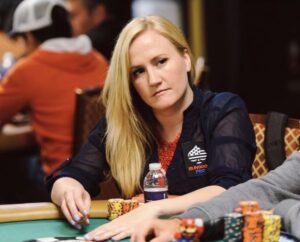 If you’re nervous about moving up in stakes, I would suggest playing your first $2/5 sessions on weekdays, early afternoon when the game tends to be more calm and play a little smaller. The Friday and Saturday night games will eventually be your best bet for making a good hourly rate, but it may be intimidating to start out there if you aren’t comfortable gambling in $2K pots yet.

You might also want to buy in short before you know anything about the other regs in order to get a feel for how everyone plays before being faced with difficult 200bb decisions. Make sure to set a stop loss of a certain number of buy ins so that you don’t blow your whole roll that you worked so hard for. If you lose 5 buy ins during your first week at $2/5, there’s no shame in moving back down to $1/2 until you recover before attempting to move up again.
There’s also no shame in moving up and down depending on how soft the games look. Once you move up, don’t be too prideful to step back down once in a while. Your goal should be to make the most money per hour that you can, and sometimes a smaller game with an easier lineup is optimal.
Jamie Kerstetter is a former lawyer from New Jersey who left the legal world for Vegas and the fucking Mirage. When she’s not busy check-raising tourists, she commentates for WSOP, WPT and PokerGO and hosts the PokerNews LFG Podcast with Chad Holloway. 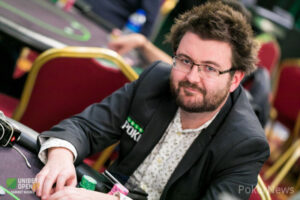 The first thing I would say is that you are absolutely right. A $2/5 game will play significantly deeper than a $1/2 game – probably twice as deep on average – and very few players will short-stack it for the minimum. There will also be significantly fewer soft spots at the table – maybe three weak players as compared to 5 or 6 in the $1/2 game.

You mentioned feeling hurt if you lost a lot of money quickly. That’s very understandable. Poker players on an upward trajectory will always be pushing their tolerances for bigger swings. Therefore, another piece of advice I would offer is be willing to play $2/5 but also OK with dropping back down after maybe 3-4 losing sessions. It’s not admitting defeat. It’s just protecting yourself from a negative spiral, and much of the game is mental. Playing a few sessions versus weaker opponents in the $1/2 game wouldn’t be any harm confidence-wise. Then move back up after three winning sessions in a row.

David Lappin is a poker player of 12 years living with his family in Malta. He is also a writer, commentator, and the producer/host of the popular Unibet Poker sponsored poker podcast ‘The Chip Race’ alongside fellow Irish pro and Unibet ambassador Dara O’Kearney.