Michael Jordan, Allen Iverson, and Charles Barkley – three names synonymous with the NBA, but who also took a liking to hitting the casino and getting their gamble on. These days any celebrities whom don’t want to be caught by the paparazzi hitting the casino can always play online, at places such as the Betfair Casino. Alternatively, if they insist on playing in a live setting, they can just have areas of the poker room closed off to ensure their privacy…

When Michael Jordan shows up to the poker game. pic.twitter.com/H7OVDLXfdO

It’s not uncommon that NBA players try to maintain a high profile after hanging up their sneakers. With the charisma that some of the players offer they certainly have the ability to maintain their profiles even after they’ve retired. Recently the NBA entered into a new partnership that could potentially lead to more retired as well as possibly even active players starting to make their way to poker events and festivals the world over. For instance, former NBA champions like John Salley and Paul Pierce have shown up to play at the WSOP quite often and maintain a genuine love for the game of poker. I for one would love to see more NBA players taking a seat at the felt, and I imagine many other poker fans feel the same way.

With that in mind, I decided to make a list of seven current NBA players who I’d love to see hit the poker tables in the near future. Without further ado, and in no particular order… 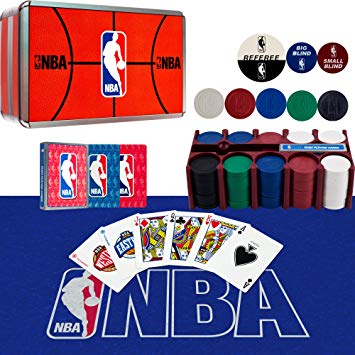 Arguably the greatest shooter in NBA history, Stephen Curry has been with the Golden State Warriors since he was drafted in 2009. The 6’3” point guard out of Davidson college has gone on to win the NBA Finals three times (2015, 2017, 2018).

Curry has the ‘it’ factor on the basketball court and I think he’d make for an excellent player at the poker table too. He’s a complete athlete, looks great on camera, and has a particular type of magnetism about him.

The number one overall pick all the way back in 2003, LeBron James has produced a Hall of Fame career with the Cleveland Cavaliers, Miami Heat, and currently with the LA Lakers. Having just turned 34, he continues to be one of if not the top player in the league, with no signs of slowing down.

Currently without a team but back training with the Miami Heat, 34-year-old Chris Bosh may be looking to keep himself occupied when his days as a professional basketball player come to a close.

An intelligent player on the court and off of it, Bosh promotes sports and education to youths in Dallas and Toronto and has also set up the Chris Bosh Foundation, and regularly speaks to kids about the benefits of reading. Obviously that’s referring to book reading, but it kind of makes me wonder if he also appreciated the importance of making good reads at the felt. Should he ever find himself at a poker table, a Chris Bosh sighting would be most welcomed by the poker community.

The number one overall draft pick for the Los Angeles Clippers in 2009 and a mainstay of “Lob City” for years, Blake Griffin made a move to the Detroit Pistons last off-season. The forward has been named to the NBA All-Star team on five occasions during his career to date, and he’s still obviously one of the league’s big attractions.

Having previously single-handedly re-energized the Clippers when he entered the league, Griffin is currently doing that over in Detroit, too. There’s no doubt that a personality like his would inject plenty of buzz at a poker table. Here’s hoping he decides to someday give poker a shot #forthefans.

Provided he stays healthy and remains with the Portland Trailblazers for several years to come, then there’s no doubt that point guard Damian Lillard will go on to become the franchise’s all-time leading point scorer.

His focus is clearly 100% on basketball at this point in his career, but applying that level of focus and competitiveness to playing poker could potentially make him a genuine threat at the tables should he ever decide to take the game up as a serious hobby. Beloved well beyond Portland, you can be sure that plenty of additional fans would tune into televised poker events, as well as form a crowd of onlookers in person if Damian Lillard were to take a seat at the table.

The second overall pick in the 2010 draft by the Philadelphia 76ers, Evan Turner has turned out to be quite a player. The guard has bounced around the league since leaving Philadelphia but appears to have found a home with the Portland Trail Blazers.

It’s Turner’s great leadership skills, charisma, and his camaraderie that make me think he’d be quite entertaining mugging for the cameras. He already fills up many highlight reels and entertaining ESPN clips, so I can’t help but imagine what it would be like to witness him pulling off successful bluffs or making great calls that would litter YouTube for years to come.

Still going strong at 40, German power forward Dirk Nowitzki has been in the NBA since joining the Dallas Mavericks way back in 1998.

The MVP of the 2011 finals, which saw the Mavericks crowned the NBA champions, Nowitzki has a great attitude on the court and an easy smile that has made him a perennial fan favorite. Skills, charisma, and dogged determination to win would make him a force at the felt, and quite simply a pleasure to watch square off against poker opponents. Plus, he’s got plenty of fellow German compatriot poker whiz kids who could help teach him a trick or two that would make him just as deadly a card player as he’s been on the NBA hardcourts.