Was 2018 the year of the poker fan? Those of us who love the game consider ourselves lucky every year, but plenty of things happened in the past 12 months that made 2018 a fantastic year in poker.

If you were going to use the hashtag #goodforpoker on social media, you could certainly apply it to this list of 10 things that were good for the game in 2018. 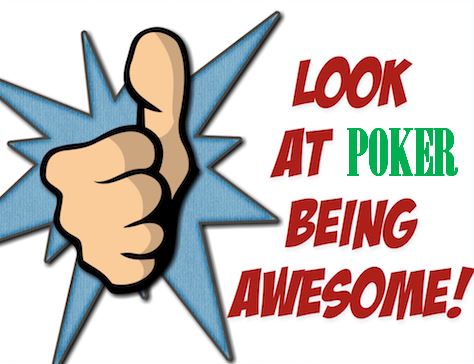 The final two remaining players in the 2018 WSOP Main Event gave us a heads-up match for the ages. John Cynn and Tony Miles battled for more than 10 hours before Cynn finally walked away with the Main Event bracelet and $8.8 million first prize.

We got to see these guys compete for 199 heads-up hands, with the lead changing 11 times and the game going until 5 a.m. before Cynn emerged victorious. This epic battle kept us glued to our screens and provided the kind of television drama that can only come from high-stakes tournament poker.

It was impossible to not be rooting for both of these guys, and the image of Miles raising Cynn’s hand in victory in the aftermath was one of the best of 2018.

Speaking of the Main Event, Joe Cada’s journey to a fifth place finish had us wondering if the 30-year-old pro could really pull off the unfathomable feat of winning the event twice in the modern era.

If we weren’t sure what to think of Cada after his run to the 2009 Main Event bracelet, we now know that this guy is one of the better tournament players in the world. Cada is now a four-time WSOP bracelet winner, adding two more to his collection in 2018.

He came very close to a third 2018 bracelet in the Main Event, and if his pocket 10s had held up against Tony Miles’ AK in Cada’s final hand, who knows what would’ve happened later on? Watching the final table while Cada was involved gave us some of the highest drama of the year as poker fans. Much like Cynn and Miles, Cada comes off as such a good guy that we really wanted to see him pull off the win.

It’s a great time to be a poker fan! There’s so much high-quality content coming out these days that’s it’s impossible to get around to watching it all.

PokerGO has revolutionized the game as a spectator sport; as seeing the high-stakes tournaments and cash games unfold live addresses a thirst never fully quenched by the post-production format we’ve been used to for years. Commentators like Ali Nejad, Nick Schulman, and Jeremy Ausmus really shine in the live format, and the chance to see literally every single hand gives us an unprecedented look into the minds of the world’s best players.

In addition to the abundance of live poker content, players like Joey Ingram and Andrew Neeme are regularly producing some of the most entertaining content revolving around poker news, commentary, and hand analysis. Poker fandom in 2018 means you’re never stuck with nothing to watch.

Tanking is quite possibly the most detrimental thing holding back live poker as a spectator sport, but the shot clock/time extension format is appearing in more high-stakes tournaments, and even cash games.

The shot clock adds another strategy element to the game and keeps the action moving. When players do decide to tank they have to use the time extension chips (much like the time bank in an online game), and this gives fans another layer of beat-the-clock drama in big hands.

It’s also fun to watch the time extensions being used as part of the overall strategy, as we sometimes see players use them in situations where they have the goods, but want to make their opponents think they don’t. The idea of the shot clock has been around for awhile, and in 2018 we’ve continued to see it as a staple of high roller events and WPT tournaments.

This could be just the beginning of a renaissance for the online game in the U.S., as Pennsylvania will soon begin to offer online poker as well, with the possibility of adding many more players to the merged U.S. pool.

Interstate play is here and with it comes the $15 million summer, including an upgraded loyalty program, bigger tournament guarantees, and 4 Online Bracelets. NV players, make sure to download the new client. Head to https://t.co/d6DW8pasid and click download on the main tab. pic.twitter.com/TADEwgedvX

The addition of Pennsylvania would double the size of the U.S. player pool, and with many other states beginning to legalize sports betting, and players already itching to grab free bets no deposit offers here, it could just be a matter of time before online poker is up and running across several U.S. states.

We’ve never really seen anything quite like the Moneymaker PSPC Tour, with PokerStars running live $86 buy-in tournaments across the U.S., each with a first-place prize of a $30,000 Platinum Pass package that includes entry into the $25k PokerStars Players Championship.

Tournament winners have a once-in-a-lifetime opportunity to compete at the PSPC in the Bahamas in January, and along the way they – as well as everyone else who participated at each tour stop – had the opportunity to meet and play with 2003 WSOP Main Event Champion Chris Moneymaker.

It was weird. Before the @CMONEYMAKER #PSPC Tournament @SHRThePokerRoom ended, we knew who was getting the #platinumpass. Andrés Risquez ultimately won the Pass *and* the tournament. That’s him with the guy who came in second. Full details shortly. pic.twitter.com/butEo1HPuu

If you’re an American poker player, it’s great to see Chris Moneymaker making the rounds, as he’s still one of the game’s greatest ambassadors and the embodiment of the poker dream. It’s also intriguing to see the PokerStars brand attached to a live poker tour in the U.S. Who knows what we can expect from them in 2019?

Moneymaker inspired us with his realization of the poker dream in 2003, but in 2018 author Maria Konnikova confirmed that the dream is still alive and well.

Konnikova knew absolutely nothing about poker when she set out to learn the game in 2017. Konnikova’s original plan was to learn how to play and spend a year on the tournament poker circuit, as part of a research effort for a planned book on the role of luck in life.

She started studying game theory, received training from Poker Hall of Famer Erik Seidel, and started playing events on the PokerStars live circuit. Konnikova’s plans for the book went on hold, however, as that studying and training started turning into success on the felt.

What an epic year it’s been for @mkonnikova! 😮 Having already secured a #PlatinumPass and won her first major tournament, we’re now proud to announce author and journalist Maria Konnikova as the newest PokerStars Ambassador. 👋🎉 pic.twitter.com/RY0uv5pOjy

Konnikova’s live winnings have eclipsed the $260K mark in less than two years of play, which includes a first-place finish in a $1,500 buy-in event at the PokerStars Caribbean Adventure in January.

That win earned Konnikova her largest career cash of $84,600, as well as Platinum Pass. Perhaps Konnikova will pull off the ultimate poker dream and book a huge score at the PSPC?!

We’ve seen tournament poker heaters before, but Justin Bonomo put on a show the likes of which seemed unimaginable in 2018.

His $25,428,935 earnings total for 2018 is the all-time best one-year total ever recorded in tournament poker. In fact Bonomo’s 2018 total is more than the legendary Phil Hellmuth has won in tournaments over his entire career!

Bonomo’s ridiculous 2018 put him on top of the all-time money list with over $40 million in career earnings. He overtook Daniel Negreanu for No. 1 on the list with his win in the One Drop, where he outlasted Fedor Holz heads-up and took home a $10 million first prize.

Still only 33 years old, it’s safe to say Bonomo will keep adding to his staggering career earnings total for quite some time.

partypoker really raised the bar of what’s possible in the realm of online poker tournaments in November, running the biggest online tournament in history with the $20 million guaranteed MILLIONS Online!

This $5,300 buy-in tournament guaranteed a first prize of at least $2.5 million, along with seven-figure score for the top four finishers. Astonishingly, the guarantee was exceeded as 4,367 entries competed for what turned out to be a prize pool of $21,385,000!

The official first prize ended up being $2,729,376, with the final two players, ‘Sheparentao’ and Pim ‘ForMatherRussia’ de Goede  chopping and each taking home about $2.3 million. All eyes in the poker world were on the MILLIONS Online final table, and the event has to be considered a massive success.

The Triton High Roller Series introduced poker fans to the world of Short Deck Hold’em, which had already been going strong in Asia for the last few years. The Triton Poker Series put the game on center stage for the rest of the world, and it looks like this fast-action and very entertaining poker variant is here to stay.

We got to see poker’s elite try to outwit each other in a poker format that no one’s really mastered just yet, and it was fascinating to watch. We also got to see the return of Phil Ivey and Tom Dwan to televised poker!

As an added bonus, the Triton High Roller Series spawned side cash games (in the traditional Texas Hold’em format) that produced some of the highest stakes and largest pots we’ve ever seen in televised poker. Players like Ivey, Dwan, Jason Koon, and Mikita Badziakouski mixed it up with some of Asia’s highest rollers in games that sometimes saw pots exceed the $2 million mark!

The Triton Poker YouTube channel has given poker fans something to look forward to, with weekly uploads that have us wondering what we’re going to see next.