There are over 358,000 people who currently subscribe to Daniel Negreanu’s YouTube channel. For the past 23 days, he’s produced a daily vlog of his experiences at the World Series of Poker Europe in Rozvadov, which is consumed by anywhere between 50,000-110,000 people per day (and counting). On the one hand, at this point, Negreanu’s daily vlog is something poker fans around the world almost “take for granted”, as he’s produced it for the past three summers now at the WSOP in Las Vegas. On the other hand, having one of poker’s top competitors and biggest names create this content is not something we poker fans ought to take as a given.

The fact is that aside from those players who we’d collectively group into the category of “professional poker vloggers” (e.g., Andrew Neeme, Brad Owen, etc. – those who became known via their vlogging), not a single other big name poker player has cranked out anything resembling the type and scope of video content that Negreanu has. 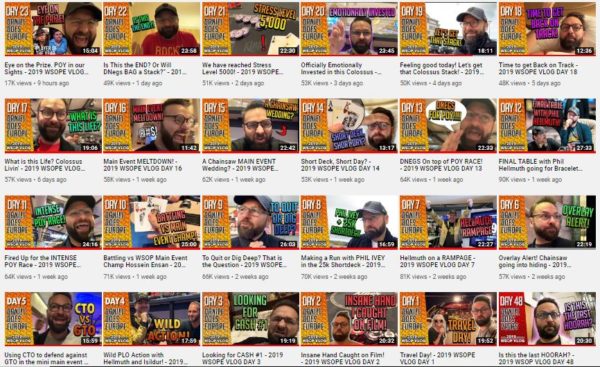 Without further ado, then, here’s what I – and I imagine hordes of other poker fans – will miss about Daniel Negreanu’s 2019 World Series of Poker Europe vlog.

Aside from Doyle Brunson, along with Negreanu, poker’s biggest names have long been Phil Ivey and Phil Hellmuth. Larger-than-life figures who transcend into mainstream recognition, there’s no getting around it: poker fans just love the Phils. While Hellmuth always gets plenty of exposure, Ivey has long been more mysterious and averse to media coverage. Capturing either Phil “in the wild” while playing poker (i.e., not on an official live stream or TV broadcast) represents the rarest type of coverage and closeness to the action we fans can get.

The @RealKidPoker WSOPE vlogs are entertaining and interesting enough on their own, but the recurring @philivey, @phil_hellmuth, and @AllenKessler interludes make ’em can’t-miss viewing! 😀https://t.co/KmD3vz4N9h#keepemcoming #teamnosmoking

Negreanu’s 2019 WSOP Europe vlog delivered this to us in spades. Longtime friends with both of the Phils, Negreanu’s casual on-camera chats with them show us all a side of Hellmuth and (especially) Ivey that we almost never get to see. It’s raw, highly enjoyable, and just plain awesome. Watch the video below starting at the 16:30-minute mark for about a minute and you’ll see exactly what I mean.

Living in Israel, one hour ahead of the time in Rozvadov, as a subscriber to Negreanu’s YouTube channel, I was especially fortunate. Like clockwork, I was pretty much guaranteed that I could wake up and find a brand new poker video ready for my viewing pleasure each and every day for over three weeks.

It’s been a really fun way to start the day, and truthfully something I’ll miss beginning tomorrow.

Travel Day! – 2019 WSOPE VLOG DAY 1: This time we’re off to Europe for the WSOPE and looking to take down more bracelets and the Player of the Year Title.https://t.co/ecHkMDJNxy

We got approximately 464 minutes (almost 8 hours!) of great poker media content. For free. Every day. Without fail. Props to Daniel’s video editor, Athena Froelich, for a job well done.

If you don’t know where Rozvadov is (Czech Republic), based on watching Daniel’s vlog you could be excused for thinking that it might be in Israel. In the majority of his 2019 WSOP Europe vlog episodes, Israelis are featured in some way or another, whether sitting and playing with Daniel at the tables, demanding asking for selfies, or even singing along to one of the world’s most underrated poker songs (watch starting at the 13:43 minute mark below).

Admittedly, my bias on this one is obvious, but aside from the local Czechs and Germans it seems that no nation has a more noticeable (or louder) player presence at the WSOP Europe than Israel. Knowing it is one thing, but seeing it captured on video each day is eye-opening to say the least.

Moreover, Negreanu’s grasp of Hebrew is surprisingly vast for someone who isn’t Jewish! As someone with a Master’s Degree in Linguistics who is fluent in Hebrew, I know that it’s not uncommon to know bits and pieces of a few Romance languages, but having that much knowledge of a Semitic language is quite impressive as it’s far harder for someone to learn with English as their native language.

Anyone who has been a hardcore poker fan for a number of years is familiar with Allen Kessler. The structure samurai. The min-cash maven. The comptroller of casino comps. He’s the poker grinder you just can’t help but love.

That said, Kessler’s notoriety shot into the stratosphere over the course of the past few weeks due entirely to his inclusion as one of the recurring “characters” in Daniel’s vlog during the Chainsaw Corner segments. From advising Negreanu on GTO POY strategy to illustrating the best way to maximize a free buffet, the newly dubbed “consiglieri” was one of the WSOP Europe’s most buzzed about players.

Can we hold off on Rounders 2 for just a bit as the next great poker movie @briankoppelman ? I need a @RealKidPoker @AllenKessler buddy comedy first.

I heard they’re renaming the buffet itself to “Chainsaw Corner” 🤣

He Made Us Care about the WSOP Europe and POY Race

For all its flaws (and it certainly seems to have a number of them based on what Poker Twitter has to say), winning the World Series of the Year Player of the Year race is still one of the game’s great achievements. With that said, it’s admittedly tough, even for a hardcore poker fan like me, to care much about the Player of the Year Race. The same, unfortunately, goes for the WSOP Europe, which is a far smaller scale event than the WSOP in Las Vegas and just doesn’t have the same electric vibe.

I think the common denominator regarding the above is that it’s tough to “feel involved” if you’re not on site and experiencing the events in person. Negreanu’s vlog completely turned that feeling on its head! With tens of thousands of people tuning in each day to watch the race and get the updates from Daniel’s perspective, it felt like we had “a horse in the race” (Daniel’s investors actually did!). Plus, all of us who’ve never been to Rozvadov now have almost as much de facto familiarity with the King’s Casino in Rozvadov as we do the hallowed hallways of the Rio in Las Vegas.

Of course, honorable mention here goes out to Robert Campbell and Shaun Deeb for keeping the Player of the Year race interesting all the way down to the wire. It was a fiercely fought battle and the three main contestants gave us all worthy competitors to actively root for.

While there is no cash prize for WSOP POY, poker is my passion.

The title is the achievement and acknowledgment of a lot of hard work, long grueling days against top competition.