Money changes hands freely in the poker community, and not just on the felt. Staking is a very common occurrence in the poker world. There are many types of staking deals in poker. Unfortunately, there are also numerous ways these staking agreements can go wrong. First, let’s establish what staking is and describe the various ways people buy and sell action. 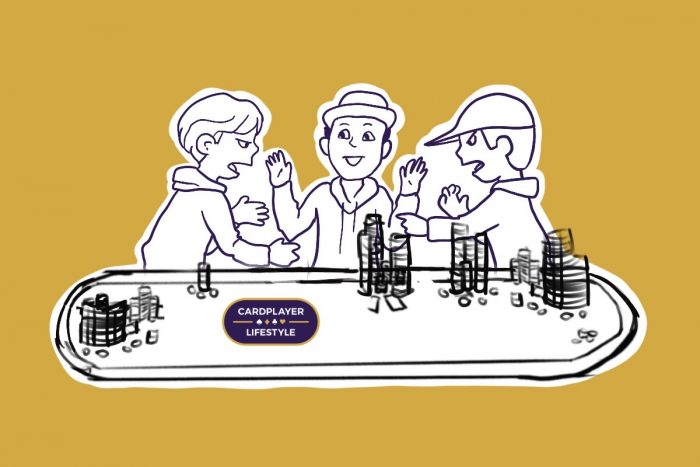 Staking in poker is when someone other than the player puts money toward the player’s buy-in. This happens in both cash games and tournaments, though it is more common in tournaments. The amount of money paid relative to the total buy-in directs the split of any profits. For example, if someone wants to enter the $10,000 WSOP Main Event but they don’t have $10,000 to put down, they may decide to commit $5,000 and “sell” the rest of their action to someone else. If the player cashes the event, they receive 50% of the payout, and the individual they sold action to receives the other 50%.

Simple enough right? Well, like most things, the cookie-cutter example is simple, but many variations of staking are possible.

Selling Action or a One-Time Stake

The above is a perfect example of selling action as a one-time poker staking agreement. Players usually sell action when they want to take a shot in a bigger game than they can afford. This is more common in tournaments, where someone may be used to playing $50-$150 daily tournaments at their local casino but wish to fire in a $600 bracelet event. You may be wondering “why sell 50% of your action in a $600 tournament if you can just play a $300 one instead?” Well, the larger buy-in tournaments tend to attract more players, building a larger prize pool. So where a $150 local tournament may have a top prize of around $3,000, the $600 NLH Deep Stack WSOP event in 2019 had a top prize of $398,281. Sometimes it is better to sell action to get into a bigger tournament.

Some tournament players may sell a percentage of their “tournament package” for an upcoming series. You’ll see tons of people staking poker players during the WSOP and it is typically done by selling a package. This happens when the player will group together a number of tournaments they want to play and the maximum number of times they will enter. For example, a tournament package may look like this:

The total value of this package is $6,300. If the player does not use both bullets in all the tournaments with “x2” next to them, the percentage bought for those will be refunded. So if you wanted to buy 10% of this player with no markup it would cost $630. As the person staking this poker player, you would receive 10% of the total cash payout across all tournaments.

Be wary of markup. It is common for people to sell at somewhere around 1.05-1.2 times their buy in, meaning you pay a 5-20% premium on your action. If the above player was selling at 1.1, 10% would cost you $692 instead of $630. This is typically done by winning players, as they believe they have a 10% edge over the field. The rationale is that you are more likely to win money buying their action than playing the events yourself. Sometimes players will overvalue their edge or bloat the markup if they don’t have an understanding of how it works. Do your due diligence and make sure you are paying a fair price.

READ MORE: Top 10 Reasons You Should Consider Getting Staked to Play Poker

Long-term backing happens when a poker player has a backer for all of their poker endeavors rather than for a specific game or tournament series. Poker backing generally is the same as staking, except the profit share is different. A standard backing deal usually involves the backer paying 100% of all buy-ins for 50% of the profit. This is more often seen with cash players, but there are plenty of tournament players who have backers as well.

Another key difference between individual and long-term staking is that makeup is involved. Makeup is when the player has to pay back losses out of future winnings. When a player goes into a deficit while being backed, their cut of the profits goes toward paying off the makeup balance until they are back in the black. Once the deficit has been erased, the 50/50 split resumes. Many backers will not take all the profit when the player is in makeup, so the player can still pocket some money, but the percentage the player keeps will typically be less than 50% during that time. The makeup split could be as low as 10%/90%, with 10% to the player, 40% to the makeup balance, and 50% to the backer. Makeup agreements can vary widely depending on the player and the backer.

There are many benefits to staking poker players for both the backer and the player. The player gets to play in bigger games that they can’t normally afford to play while reducing their variance. If you are comfortable with $100 tournaments and $1,000 cash games, you may be thrown off entering a $1,000 WSOP event or a $10/$20 uncapped cash game. By selling action you are reducing your variance and playing for money you are more comfortable risking. The person buying action gets the benefit of potential winnings without putting in any work themselves. Backers are like stock traders, but instead of buying shares in Apple, they are investing in a poker player’s ability. If you know a good player who doesn’t have a large bankroll, you can invest in them to play in bigger games and get a cut of the profits. There are entire companies dedicated to buying action, and even online marketplaces for players to buy and sell action.

While buying and selling action is very popular, there are a number of ways these agreements can go wrong.

1. The Staker Refuses to Pay

One way a poker staking agreement can go wrong is when the person buying action simply refuses to pay. A player could propose selling 50% of their tournament buy-in to a number of people. Usually, multiple people will buy less than 50%, so the player could end up selling 10% to 5 different people to hit their 50% sold mark. Many times these arrangements are handshake deals or sealed by a quick text confirming backers want to buy action. Once the tournament ends, if no money was exchanged beforehand the backer may not be legally obligated to pay up. Unfortunately, there are some backers out there who may renege on the deal.

Always get all money upfront and get written confirmation of the arrangement. Even if you trust your backer, it is best practice to have everyone send money before you sit at the table. This way the backer can’t renege on the deal. Getting the numbers in writing is important to ensure everyone agrees on the deal. If you booked action on a phone call, it is easy for someone to misremember the amount they bought. To keep everything above board, collect money before the game, and have written confirmation of the agreement.

2. Taxes Are Not Split Accurately

Taxes suck. No matter where you live or what you do for work, paying taxes is annoying, especially if you are self-employed. Taxes for poker players can be extra annoying since some casinos withhold taxes from payouts above a certain amount. Each state in the US has different requirements, and tax calculations are even more painful if you cash tournaments in a foreign country. With many different factors in tax calculations, sometimes players and backers can end up paying the incorrect amount.

Consult a tax professional if you have a significant win with backers involved. Going to the pros will make sure everyone pays their fair share in taxes and nobody misses out on their profit. Most tax professionals will tell the player to send 1099 forms to the backers so everything is on paper and legitimate. Going by the book and consulting a professional will ensure taxes are paid properly by the right individuals.

While not common, sometimes a player can end up selling too much action for a tournament. There have been stories of a player looking to sell most of a tournament, maybe 80-90% of it, and they reach out to several individuals. After collecting funds or written confirmations, they may not be aware that they sold 110% of themselves. If the player were to cash the tournament, they would lose money. On the other hand, they would profit from busting. Of course, this would be a nightmare if they came in first and realized they were going to lose 110% of the first-place money. When this happens accidentally it sucks for everyone involved. Some not so honest people out there may try to purposefully sell too much action and bust the tournament so they can profit. This is even less common than the accidental oversell, but it is always good to be mindful of who you are doing business with.

READ MORE: Everything you always wanted to know about selling poker action, but were afraid to ask

As the player, you should keep meticulous records whenever you’re selling action. Once the money has been paid, write it down! If you are recording verbal confirmations, keep a spreadsheet and send a confirmation text or email. This way you can visualize how much you have sold and how much you have left to sell. If you are the one buying action, ask the player to see the breakdown of what they have sold. If they cannot provide one right away, they should go back and check with other buyers and get a total that way. (And you should think twice about your purchase).

The key takeaway for preventing staking agreements from going wrong is to keep meticulous records, get the money upfront, and loop in a tax professional when needed. Buying and selling action should be treated with the same care as any business. There are registered companies dedicated to buying and selling, but you don’t need to be one of them to conduct your staking agreements professionally. Transparency is key when conducting any business, so you should be as transparent as possible with poker staking.