Most poker players dream of playing in the Main Event at the World Series of Poker. The opportunity to play with the best in the world is enticing enough, but you also get to play with them for the most coveted prize in poker. Millions of dollars, television cameras everywhere, and bragging rights in your home game forever if you manage to simply make the money. 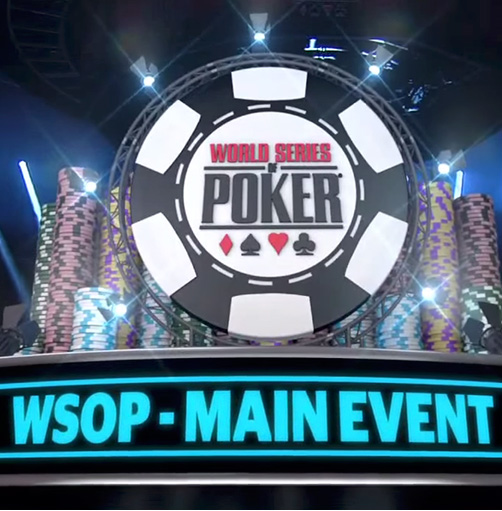 The biggest event in all of poker; the WSOP Main Event!

I won’t tell you that it isn’t fun. It is. It’s a wild ride, the most fun you can have playing poker. The experience of finishing in 32nd place last year out of more than 7,000 entrants is one I’ll never forget. But should you really drop $10,000 on a single tournament buy-in? Not unless you would spend that $10,000 on a similar vacation experience. If you wouldn’t spend ten grand on a fantasy baseball camp or a few rounds of golf at Augusta with a famous pro, you shouldn’t spend it on a poker tournament. Most players are better off playing a few smaller events and some daily tournaments at the Rio during the WSOP than buying directly into the Main Event.

However, that doesn’t mean you can’t play in the biggest event of the year. 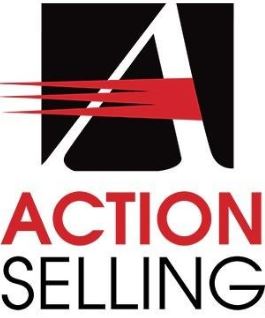 Many players who play “the big one” manage to snag a seat by selling action. This means that other people pay a portion of their buy-in and get a piece of any winnings. If you are an established player with some nice wins under your belt, selling action can be easy. Known pros just talk to a few friends or post on Twitter and sell whatever action they need. For a lesser known player, selling action can be tough, especially if you are trying to sell enough action to play a big event.

People selling action on twitter be like: “Felt really good today, really in the zone. Did some great work on my game recently and feel I’m playing better than ever. Selling all WSOP NL Action at 1.5 and all PLO action at 1.75. Small discount on larger pieces. pic.twitter.com/t7HmApc4Pw

Before we start talking about how to sell action, let’s talk about what it means and how the deal works.

What this means is that you are going to play $20,000 worth of tournaments and for every $100 of action people want to buy they will have to pay $120. That’s called “mark up” and it is typically charged by better players who can get a premium because they have a high win rate. Of course, selling action isn’t just limited to the WSOP Main Event. You can sell action for any tournament run by any operator at any buy-in level.

If you are unknown you will likely have trouble getting a mark up and should probably just sell at 1.0 or “no markup.” If you have more than $200,000 in winnings reflected on your HendonMob.com profile, you may be able to sell at 1.1. If you have $500,000 and are a well known player, you may be able to sell at 1.2 or higher. The only way to know is to ask a few people who know the game and give it a shot. Start low your first time. If you sell out quickly and do well, you can charge a higher markup next year.

If you sell a package of events rather than just one tournament, you will usually generate more interest because people like having multiple chances to win and it cuts down the likelihood that they will get nothing back. When someone buys 1% of your action, they get 1% of your total winnings for the package or for the specific tournament.

Get the money: Always get the money before the first event in your package starts. Always. ALWAYS! If someone wants 5%, but they have not paid you for the 5% before you start your first tournament, text or email them letting them know that they do not have a piece of your action. Do not break this rule. If you bust out of your first few events, they are very likely to change their mind about buying action. If you win your first event, they will definitely want their 5%. You are just letting someone freeroll you. It is no fun to try and collect money from someone after you have lost money on your package. Let everyone who is buying action know that they must have money to you by a certain date, hopefully at least a week before the first event, or they won’t have any action.

Update your backers: If you want people to keep buying action from you, keep them updated on your progress. Even if you are just messaging to let them know that you busted out of an event and will be playing another event the next day, they will appreciate the information. Many people are buying action as much for the vicarious thrill of playing along as anything. They want to win of course, but what they really want is the sweat. Make them happy.

Process refunds accordingly: If you end up not playing in an event, that percentage of the package should be refunded to your backers unless you have specified that you will play other events to make up any events that you miss. Play it completely straight. The first time you play around with their money will be the last time they invest in you. Tell them what you are going to play, play those events to the best of your ability, and keep them updated and your backers will likely invest again even if you don’t make them money the first time.

Be responsible: Since this is someone else’s money, you have a responsibility to them. You can play with your own money on short sleep, while you are drinking, and when you are tilted. With someone else’s money you absolutely cannot do these things. If you aren’t responsible with their investment, they will never invest again.

“Show them them money!”: When you are talking to potential backers, tell them that you will pay out winnings within one week of the end of the last tournament. No later than that, and not during the package. If you have a big score and haven’t made this clear, your backers will show up wanting their money in the middle of a tournament. I guarantee it. It’s happened to me many times.

When I won my bracelet in 2014 I had 18 people who bought a piece of my action. When I had the bracelet sized to fit my wrist, I had the extra gold cut into 18 pieces and they each got a piece in a glass vial along with a thank-you card. Those people have always been ready to invest in me again whenever I need it. Treat your backers this way and you will never have to worry about selling out a package. People will beg for the chance to buy action from you if you have a reputation for being professional and profitable. 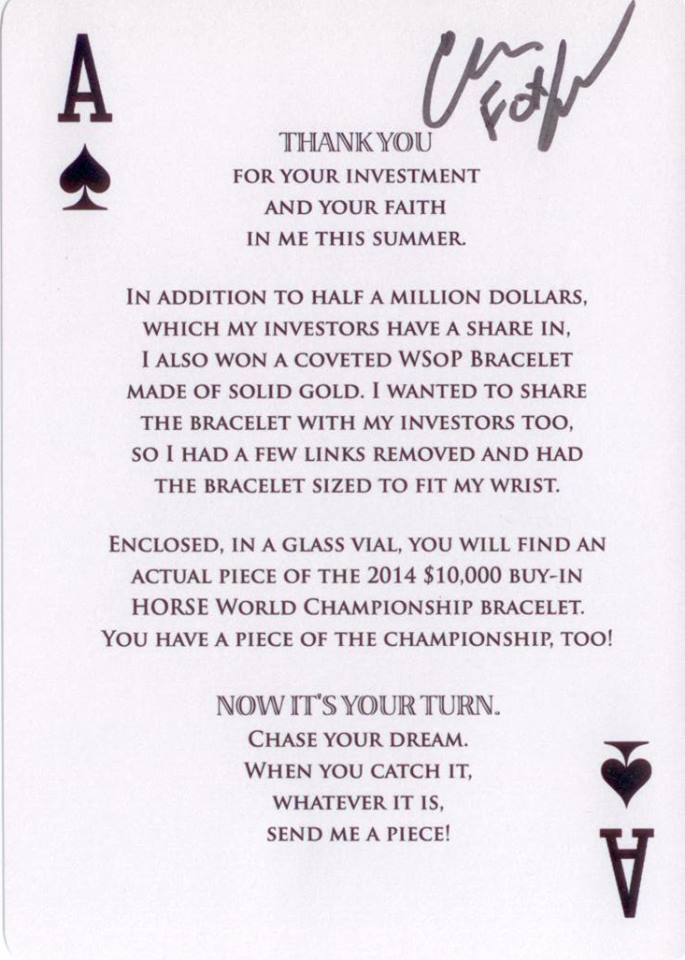 Record Keeping, Processing Payments, and Don’t Forget about the Taxman

When you have a big score, you will need to deal with taxes. Each of your backers should be aware that they will be responsible for their own taxes on any profits. You will be sending them a 1099 form with their net profit on it and they will be responsible for paying taxes on it as income. As long as they know this is coming they won’t complain about it because they made money! I have done this myself a few times; it’s not a big hassle, but now I have my accountant do it.

Dealing with a big win can be a hassle, so find an accountant who understands gambling. I recommend Kondler CPA in Vegas. They will answer questions for you for free; just call them at (702) 433-7075. They have been great with my taxes and they really know their stuff. It saved me a lot of money to have them dealing with my taxes instead of doing them myself.

When you book a win, pay your backers on time and in full. I like to send out payments within a few days of the end of the package. Unless you know and trust your backers completely, pay with a check, bank transfer, or PayPal. Thus, there will be a record that they bought some action, whereas if you just hand them cash you could lose a lawsuit when if claim they were never paid and you don’t have any proof that you paid them. I recommend putting together a spreadsheet with the events in your package, the buy-ins, and the total action for sale.

Finally, don’t sell too much action. You don’t want to win a million dollars and walk away with crumbs because you sold all of your action. Buy your own action up to what you can reasonably afford and sell the rest.

Good luck selling action. Start small, be professional, and play your best. The rest will take care of itself. I’ll see you at the tables!