I’m releasing this video a bit later than I had hoped to, but I suppose it’s better late than never. I’m not a highly skilled vlogger by any means, but for the first time I went into my latest poker trip (to EPT Barcelona) with the advance idea in mind of making a video like this (rather than just saying to myself after the fact “ah, let’s do a video”). I didn’t produce the video to enter into any sort of vlogging competition, like the kind Jeff Gross and Andrew Neeme are holding to give away a Platinum Pass, or with the thought of moving into vlogging on a regular basis. I just thought it would be fun to have another way of documenting my experiences and sharing it with you, the Cardplayer Lifestyle audience.

I didn’t have any special “vlogging equipment” other than my smartphone, but I did aim to tell a story. With the help of my buddy Yishai who did the editing, I think we managed to accomplish that.

Made it to my first #EPTBarcelona 😃

Let’s get the 🎉 started!

Over my nearly five days in Barcelona, I sure spent a lot of time in the casino. Of course, I watched a lot of the tournament poker action, including the high roller events that featured some of the best-known players in the game. I managed to withstand the temptation to play casino games like blackjack and roulette, although I must say it was particularly tough to avoid the video poker machines, as I have a particular penchant for them. I scratched my itch to gamble by logging a couple sessions at the €5/5 NL Hold’em tables, and cashing out for a total win of over €450. Huzzah!

Finally built up the courage to play 5/5 for the first time (EUR by the way)… 90 minute session, did better than I’d hoped for 😃

You don’t have to be a huge winner in poker to feel like one. Followed up last night’s first ever EUR 5/5 NLHE game with a second session and I felt comfortable the whole time,

I had mentioned in my pre-trip article that one of the things I was looking forward to was reunions with friends and colleagues. It was, indeed, a pleasure getting to meet PokerStrategy’s Barry Carter and CalvinAyre’s Lee Davy in person for the first time, as well as having multiple great conversations with Pokerfuse’s Mike Gentile. Plus, as always, joking around with a bunch of great people in the media room as we worked was loads of fun. 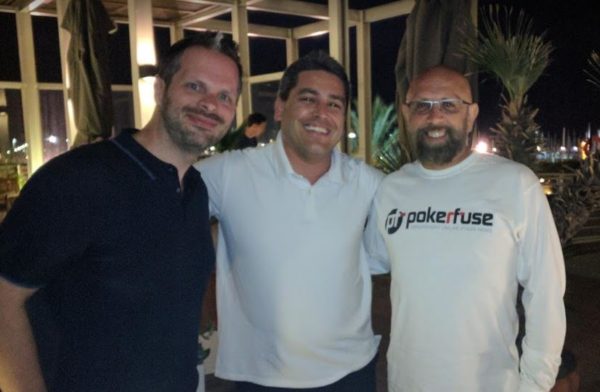 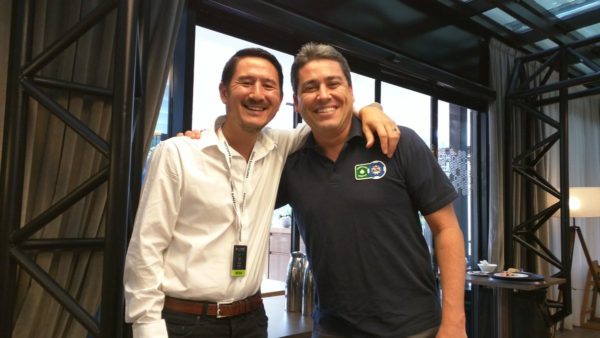 Me and Lee Davy mugging for the cam

During the event proceedings I got to chat with a number of members of the PokerStars team, who work hard to pull off Europe’s largest annual poker festival, as well as interview Team Pros Igor Kurganov and Jaime Staples.

Aside from the work, I also made sure to try and experience the Barcelona city vibe. To that effect, you’ll see that part of the video also includes some flamenco dance scenes and vistas of the beaches. I got to see more of the city during my lengthy walking excursion on the Sabbath. No pics or clips of that, I’m afraid, but I did write about the experience.

I took another short trip out to the city’s main boulevard, Las Ramblas, for a lovely kosher meal on my last night in town. Rather than take a cab there, I decided to walk the 20 minutes or so to the restaurant, so that on the way I could capture some pictures and scenes on the streets, which you’ll see towards the end of the video.

Thinking back to the awesome dinner I enjoyed at the Maccabi kosher restaurant on my last night in Barcelona. Good food. Good times. pic.twitter.com/fAOsBvC6MO

Though each day of the trip was pretty packed, it seemed to end very quickly, and before I knew it, I was back home giving souvenirs to my kids. Until next time…. or, as they say in Barcelona, “¡Hasta luego!”

Three Strazynski kids are VERY happy their Daddy is back from Barcelona 😃 pic.twitter.com/Wp1ajT3MtI