Joe Hachem Runner Up at The Big Event at the Bike

In what was supposed to be the next stop of the PokerStars North American Poker Tour (NAPT), the renamed “Big Event” at the Bicycle Casino in Los Angeles still attracted hundreds of players and plenty of poker’s biggest names, among them former World Series of Poker Champion Joe Hachem. 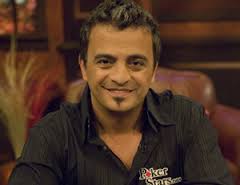 With the poker series’ $5,000 buy-in main event losing its NAPT branding due to California regulatory concerns, along with ESPN television coverage, there were concerns that the Big Event might not end up being that big after all. Depending on who you ask, that assessment may or may not be a correct one.

With that said, not one, but two of poker’s biggest stars came to the rescue, however, in the form of Hachem and pro player Victor Ramdin, both of whom advanced to the tournament’s final table. In a dream scenario, the pairing ended up facing each other heads-up with the title hanging in the balance.

After a prolonged battle, Hachem was unable to overcome the cards and play of Ramdin, who secured the victory and $500,000 first prize – his first 6-figure cash in about five years. Hachem, for his part, won $300,000 for finishing 2nd, his largest cash since his WPT victory in 2006 that netted him $2.2 million.

I still can’t get over the fact that Hachem used to be a practicing chiropractor. Think about that for a minute. Talk about a career change! Maybe there are other future World Series of Poker World Champs lurking out there who are just waiting for their first big score – maybe it’s your barber, dentist, teacher, or even favorite poker blogger?! Who knows… All I know for certain is that Joe exemplifies precisely how winning the Main Event is life changing.