Since Black Friday decimated online poker in the United States, many former online poker players have tried to ply their trade at brick and mortar poker rooms around the country. While some of these players have met with success, others have failed to make the transition smoothly. Those of us who had played live poker regularly before Black Friday can usually spot the online poker players a mile away. Here are 17 things you can look for that’ll help you identify “the online guys” sitting with you at the felt. 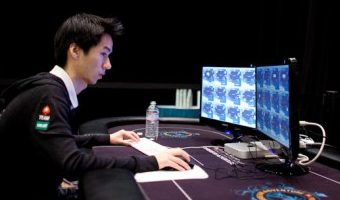 *Ed. note: This list was compiled with my tongue firmly implanted in my cheek 🙂

1. They shuffle their chips on Poker Padz (see pic below).

2. After losing a hand, they yell out: “this game is rigged!”

3. Someone tells a funny joke at the table, and while everyone else is laughing they just say “lol” or “ROFL!”

5. Instead of calling for a floorperson, they ask for a moderator.

6. They’ll be really stingy about tipping dealers, but will always tell them to “ship it” when they win a pot.

7. When registering for a tournament they’ll ask the poker room manager whether it’s an SNG or MTT.

8. Upon arriving to the poker room, they’ll ask around to see if there are any Badugi or Deuce–Seven Triple Draw tables running.

9. After losing a big pot, they challenge the winner to a heads-up match.

10. During a poker tournament they’ll need to take a 5-minute break every hour.

11. After a 12-hour session, they’ll quit and announce they need to head home for some “scheduled server downtime”.

12. They’ll say they’ve been playing poker professionally for 8 years, even though they just turned 21.

13. They’ll justify a bad call by claiming it was a “misclick”.

14. They keep referring to the big stack at the table as “villain”.

15. With the bubble looming in a tournament, they’ll ask if everyone wants to chop according to the ICM.

17. They’ll take a look at the bad beat jackpot display and say “I made more than that in rakeback last year”. 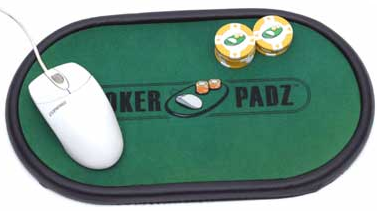 Did anyone ever actually buy one of these?

Can you think of some real tells that online players tend to have at live poker tables? Go ahead and share them with us in the comments section below.