Even with the COVID-19 pandemic still raging, the Women’s Poker Association (WPA) made a point to come together to hold a spectacular week-long virtual celebration in lieu of it’s previously planned annual series of in-person gatherings. Events during the “virtual ladies week” included featured interviews with well-known poker pros like Jamie Kerstetter and Joey Ingram, industry spotlights, poker training sessions with Alex Outhred, and more,

The festivities culminated in the WPA Virtual Excellence Awards Gala, hosted by the organization’s Board of Directors, that was held online at the end of last month.

The WPA is an all-volunteer professional organization for female poker players, and they coordinated the event as an opportunity to “come together to experience a virtual version of mingling, friendship, game talk, poker news, strategy, coaching and camaraderie,” according to a WPA press release.

Table talk with a digital twist

The WPA 2019 Excellence Awards Gala was originally set to take place live in Las Vegas. Since the live ceremony unfortunately had to be cancelled due to COVID-19, the Women’s Poker Association wanted to make sure that individuals and industry partners still received recognition for the extraordinary achievements and support provided in 2019 for women in poker.

Close to a couple dozen honorees, a full listing of whom can be seen on the WPA website, were recognized in the hour-long ceremony as recipients of Excellence Awards, Humanitarian Awards, Rising Star Awards, and Industry Innovators and Contributors. Of particular note, Veronica Brill was recognized as the WPA’s Industry Voice of the Year, in a nod to her role as the courageous whistle-blower in the Mike Postle scandal.

It’s so incredibly humbling to be recognized in this way by the WPA. I consider it not just a responsibility but a privilege to be an ally of women in poker, and Cardplayer Lifestyle has always been and will always continue to be dedicated to highlighting the great women in our game and our industry.

Finally, the WPA awarded their Player of the Year distinction to Ruth Hall for climbing to the top of the WPA tournament leaderboard and earning the title. “I’m humbled to end up on top and encourage more women to get into the game!” said Hall, who also sits on the WPA Board of Directors. She is a two-time breast cancer survivor, and uses her poker platform to share the message for women to do their annual exams and in doing so, saving lives.

Boasting over $230,000 in career winnings, clinching the Women’s Poker Association POY title represented another notable poker accolade for Hall, who boasts a WSOP Circuit Ring and a LIPS Grand Series gold bracelet among other titles. For her achievement, Hall was presented with a specially designed ring that she added to her “jewelry collection”. 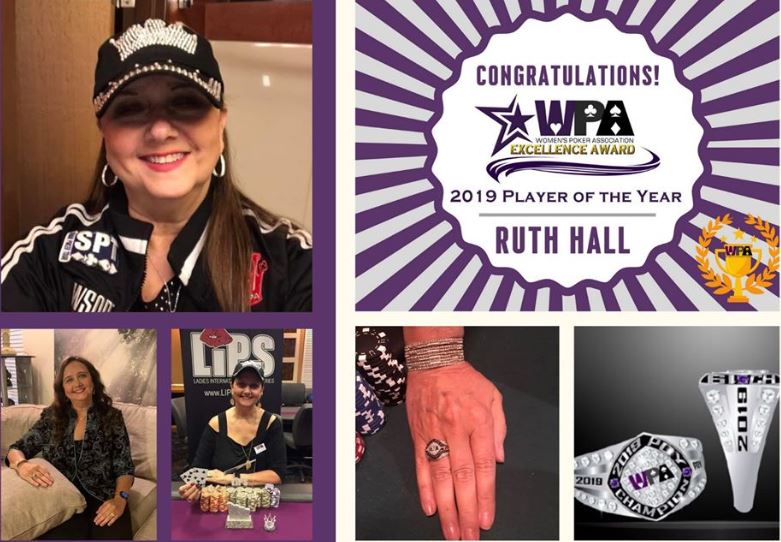 For those who missed the Virtual LIVE Gala, the video can be watched via the Women’s Poker Association YouTube channel (clip embedded below).