Home POKER OP-EDS Who Will Step Up and Offer the Best Poker Job in the World?
POKER OP-EDS

Who Will Step Up and Offer the Best Poker Job in the World?

A couple months ago, one of the buzziest topics in the poker world was that of “poker is dying”. As you may recall, the issue played itself out across numerous poker media sites and forums as well as all across social media, with many players, professional and recreational, chipping in with their two cents on the matter. My contribution to the discussion was a piece entitled A Guaranteed Way to Revive the Dying Game of Poker. The main thrust of my argument in the op-ed was that the game of poker needed to receive a brand new injection of excitement via a dedicated ambassador of the game. Pointedly, this ambassador wouldn’t de facto be appointed to his/her post by virtue of their being a winner of the WSOP Main Event, but rather based on more modern-day “ambassadorial qualifications”. These would include a passion for the game, the natural ability to entertain and engage recreational players and new potential poker fans, and ability to spread enthusiasm for poker both via in-person encounters as well as further afield via social media outreach.

In laying out the responsibilities for this poker ambassador, I entitled the promotion “The Best Poker Job in the World”, modeled after what was done in Australia back in 2009. While the idea was a “global one”, I specifically targeted it at those in charge of the WSOP, figuring that, as the strongest brand in poker, they were ideally suited to utilize the promotion for the benefit of the game.

The Idea Takes Hold, But Not How I Had Originally Intended

My idea attracted a pretty sizeable amount of interest, including the eyeballs of some important figures in the poker industry. Nolan Dalla, the WSOP Media Director, was even kind enough to highlight the article in an essay of his about poker journalism. As of right now, that op-ed piece has been the second-most-read article here at Cardplayer Lifestyle since it was published (it’s kind of hard to out-traffic a Phil Ivey interview). 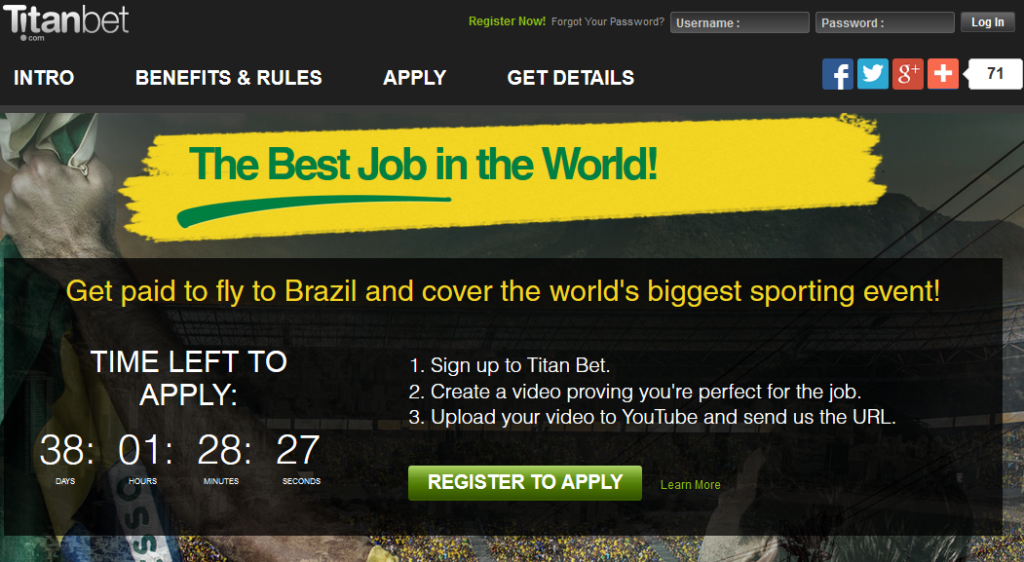 Lo and behold, it seems as though someone else in the gambling industry may have read the post as well.

Just a few hours ago, the good folks over at Titan Bet, a sports betting operator, launched their “Best Job in the World” promotion – not at the poker felt, but rather at the soccer pitch. Pretty much mirroring my outline and conceptualization for the promotion, they created a contest that will reward one winner with an incredible grand prize of a job to attend the upcoming 2014 World Cup in Brazil. The rundown of what the winner gets includes:

In return for landing this granddaddy of a job, the winner’s responsibilities would be:

And how, precisely, would someone win this contest? Just as I suggested in my original post, they’d basically have to submit a short “application video” explaining why they’re the best fit for the position and eventually be chosen as the most fitting candidate by a selection committee.

Grandiose and noble as some ideas may be, sometimes they’re just a bit too far-reaching to actually materialize. Trying to “revitalize the entire game of poker”, as I had originally imagined, may indeed be a cause worth working towards, but in retrospect I realized it’ll never happen because there’s no specific poker outfit that would benefit from it. For a “Best Poker Job in the World” promotion to work, it has to directly benefit the company/entity staging the promotion. My “aha” moment came when I saw Titan Bet’s dedicated webpage. I instantly said to myself “Wow! Everyone’s going to know who these guys are now…”

That sort of branding and buzz is precisely how a specific poker company would benefit. The benefit to the game of poker, as a whole, would be tangible as well, but not necessarily central to the promotional campaign.

Try It at the World Series of Poker

While the WSOP might be uniquely equipped to sponsor this sort of a contest in terms of naming an official poker ambassador for a calendar year, as I originally suggested, a parallel alternative to this would be a different poker company offering the “Best Poker Job in the World” to a contest winner who would set up shop at the World Series of Poker itself over the summer. Offering a similar prize package (flight, hotel, gadgets, local transportation, a salary, and other perks) with similar “fun” responsibilities (blogging, taking selfies with poker pros, social media activity) would certainly generate buzz for the sponsoring company in advance of the competition, provide them with great, unique content about the WSOP to share with their audience, and of course be the “Best Poker Job in the World” for the applicant lucky enough to be selected.

Of course there are numerous prestigious poker tournament series and festivals all over the world throughout the year where this idea could be replicated, albeit on a much smaller scale. The fact is that for the promotion to achieve its maximum potential of success, there’s no better way to go about it than on poker’s biggest stage, at the WSOP in Las Vegas.

Laying Down the Poker Challenge

There are tons of online gambling sites out there these days that focus on poker as well as companies that have more of a focus on land-based poker, poker products, etc. While they all obviously desire to promote the game of poker, they’re all clearly also in some form of competition with one another. It probably isn’t much of a stretch to imagine that each poker outlet is looking for new innovative ways to stand out among the crowd and make themselves unique. Well, I’m pretty sure I couldn’t have laid out the winning idea more clearly. Taking on this type of contest is sure to vault the sponsoring company into the poker stratosphere. 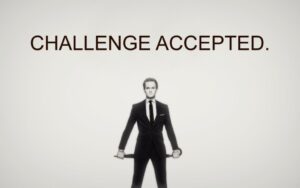 I suppose the only question that remains is who is going to step up to the plate, market this promotion, and “revive the dying game of poker” while riding a tidal wave of goodwill and excitement from the poker community?

Best Poker Job in the World