What Is Range Merging?

If you are familiar with poker forums or read advanced material online, you may have come across the term “range merging” before. It’s probably a strategy you have used at the table without going too deep into the tactics behind the play. 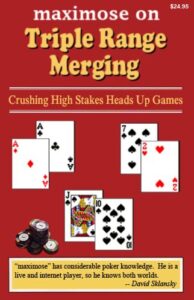 This strategy is used after the river card is dealt in flop games. You will bet big at this stage with a medium-strength hand. This will send a message to your opponent(s) that you either are sitting very strong with one of the top-ranked poker hands or that you are bluffing. More often than not, at least one of your opponents will think it is the latter.

With range merging, you give yourself two chances of winning. If nobody calls your bet, you win the pot without having to sweat it out until the end. If the pot is a considerable size at this stage, it’ll be a big win for you as your medium-strength hand may not have been good enough by the time the turn card is dealt.

The second possible result of range merging is that someone will call your bet. They are doing so with the view that you are bluffing. Therefore, in most cases they have a weak hand themselves but they probably feel they have enough to beat your bluff. They will be surprised to see at the end of the play that you have a set hand and go on to win the pot – if, of course, everything works in your favor.

The best players in the world will use range merging at least once at a major tournament, probably even more often if it’s an online tournament, due to the significantly higher number of hands dealt out. For instance, if you plan on railing the 5th anniversary edition of the Mega Deep, ask yourself whether one of the players around the table is using range merging. Once you understand the strategy, it is easier to spot it in open play.

How to Most Effectively Use Range Merging

It is very important not to overuse range merging, otherwise good players will identify it quickly and it may end up having the opposite effect. Like all strategies in poker, you want the element of surprise therefore if you use it at the right moment, it is more likely to be successful. 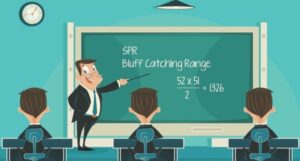 Whenever you sit down to play at a table and are up against players for the first time, it is useful to look out for bluff catchers. As the name suggests, these are players who are happy to call big bets when they feel they are seeing someone trying to bluff.

Bluff catchers are exactly the same people who will call your range merging bet. It is a dangerous approach as if they get it wrong, they are likely to lose a large chunk of – if not their entire – stack (if they have gone all in).

The ideal time to use range merging is if there is one bluff catcher still at the table who is committed to the pot. Usually – probably 90% of the time, as a matter of fact – they will hang around and are more likely to have a weak hand than your medium-strength hand; therefore it normally ends up working in your favor.