The all-time money list is one of the more common ways that poker players and fans determine who is the best. While this certainly isn’t the only way to gauge how good a poker player is, lifetime tournament earnings certainly can tell us a lot about a poker player’s skill. Sure, some poker players in the top 100 of the all-time earnings list have only had one huge score (see also: Gold, Jamie), and many players in the top 50 have earned the bulk of their winnings in super high roller tournaments with limited field sizes and astronomically high buy-ins, but when we look at the top names on the all-time money list, it’s very much a who’s who of poker. 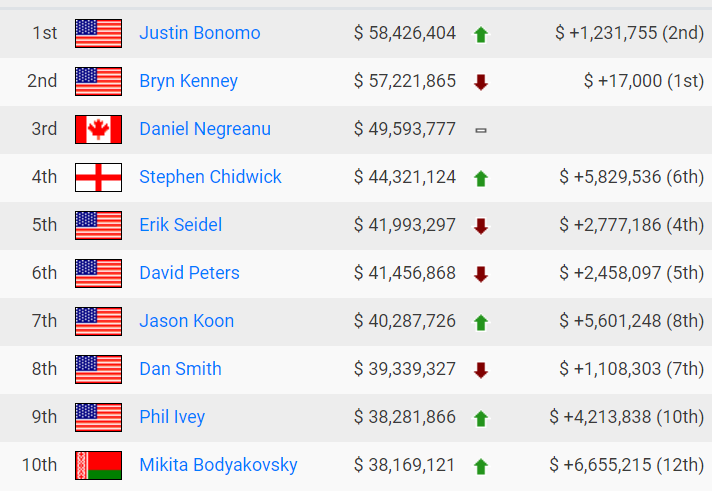 All results and figures courtesy of Thehendonmob.com

If you fantasize about some day perhaps making it on to the all-time poker money list and are looking to start your journey towards the top, it might be best to first test the waters online and build yourself a bankroll online, so you should look for a good poker bonus code and grab a sign-up bonus as well if one’s available at a reputable site.

In the meantime, we’ll take a snapshot at the top five players on the all-time money list and a brief look at how they got there. Of course, we’ve got to add the caveat that with so many high buy-in events taking place throughout the calendar year, amounts won and place/spot on the list are constantly in flux.

In 2018, Bonomo had the best poker tournament run in history, having won upwards of $25 million! He had incredible string of final table finishes and wins all over the world, from the Bahamas to Malta to Hong Kong and Las Vegas. He won every major high roller poker tournament in 2018, including the Super High Roller Bowls in China and Las Vegas, as well as a second WSOP bracelet, in the $10K Heads Up Championship.

Already having accomplished the unthinkable, Bonomo went on to do the impossible, winning a third bracelet (second one in 2018) in the $1 million buy-in Big One for One Drop for a $10 million score.

There is big and then there is @JustinBonomo.
Wins Big One for @OneDrop for $10,000,000 and takes the top spot on poker’s all-time money list. 💧💰1⃣
▶ https://t.co/wtwTU6NmGw pic.twitter.com/abfFDN0rz2

Bonomo was already a stellar poker player with over $18 million in career wins prior to 2018, so his performances over the past couple years have vaulted him from the top 20 into second place overall. Quite the achievement indeed!

Kenney’s crowning moment, however, was notching the largest-ever poker tournament score, $20.5 million for a second place finish (after he agreed to a chop with the event’s eventual winner while holding the chip lead) at the £1,050,000 No-Limit Hold’Em – Triton Million for Charity event in London.

While Kenney’s spot might arguably be “tainted” by the fact that he has almost exclusively played on the super high roller circuit — in events with buy-ins of $25K or more — over the last few years, so have dozens of others, and they don’t have the results he can boast. There’s no reason to believe Kenney will slow down anytime soon, so look for him to keep competing for the top spot on this list for a while.

Prior to Bonomo’s ridiculous 2018 run, and Kenney’s insane $20+ million runner-up Triton Poker event score, Kid Poker had earned more money playing live poker than anyone else. The Canadian poker hero has been grinding the poker tables for more than a couple decades now and he has amassed a fortune in live poker tournament earnings. A first-ballot Poker Hall of Famer, he continues working on his game to ensure that he can stay atop this list, as the competition gets ever tougher. To point, his most recent score was a massive $3.3 million payday for winning the 2022 Super High Roller Bowl.

Negreanu has also capitalized on his popularity in the poker world. A staple for years on all the top poker TV shows, Negreanu also pumps out plenty of content of his own for fans to enjoy on YouTube as well as his Full Contact Poker blog and podcast.

Far and away England’s top all-time poker tournament money winner (more than double the career total of Sam Trickett; a mindboggling stat on its own!), Stephen Chidwick continues his relentless climb up this list. Holder of a WSOP bracelet and with over a dozen(!) wins coming in events featuring buy-ins of $25,000 or more, Chidwick is an absolute beast on the super high roller circuit. This is his second-best overall year to date, with cashes totaling over $5 million and there’s no reason to believe his train will slow down anytime soon.

Congratulations to Stephen Chidwick on winning his first WSOP bracelet in the $25,000 PLO High Roller. He wins $1,618,417 after defeating a field of 278 players.https://t.co/bC6nTJzSRP pic.twitter.com/Di5s7q29XC

Seidel has been playing live poker actively for decades now. A winner of eight WSOP bracelets, he’s also a Poker Hall of Famer. Seidel continues not only to be active, but also to thrive in poker tournaments of all buy-in levels. To point, over two-thirds of his career tournament winnings have AFTER he was elected to the Poker Hall of Fame! A force to be reckoned with Erik continues to play in all the big High Roller events around the world and remains a threat to climb the all-time WSOP bracelet leaderboard as well.

Erik continues to pad his numbers and add to his career totals with millions in cashes over the last couple years.

The Rest of the Best

After scrolling through this list of the top five poker players on the all-time money list, you might be shaking your head in amazement that legends like Phil Ivey, Antonio Esfandiari, and Phil Hellmuth (who sits atop the career WSOP bracelet list) didn’t make the cut. Well, to be fair, both Phils and the Magician ARE still in the top 25. How to explain it though?

Simple: with the proliferation of High Roller events all around the world over the last few years, cashing for six- and seven-figure scores has become increasingly common. Guys like Hellmuth, Ivey, and John Juanda earned their stripes and built their career tournament winnings stats playing in events with FAR lower buy-ins, usually a maximum of $10,000; plus, there weren’t nearly as many such high buy-in events running in any given year. These days, yearly wins of $2-3 million are relatively common among those who play the High Roller circuit; a far “easier” achievement when some events cost $25K, $50K, $100K (and more!) just to enter, and they run throughout the year…

Lastly, let’s not forget that “amount won” does NOT take into account amounts bought in for, chops, staking agreements, and the like. We’ll likely never know the true amounts of PROFIT that poker players will have earned over their careers, but nonetheless it’s fun to talk about and enjoy all-time money lists like these.