Inside straight draws, or “gutshots” as they’re known among poker players, are probably some of the most misplayed draws in Texas Hold’em. While more experienced players usually know how to handle inside straight draws, those new to the game tend to overvalue them, which costs them a lot of money in the long run.

In this article, I will try to offer three useful tips for playing these draws, which should help you avoid some of the most common mistakes and make more money in the long run. These hands aren’t that hard to play at all as long as you approach them correctly. 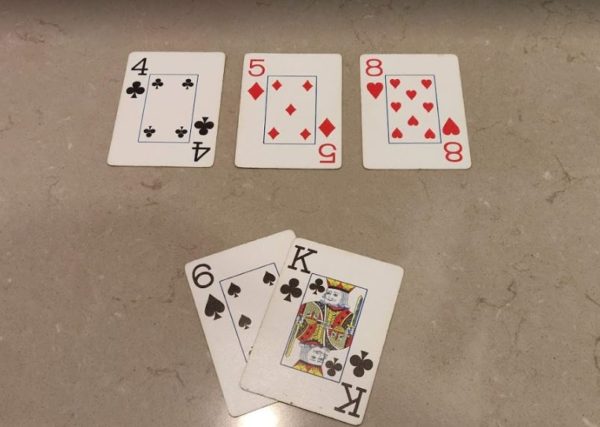 The first and the most important tip I can give you about inside straight draws is that you need to know the math behind them. With just four outs to make your hand, you’ll only have about 8% chance to improve by the turn and about 16% to make it by the river (provided you get to see both cards).

Without going into detailed math here, it should be quite clear that 8% isn’t a lot. In other words, when you call a flop bet to try to catch your gutshot, you’ll end up missing 92% of the time.

So, unless you’re facing a very small bet or have a backup plan, relying on the strength of your draw alone usually won’t be enough to warrant a call. I’m not trying to say you should never continue with your inside straight draws, but these hands are weak and need to be treated as such.

That being said, calling your opponent’s bet on the flop is fine because you are doing it not just to hit the draw. You can bluff later on even if unimproved, or your opponent could decide to give up and check on the turn and river where you can easily pick up the pot.

However, if you are up against multiple players or facing aggression on multiple streets, you should toss these hands into the muck without much thought. With some practice, it is not hard to distinguish profitable spots, and you can always train by playing, reading some articles, or taking a poker quiz.

2. Distinguish good draws from bad ones

If and when you decide to chase an inside straight draw, you should usually make sure you have a good, clean draw. What I mean by this is that you want to be drawing to the nuts or at least the virtual nuts.

For instance, calling bets to make the lower end of a gutshot straight is rarely a good idea. A bulk of your equity in these scenarios will come from bumping up the action when you get there and that’s very hard to do when there are better hands your opponents could make even if you hit your “gin” card.

For example, if you have 54 on a 782 board, the 6 can give you a straight, but your opponent with T9 could have you drawing dead and hitting that 6 would cost you a lot of money.

A similar idea applies to boards containing a flush draw in addition to your gutshot. In these scenarios, the number of your clean outs is essentially reduced to three as your opponents could have a variety of flush draws on the flop.

So, to summarize, you should stick to playing good draws and avoid the other draws as much as possible. With your odds of making the hand being poor to begin with and with all the reverse implied odds when you make your hand and end up losing, it’s just not worth calling even a single bet most of the time.

3. Stay extra careful when out of position

When you’re in position and driving the action, inside straight draws are easier to play. You’ll have the benefit of seeing what your opponent does and often win the pot without having to make your hand by simply betting. Out of position, however, gutshot draws are much harder to play.

You’ll usually have to pretty much rely on the strength of your draw alone and, as explained earlier, that’s nothing to get excited about. Unless you have a good reason to believe your opponent is going to fold more often than he should against your c-bet, checking is probably a better option.

As a general rule of thumb, you can check-call once with a naked gutshot straight draw. If you don’t pick up any additional equity on the turn, you should be done with the hand unless your opponent makes a super small bet that gives you the right odds to call.

Every now and then, you can try to check-raise with these draws as well, but I would only suggest doing it if you have some backdoor equity you can pick up on the turn. For this play to work, though, make sure stacks are deep enough so that your opponent has enough room to fold, and you could be barreling on other streets as well.