Talk about a title that creates controversy! Especially if you’re a poker dealer yourself and came across this headline, you might think that we here at Cardplayer Lifestyle are a bunch of ungrateful, stingy lowlifes. Before you come to the wrong conclusions, however, keep in mind that we also published a list of the Top 10 Reasons for Tipping Poker Dealers. Indeed, tipping dealers is so common in live poker play that many players simply wouldn’t even consider not tipping. 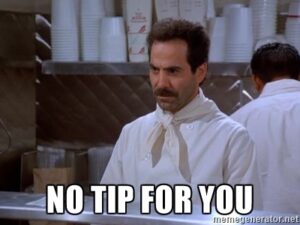 Nonetheless, we’ve compiled a solid list of 10 reasons why it would be justified to keep your money and not tip.

If the pace of your game is insufferably slow, if the dealer is making frequent procedural errors that prevent the game from flowing, or if the floor needs to be called often to make rulings, these are all signs of an unprofessional poker dealer.

2. They Have a Bad or Sour Attitude

Yes, we know you’re working, but would it be so difficult to crack a smile once in a while?

3. They Made a Mistake that Cost you a Pot You Were Supposed to Win

If your dealer accidentally mucked your card or created a misdeal when you were the favorite to win the hand (here’s a famous example), we can understand why you probably wouldn’t want to give them any of your money.

If your dealer has made negative comments about your style of play or “how lucky you’ve been” to win hands, why tip them? If they can’t appreciate it, they shouldn’t be privileged to share in your good fortune.

5. They Call the Clock on You

I know this sounds crazy but I’ve seen this a couple times with my own eyes. The dealer is sitting at the table solely in order to be the game’s facilitator. In other words, only players should be able to call the clock on you (to make a decision). If you ask me, a dealer calling the clock on a player without being prompted should be singled out for disciplinary action, not a tip.

Yesterday a dealer called the clock on me in a big hand.
“Welcome to WSOP”

Check out our exclusive interview with top WSOP dealer, Shaun “the Dealer” Harris

If you’ve tipped your poker dealer but they don’t say thank you, be sure that’s the last dollar of yours they’ll see.

7. Too Much Tipping Hurts Your Bottom Line

Tips can add up to a lot of money over time, and we know that it’s hard enough just to “beat the rake” consistently and turn a profit at a casino. Especially if you’re a grinder and play dozens of hours of poker each week, not tipping every time you win a hand is understandable. Perhaps once per dealer shift is more reasonable.

You think we’re joking? This actually happened. If you’re not the kind of person to tip a waitress, then why tip a poker dealer? (Shame on you by the way!)

Ed. Note: This incident was subsequently proven to be a hoax; but the point stands.

9. You’re Playing in a Tournament and Don’t Cash

Each hand of cash game action at a poker table can be thought of as an isolated event. A tournament poker player, however, will usually see dozens of hands just for posting the buy-in one time. If you end up busting without making the money, know that part of the buy-in includes a portion to toke the dealers. If you win a tournament or make a big score, however, it couldn’t hurt to spread your newfound wealth just a little among the dealers. 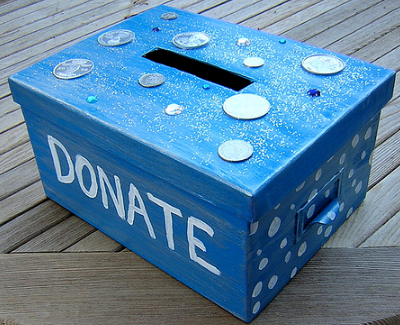 10. You Know of Others Who Need the Money More

As mentioned earlier, tips can add up over time. A typical session might see you give $10–$20 in tips to your poker dealers. While they’ll probably be appreciative, think of the good your $10–$20 could’ve done if it was donated to charity instead.

This rationale is all the more applicable to players lucky enough to be a part of a bad beat jackpot. Many players we’ve polled had said they’d give dealers “the standard 3%” if they won progressive jackpot money at the poker table. Think about that for a minute. You’d score a 5- or 6-figure payday and you’d give a dealer a tip ranging from $1,000–$3,000?

Think about how long it regularly takes you personally to make $1,000–$3,000 or win that money grinding at poker. Talk about getting carried away!

If you’re hell-bent on giving away that much money, we at Cardplayer Lifestyle humbly suggest that you tip the dealer a couple hundred and donate the rest to charity. Dealers do indeed work hard and don’t get paid much, but at least they have jobs and are capable of supporting themselves. There are plenty of unfortunate people out there for whom your generosity would in all likelihood do a lot more good.

We contend that even the poker dealers themselves, though they might be disappointed, wouldn’t be able to argue with that kind of rationale.

Can you think of another good reason for not tipping dealers at the poker table? Do you think any of our top 10 reasons are unjustified? Sound off in the comments section below or on our Facebook page!

Robbie I had something to share, but after seeing how you choose to ridicule and berate readers who went out of their way to leave a comment and add traffic to this poorly composed article, I will not share my thoughts on this piece, read your counterpart article, nor any other articles that you pen. IMO, your words ooze an inordinate amount of immaturity, and I don’t respect your retorts, especially since you claim to incite this type of controversial response from your readers. You stoop below the level of readers who comment negatively, as if it’s some type of measuring contest, with an unrivaled, disdainful approach. I do not support. Good luck to you.

I play a lot of poker in the south east normally in the 2/5 range of games with a tourny tossed in here and there. I follow one tipping practice, I tip the dealer 1-2% of my winnings that they dealt during their half hour shift at my table. I tip as they get up to move to their next table when I know the dollar amount. To be honest I have little idea how much a dealer make per hour when tips are part of the total. That being said I would say there are 12- 15 hands dealt in a half hour on average. If there was a single buck toked each hand that is over $20 per hour just in tips and I’m thinking thats on the low side of what I normally see. Not lokking to start a fight but just my thoughts.

Thanks for reading the article and for sharing your experiences, William.