Back in March, a lawsuit was filed alleging that Hollywood actor Tobey Maguire won upwards of $300,000 from Beverly Hills resident Bradley Ruderman in illegally held poker games about 3–4 years ago. The games also featured other actors like Gabe Kaplan and Nick Cassavetes and were held at a variety of upscale locales, including the Beverly Hills Hotel, Peninsula Hotel, and LA’s Four Seasons Hotel. To make a very long story short, Ruderman got into lots of trouble with the U.S. government for running a 7-year-long Ponzi scheme, and is now serving a 10-year sentence in prison. 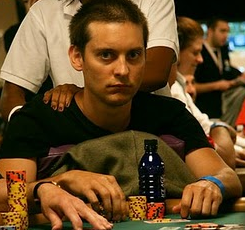 A bankruptcy trustee is now trying to reclaim money owed by Ruderman in any way possible, and has gone after Maguire, among others, laying claim to the money which, strictly speaking, was illegally won. It should be noted that Kaplan already reached a settlement with the trustee in August, agreeing to pay $27,000 of the $62,000 he won playing poker in those games. In fact, of the 22 people being pursued by the bankruptcy trustee, 14 have settled out of court. Maguire finally agreed to a settlement of his own, which will see him pay $80,000 to Ruderman’s estate. The terms of the settlement are still officially pending a judge’s ruling on December 21st.

Interestingly, while the gambling that took place in those poker games was illegal, the crime is officially just a misdemeanor in the state of California. Nonetheless, an A-list personality like Maguire can’t afford the bad publicity of getting “caught in a web” of court appearances or have the slightest silky thread of illegality tainting his squeaky-clean résumé and persona. Naturally, part of the settlement includes a clause that Maguire committed no wrongdoing willingly and was completely unaware that the money he won was obtained via Ruderman’s illegal financial transactions.