Home POKER The Rise and Rise of Televised Poker
POKER

The Rise and Rise of Televised Poker

There was a time, about 20 years ago, when nobody would have ever thought of watching poker on TV. What was the appeal? Cards would be face down and players would be quietly playing, deep in thought. So how did we go from that situation to one nowadays when poker has become one of the most watched mind sports on TV?

The idea of hole cards being shown live was almost an unwritten rule of “don’ts” when it came to professional poker players and recreationals alike. Poker had trickled in slowly onto TV but made a huge splash with ESPN’s WSOP Main Event coverage at Binion’s Horseshoe that coincided with Chris Moneymaker’s dramatic rags to riches win in 2003. Moneymaker turned an $86 satellite (a qualifying tournament that gives you seat in a bigger buy-in tournament) into a $2.5 million payday. This in turn was coined as the Moneymaker Effect and thus a Poker Boom was born. His win marked a pivotal moment in poker history that changed the landscape of the industry forever. Synonymous with WSOP Main Event coverage are Norman Chad and Lon McEachern. These commentators brought the game to life with their quirky commentary and dynamic chemistry on screen and behind the mic. 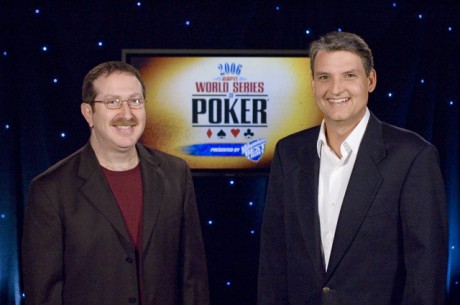 As the years passed, professional poker players became household names, giving them somewhat of a celebrity status. The 2000s brought newfound fame to players such as Daniel Negreanu, Phil Hellmuth, Tom Dwan, Phil Ivey, Gus Hansen, Barry Greenstein and of course, Doyle Brunson, to name a few. Gone were the days of thinking about poker in some dodgy underground smoke filled rooms. Being a poker pro became looked upon in a new light and the stigma around it was further reduced by how cool it was to be one. These high-stakes players became idols to millions around the world, and signing autographs became a part of their day-to-day routine while playing at the World Series of Poker in Las Vegas as fans wanting photos with their favorite poker pro had become the norm. Moreover, playing poker and other gambling games online at sites like blueprint casino also soared in popularity.

The aforementioned broadcast being replayed endless times on TV screens worldwide led to an influx of new events being created around the globe. For instance, the WSOPE (World Series Of Poker Europe) was brought to life in 2007, marking the first time that a bracelet was awarded outside of Las Vegas. It allowed players who were aged below 21, which is the legal age to enter casinos in Las Vegas, and indeed the inaugural WSOPE Main Event in London was won by the then-18-year-old Norwegian phenom Annette Obrestad who took down her first ever tournament for £1 million.

It wasn’t just the WSOP Main Events that reached stratospheric popularity. World Poker Tour (WPT) tournaments, commentated by Vince Van Patten and the late Mike Sexton, as well as huge cash games like Poker After Dark and High Stakes Poker debuted to tremendous fanfare and have maintained their loyal fan bases. Recently, the latter two shows were purchased and brought back to life after a long hiatus by PokerGO, a first of its kind channel solely dedicated to poker. Events in Australia, Asia, the Bahamas and numerous stops in Europe were also added to the annual poker calendar. Poker pros habitually began to spend weeks away from their homes in search of glory and big paydays alike.

It wasn’t just pros on TV screens either! PokerStars ran The Big Game for two seasons, which featured the novel concept of giving an amateur player a stack of $100,000 to battle it out against 5 top pros. Any profit gained from their starting stack would be kept by the ‘Loose Cannon’ and subsequently given to the player as a prize for surviving with the poker sharks.

Upping the Ante and Production Level

With poker fans clamoring for ever increasing amounts of poker content to be broadcast, additional concepts and tournaments debuted, most notably the Big One for One Drop, which featured a $1 million dollar buy in – something that seemed inconceivable just a few years beforehand. The existence of that tournament allowed the best players in the world and wealthy amateurs alike to compete for the highest of stakes against one another. While the poker pros would typically sell action among themselves, while the businessmen would be able to afford a $1 million buy-in without much hesitation. It’s an unparalleled atmosphere, to be sure.

As the years progressed, so too did the technology at the tables. Whereas coverage from 2000-2012 usually consisted of just highlights of the biggest hands and all-in situations via edited shows, that changed when ESPN began to broadcast cards up coverage on a 30-minute delay. This allowed a ‘Live’ in-play analysis delivered by guest commentators such as Antonio Esfandiari and Phil Laak, and more recently Nick Schulman and Maria Ho, giving fans a first-time peek at how the top pros dissect hands as they are being played in the moment.

Unfortunately major live poker events have been paused momentarily due to the coronavirus, and with the online poker streets currently dominating the industry (people are already prepping for the 2021 WSOP Online Summer Series), there is a hunger and desire for the live game to be brought back to our TV screens, as soon as it is safe to do so.