Sunglasses at the Poker Table

The issue of wearing sunglasses at the poker table has long been one of the hottest topics in the poker world. Just how hot is this poker topic? Well aside from being all the rage on 2+2 and the other big poker forums online, two poker bloggers far more well-known that me, have deemed it worthy enough to weigh in with their thoughts publicly – Roy Winston and Daniel Negreanu.

While everyone has heard of Negreanu, many of you may not know who Roy Winston is. Winston is best known as a big cash game player, who mostly frequents the Borgata in Atlantic City; he’s also had some relatively mild tournament successes.

Anyhow, Negreanu is decidedly against sunglasses at the poker table, while Winston (perhaps just to pick an argument with Negreanu and garner more attention to his blog from the poker community?) comes out in favor.

Daniel Negreanu’s 3 main reasons for thinking sunglasses should be banned are:

Roy Winston agrees with Negreanu that it takes away from an opponent’s being able to read you at the poker table, and adds that it gives a poker player the added ability to watch his opponents without them knowing they’re “being watched”. Winston, however, is particularly critical of Negreanu’s thought that sunglasses at the poker table are “cheating”, and is of the opinion that in a game where the object is to win and make money, you should use every possible advantage you can get.

Understandably then, the sunglasses at the poker table debate is something that will probably remain a hot topic for a while, especially if certain new rules come into being at big tournaments in casinos around the country. 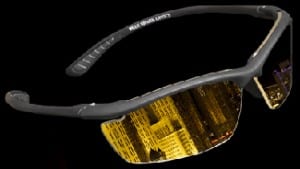 A few years back, I read and reviewed a book called “Dirty Poker”, written by a professional casino cheat named Richard Marcus. Among the cheating methods the author mentions in the book were “special” sunglasses he saw a player wear to a poker table that enabled them to see if particular cards like Aces, Kings, etc. were marked using a special, invisible, substance.

So I know for a fact that, indeed, it is possible to use “poker sunglasses” to cheat, or at the very least, have the advantages that Roy Winston mentions. When I first started playing poker regularly, about eight years ago, I also wore sunglasses to the table – admittedly, to “look like the guys on TV”. After a while, however, I stopped wearing them, feeling as though the advantages it gave me weren’t profitable enough to warrant wearing them. In principle, I agree with Winston that every poker player should make the most of whatever advantage he can get at the poker table, but I also agree with Negreanu that no player should have an UNFAIR advantage over any other player.

What’s far more important in poker is to possess the skillset and master the poker statistics, like pot odds, in order to succeed against your opponents.

I guess that brings me to my bottom line: It’s not like you, or me, or most of the 50 million+ poker players out there in the world are going to be playing in any televised poker tournaments any time soon… For the casual poker player playing in their home game, or in casinos once in a while, wearing sunglasses or not simply should be THAT big of an issue to you or your opponents to begin with.

Anyhow, considering that Negreanu and Winston’s recent blog postings have generated far more feedback than usual, maybe some of you poker fans out there want to share your thoughts about this blog post and my opinion?