There’s nothing like a fun-filled Labor Day weekend to put you in good spirits, right? 🙂 One person who is certainly in a good mood right now is former NBA star Shawn Marion, after he notched a big score at Oklahoma’s WinStar Casino during their River Poker Series. 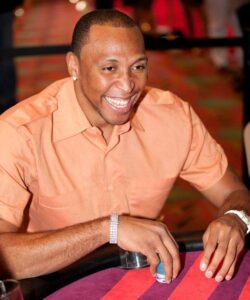 Though we called the WinStar poker room for confirmation, they were unable at this time to release details of precisely which tournament Marion played in, how many total players entered, prize pool information, or Marion’s winnings. Based on the River Poker Series schedule, however, we’ll take an educated guess that it was Event #8, $1,000+$100 Turbo Bounty Re-Entry. What is certain, however, is that Marion finished in fourth place in the first tournament he’s entered in two years.

Over his 16-year NBA career, Marion played for the Phoenix Suns, Cleveland Cavaliers, Dallas Mavericks, Miami Heat, and Canada‘s Toronto Raptors. He was perhaps best known for being incredibly versatile on the court, and finished his career with an NBA championship (2011) and an Olympic gold medal (2004).

Away from the courts, Marion has been a longtime poker enthusiast, having played at numerous charity poker events over the years as well as at the World Series of Poker.

Back in 2011, Marion gave an interview to the Las Vegas Sun in which he stated “I love playing poker… I might turn pro when I get done playing ball. You never know.” A former UNLV Runnin’ Rebel, Marion sure knows what Vegas-style action is all about, so it’s no surprise that he followed through on his words and has started making more frequent appearances at the poker felt.

While the following is speculation, it’s possible that Marion decided to attend the WinStar River Poker Series upon the encouragement of Maria Ho, the poker room’s ambassador. The two recently took a trip together to Israel – under the auspices of the Omri Casspi Foundation – along with a number of other celebrities. While on the plane, they engaged in a fun little cash game – see below, with Marion sporting the gold headphones:

There’s always time for a lil’ poker but I don’t sleep on @Amareisreal, @matrix31, and @TraciSzy ‘cuz they got game. pic.twitter.com/Fe4Z4uH6Xl

It’s perhaps no accident, then, that Maria was rooting him on from the rail during the event:

Marion took to Instagram to give his fans and followers additional details of his successful day at the tables. He spoke like a true poker player, giving details of his bustout, losing to his opponent’s pocket kings after about 9 hours of play. At a couple points during the tournament he held the chip lead, but his stack fluctuated a good deal over the course of the event.

The poker world is always happy to get some crossover exposure into the mainstream, and Marion has sure provided some of that via social media over the last 24 hours. Here’s hoping that he continues to enjoy the game and show up to more high-profile events.