This is an exclusive excerpt from Endgame Poker Strategy: The ICM Book by Dara O’Kearney and Barry Carter. It is the first book to cover the topic of ICM (poker’s Independent Chip Model) and includes everything from the bubble, final tables, game selection, postflop, staking, final table deals and much more. 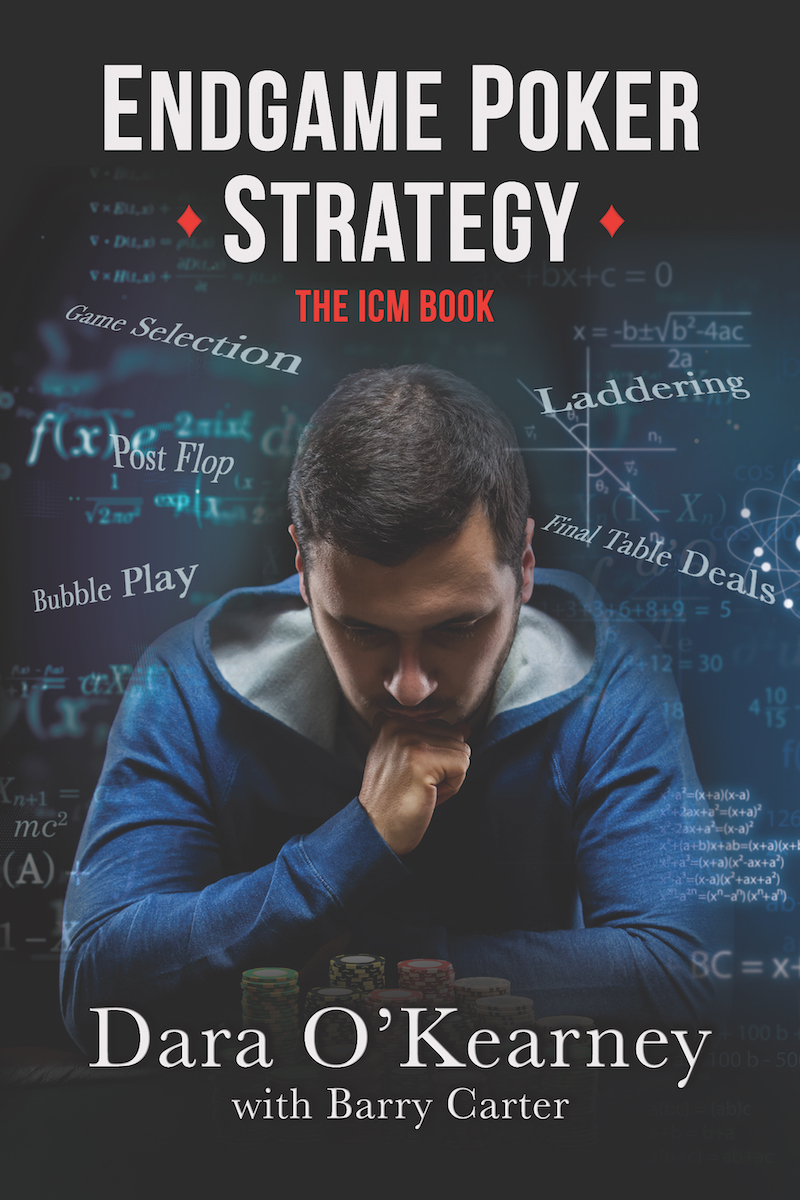 We deal to take variance out of the equation. We have all been in situations where we have a big chip lead with five players left only to take two coolers in quick succession and bust out in 5th. When you find yourself at the bigger final tables in your career, the ones that don’t come along all that often, you deal to lock up a big cash and not leave it to the poker gods. If the deal is a good one, of course.

In our example Player 1 will win 32.3% of the time and come 2nd 27.4% of the time according to ICM and assuming all players have equal skill. 59.7% of the time they will win a prize greater than the $305.80 they would get in an ICM deal, but 40.3% of the time they would get less. 4.9% of the time the chip leader ends up exiting in 5th, which is one time in 20. You have probably been in enough 60/40s at the tables to know how cruel variance can be in these spots. Remember you are playing a different tournament for a lot more equity at the final table and the big ones come up rarely. Dealing is a way of ensuring variance doesn’t hit you when it matters the most. Just to illustrate how easily fortunes can flip around, this is what the finish distribution would be at the example final table above (you can do these calculations yourself at www.primedope.com):

It’s worth noting while you look at these distributions that the chance of each player winning the whole tournament is their exact percentage of the remaining chips in play, which is how ICM works out the overall winner distributions. The chances of each player coming in all the other positions is much more complicated. If Player 1 doubles their stack they now have a 64.6% chance of winning the whole tournament, but their equity does not double: in fact it won’t increase much at all because of the chipleader’s punishment factor.

I like to deal when the final table is paying out large amounts, relatively. If 1st place pays $20,000 and I can lock up $15,000 without variance coming into the equation, I will. Paradoxically I usually also deal at the smallest final tables I make where the payouts are relatively small. If my equity (factoring in my edge) at a small final table is $500 and somebody offers me ICM of say $450 I’ll snap their hand off. This is not to even out variance but because I value the time I save. If I can end a small stakes final table taking a small equity hit and save potentially three hours, I’ll do it. If it’s a small side event at a live festival I’m even more keen if it means I can get back to my hotel room to have an early night.

Any time is the time to discuss a deal. There was a famous case with Dan Harrington at the WSOP final table where he offered everyone a deal after every single elimination at the final table. It made sense, he argued very rationally that this was the most equity they all would ever play for. It makes a massive difference when you have a sample size of one, he did what I said, he recognised it was a new tournament. They were no longer in a $10,000 tournament – it was more like a $200,000 tournament. He was an investment advisor and he even sweetened the deal by offering everyone free investment advice. He got turned down every time.

Once the money becomes significant to you from a variance point of view, that is when a deal should be entertained. Online players usually understand this a lot better than live players because they play more volume and in more tournaments with huge fields. They know that how they do in their biggest final tables will make a massive difference to their year.

Other than variance, the utility of the money is another reason to make a deal. If you are a recreational player and the deal money would secure you a bucket list item like a new car, a holiday, a deposit on a house etc, then there is no shame in dealing.

If you are a serious player then taking a deal might secure you a new bankroll to play in bigger games. Let’s say you play a major tournament where you have $7,000 locked up, 1st gets $30,000, your equity is $20,000 and somebody offers you $16,000. That might be a bad deal on the face of it but if $16,000 means you can comfortably move up in stakes and play more lucrative games, it absolutely could be worth it. That makes much more sense than maximising your equity.

Having a backer is a huge factor in deals. Backers can make their players play on even if they want to deal. In fact many poker deals are made between sets of backers not the actual players. If you are in a live tournament and about to make a deal, it is very useful to know if the other players have backers. It can also be useful to have one (or pretend you have one). Players who turn down deals are often seen as instant villains, something I learned the hard way in my first year on the circuit. With six left on my second ever final table, I rejected a deal as the short stack that would have given me little or nothing over what I was already guaranteed, and well below my ICM. The problem I quickly found was that I was now cast as the villain of the piece, and the other five players set as their prime objective to get the naysayer out so they could agree to the chop. After an hour of battling one against five I did indeed bust in sixth, prompting my brother who was railing to ask if I regretted not taking the deal. I assured him I did not. In poker you submit to the short term vagaries of luck and randomness in the knowledge that so long as you keep making the right decisions, you will profit in the long term. Conversely, agreeing to bad deals can only cost you in the long term, and I would have felt ashamed of myself if I had done it.

I did, however, learn one important lesson that day. While you never want to agree to a bad deal to avoid making the others see you as the bad guy, you also don’t want to be seen as the only obstacle to a deal. It was clear the most experienced player of the six also saw that it was a bad deal for everyone but the chipleader (who was getting first place prize money), but he kept quiet in the talks allowing me to assume the bad guy role.

If you are rich there is no reason to do a deal to even out the variance or for utility reasons. From a game theory perspective it puts you in a very desirable position where you can negotiate better than ICM deals and also put pressure on your opponents at the table.

A lot of deal mistakes come down to what I call inaccurate anchoring. An anchoring bias is when a person is fixated on a particular reference point or ‘anchor’. They might, for example, fixate on the price they paid for their house when considering how much to sell it for. In final table deals the players anchor to either what their current position would get them or a particular amount they had hoped to lock up.

In a live tournament it is a good idea to engage the rest of the table in conversation before any deal is struck to get an idea of each player’s incentives. You can pick up a lot of information which can inform how to get the most out of a deal. First and foremost you’ll learn if your tablemates understand ICM, if so then you can forget proposing a favourable chip/chop deal. You will learn who the professionals are and who is unlikely to accept a deal where they thought they were being disrespected. You will also find out what the money means to each player and if they have anchored onto a particular payout they won’t budge from.

In live poker people do not understand ICM as much, which is why they often scoff at ICM deals or can be tricked into taking a bad deal. It is very common for inexperienced players to get pressured into a bad deal, often simply by the social pressure of not wanting to be a pariah for the rest of the tournament. This happens a lot in local tournaments where the players know each other and go on to talk about you behind your back if you don’t deal.

The question is, do you care about money or the admonishment of strangers? If you are playing in a major tournament then taking a bad deal because of social pressure is a huge mistake. These spots simply do not come up often enough to justify people-pleasing, so unless you genuinely worry for your safety (which is a real concern in some card rooms) don’t take a bad deal. Having said that, if the card room is a regular haunt then you could give a little bit of leeway to the locals if you want to have a cordial future playing environment. In particular if the prizes are quite low for you it might be helpful to do a less than perfect deal now so you can remind the regulars of your generosity if you ever find yourself at a bigger final table with the same players.

One way of avoiding social pressure entirely is to simply tell your table that you have a backer that you have to run things by first. I often would walk over to my Chip Race co-host David Lappin and ask him to shake his head looking angry to infer that I tried my best but my backer said no. I do this too when trying to negotiate a better than ICM deal for myself based on my skill edge without wanting to overtly tell the rest of the table I think I am better than them. It is much easier to make somebody not at the table the villain rather than create an awkward playing environment.

Click here to purchase your copy of Endgame Poker Strategy: The ICM Book