Most of us are recreational poker players. We play the game for intellectual challenge, excitement, and social interaction. But poker is more than a hobby. Our goal is to win as much money as possible – and lose much less. That’s why most of us generally stick to low/middle limit hold ’em games.

However, we play in casinos like https://www.mystino.com/ja/games/all/ and cardrooms where there is a significant cost-to-play to overcome. The casino rake, the drop for the Bad Beat or Aces Cracked Jackpot, and tips to the dealer can add up to about $25 per hour. Play for six hours and the cost often spirals to $150 for the session. Most recreational players are satisfied to go home $100 ahead. 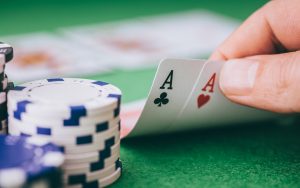 The most important decision a hold’em player must make is whether to stay to see the flop using the hole cards dealt to him. The best starting hand, of course, is pocket Aces. In the long term, expect it about once every 221 hands dealt. Experienced players usually know which hole cards are worth the investment, or they use available charts, or the Hold’em Algorithm to make that decision.

In addition to the value of their hole cards, other factors in this decision are betting position, whether there has been a raise, how many opponents are already in the pot, their playing traits (tight or loose, passive or aggressive, deceptive, chasers, or calling-stations), and the texture of the game. Over the long run, a player would be playing recklessly if he paid to see the flop more than one out of five hands dealt.

Want to go home a winner?

(1) Avoid the losers – Don’t chase; look for opponents’ tells and know their traits; count your outs (the cards that will make your hand) and compare your card odds to the pot odds.

Rule: After the flop, the pot odds must be higher than your card odds to warrant further investment.

(2) Build the size of the pots you win as much as possible – a skill that most recreational players are lacking. Become skilled in bluffing and other deceptive tactics. (I estimate that the break-even for bluffing is when your bluff is successful about 30 percent of the time.)

There is one strategy that recreational players rarely use:

Build the pot before the flop by clever raising. It takes know-how and courage and is rare in low/middle limit games. Each player is dealt two down-cards and must decide whether to stay in the pot. The betting starts with the players to the left of the two blinds and then progresses clockwise to the blinds. The under-the-gun (UTG) and next position (UTG+1) are at a big disadvantage: They must act (fold, bet or raise) before the other players, so the later positions have a real edge over them.

Seated in a middle or late position, if you hold a strong hand – even a mediocre one with good drawing potential – raise it up. Your opponents behind you are now faced with a two-bet, and some are likely to fold. You have reduced the competition, so your chances of winning are much greater.

If your hand improves on the flop giving you seven or more outs, and it’s checked to you, make the opening bet. It’s a semi-bluff. Should you make your hand on the river, bet for value – hoping for callers. If a scare card falls on the river, look for tells and try to read your opponent’s hand; consider his playing traits. You may want to semi-bluff.