Preparing for Life at the World Series of Poker

How would you like to spend 6–7 weeks in Las Vegas for the World Series of Poker (WSOP)? I admit, there are worse places to be in the world, but as each year passes, the whole thing loses a little bit of sparkle for me, and in poker writing parlance, I am a mere pup. 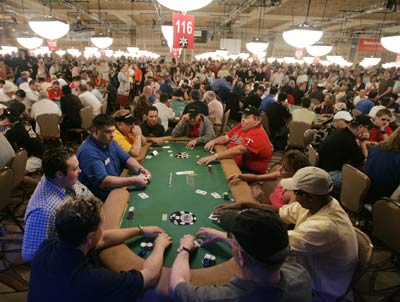 The first year I worked for PokerNews. Man that was tough. I originally planned to work a four-on-four-off system, with a mixture of playing and working making the whole experience that much better for me.

Unfortunately, I got hammered on the tables, quickly ran out of money, and had to shift the balance to work more play less. If I had 10p for every professional poker player who told me that I could make money playing $1/2 NLHE at Planet Hollywood, then I could afford an Oprah Winfrey Chai Tea Latte.

It doesn’t work like that. There’s this thing called variance and, if it turns up when you sit down at the table, it kicks your arse. I don’t have time to beat it. Instead, it beats the crap out of me.

After that first year I swore that I would never cover the WSOP as a live reporter. It is an unforgiving role. I’d rather sit at home and look for Welcome Bonus to utilize whilst playing games at an online casino. There is nowhere to hide. I hated it and I haven’t done it since. I tip my hat off to the lads who get stuck in – year in year out. Sadistic bastards every single one of them.

The second year I worked for Party Poker. On the face of it I had a cracking gig. I was being paid good money, was handed a suite at the Palazzo and told to cover the Party Poker qualifiers in the Main Event.

It was even more complicated than the PokerNews gig.

The large percentage of the qualifiers were random people from a variety of different countries. The glare of the WSOP Main Event was too hot for most of them and they played like rabbits staring at the headlights.

Finding a story was like pulling blood from an anemic.

I guess I don’t love what I do as much as I should. I know that, and over time that will change, but for now I try to give 100% for my employers, and the same is true when I scour the halls of the Rio Las Vegas in search of a story that will put a smile on someone’s face.

It’s not just the work. If it was then there would be no problem.

The biggest problem is being away from the ones that you love for 6–7 weeks. This is why poker is a young man’s game. The WSOP can be a bastard for the family man.

Poker is Great, but It Cannot Fill a True Void

I have a 13-year old son who lives with my ex-wife. It’s a terrible thing to live apart from your children. To not be able to put them to bed at night, wake them up in the morning, watch them sleep, read them stories and just listen to their heart beating – the melody filling every nook and cranny of your home.

When it’s time to get on that big jet plane I have to force myself to board. I miss him so much. Fortunately, my wife works with me at the WSOP. If I was to also leave her behind, like so many poker pros do, then it wouldn’t be worth it. I just wouldn’t board the plane.

Despite my moans, groans and complaints, I know on what side my bread is buttered. I live a quite wonderful life and am grateful for the opportunity to be able to complain about such nonsense.

The World Series of Poker is a part of my life, and it will continue to be so for a very long time. It’s the sort of experience that touches you and leaves you wanting more: like sex, drugs and Kimchi.

But it’s not as important as spending time with my little boy. Every second counts and time is a great teacher. I am learning about priorities the hard way, and each decision that I make that takes me further away from him leaves a tiny scar on my heart.

One day I will return and he will be sitting next to me as we are all told to shuffle up and deal. One day. But until then it can’t be that way. Until then the WSOP will always be hard, and I guess that’s okay with me.

Lee Davy spends his time helping people manage their problems with alcohol and his work can be found at www.needyhelper.com. In his spare time he writes about poker, and anything else people will pay him for.

Great article . I have three kids ages 14, 11 and 10. The first time I had to drop my kids off to my ex wife and her boyfriend tore my heart out.

Traveling and missing your kids are the hardest parts of being a professional poker player. I enjoyed your article, and I couldn’t agree with you more