PokerStars is in the midst of celebrating its 10th anniversary online, and it’s doing so in a big way! The largest online poker site in the world is staying true to its name, as it is planning on breaking the Guinness World Record for the biggest online poker tournament ever held this Sunday. PokerStars itself set the record back in 2009, when almost 150,000 players took part in a $1 buy-in tournament. Tens of thousands of players have already registered to take part in this Sunday’s World Record attempt, which features a $1 buy-in as well as a $250,000 guarantee. The high guarantee also means there will be an overlay if fewer than a quarter million people play in the tournament; i.e., good value! I have a hunch that, indeed, the record will be established, but the way PokerStars continues to grow, it may not stand for that long. 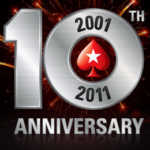 For those of you interested in participating and potentially taking down first place prize money of $50,000, the tournament is scheduled to begin at 12:30 EST. An extra bonus, many PokerStars sponsored pros will be taking part in the tournament and $10 bounties will be placed on their heads. 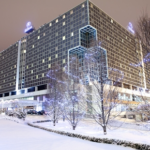 Celebrate with PokerStars Live in Prague

For any online poker players who happen to find themselves playing poker in Prague this weekend to play in the European Poker Tour (EPT) events, PokerStars is rolling out the red carpet for you! They’ll be renting out space in the Prague Hilton for online players to gather together with their laptops and play in the World Record attempt tournament. PokerStars will also be providing free drinks and light refreshments to anyone who shows up to play. Many PokerStars Team Pros are likely to make an appearance, as they’ll be in attendance for the EPT. Sounds like Prague is definitely the place to be this Sunday :-).