A few days ago (on the 6th May to be exact), after loading up the PokerStars client, I was very surprised to see that the buyins for my regular MTSNGs (multi-table sit-and-goes) had changed and my favorite game, the non-turbo $4.40 180-player Texas Hold’em tournament had disappeared altogether.

After a few quick searches in Google, I was able to find a page on the PokerStars website explaining the changes. Stars changed every aspect of their SNGs from the buyin levels to the blind structures to the rake structure. The aims of these changes were to make the buyin levels more uniform and to improve the overall structure of the games.

From reading the forums and popular poker blogs it seems that the community as a whole is unhappy with these changes. The biggest argument that the community has is the increase in the rake taken by the site for the low- and mid-level buyins. A good example of this is the removal of the popular $15+1 buy in level and the introduction of a $10+0.85 and a $20+1.7 level. This change now means that SNG grinders who were at the $16 level are now paying 7.83% rake instead of 6.25%. So essentially, this change now requires these players to have a higher ROI just so that they can beat the rake. Many players on the different forums have shown disgust towards these changes and don’t understand why Stars would want to make it tougher for low limit players to move up in stakes.

People in general don’t like change and are often against it as a result of being taken out of their comfort zone. My first impressions of these changes were very negative and I even considered moving over to a different online poker room. Since making the necessary adjustments to my game as a result of the structural changes, I have shown great results and currently see the changes that Stars made as a blessing in disguise. It might take some time but soon the community will start seeing the benefits of these changes and use them to exploit the inexperienced players.

For more information on the changes that Stars made to their SNGs, see the tables below (table was taken from https://www.atkinator.net/2011/05/epic-fail-by-pokerstars-sng-changes.html): 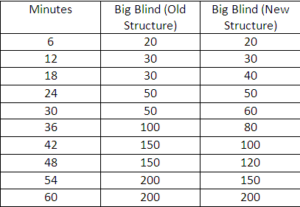 This is a guest post by Justin Butlion, an entrepreneur, poker player and web developer. He blogs at The Great Grind and can be found playing on PokerStars under the nickname hawkeye77787.