No Gamble, No Future is in full swing on PokerGO with September set to host the continuation of Season 1 episodes.

September will also see the return of the Poker Masters with the 12-event schedule having every final table air on PokerGO.com. 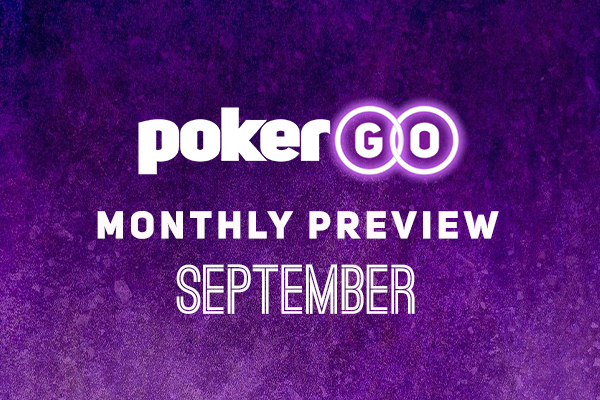 The last episode for the month will see the stakes reduced to $100/$200 No-Limit Hold’em that is headlined by Matt Berkey, Bob Bright, Nick Schulman, Jimmy D’Ambrosio, Jake Daniels, David Levy, and Justin Young. These players will carry the show through to October where a new lineup will be headlined by Lynne Ji, Eric Hicks, and Eli Elezra.

Each Poker Masters event plays down to the final table on Day 1 before concluding the following day on PokerGO.com at 4 p.m. ET / 1 p.m. PT. The PGT Live Reporting team will also be on-site to provide live updates throughout the entire 2022 Poker Masters.

What Did You Miss in August?

The highlight of August on PokerGO was the debut of No Gamble, No Future that began with four preview streams before the 21-episode season began.

Patrik Antonius, Eric Persson, Matt Hanks, Ryusuke Daifuku, Matthew Su, Dylan DeStefano, and Eric Hicks played $200/$400 No-Limit Hold’em with viewers being treated to two of the four episodes from this night of action. One of the major highlights from the first episode included this hand that involved Persson betting $62,000 on the river with nothing.