November on PokerGO will see the continuation of No Gamble, No Future along with the weekly Friday Night Hangouts with Boston Rob on the PokerGO YouTube channel. 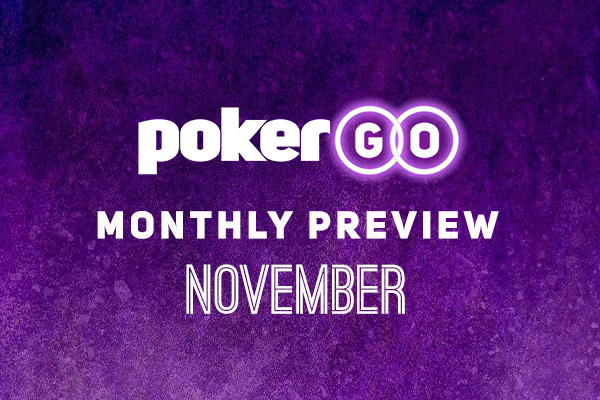 The first two episodes for November will be the final two episodes from this No Gamble, No Future lineup is headlined by Lynne Ji, Jake Daniels, Brett McCollum, David Levy, Nikolai Novak, Eric Hicks, and Eli Elezra playing $50/$100 No-Limit Hold’em. The action is wild as monster pots are played, and bad beats are delivered before a new lineup takes center stage.

The action will be reduced to $5/$10 No-Limit where a mix of Hollywood actors, entrepreneurs, and poker players that include Maria Ho, Kevin Pollak, Daryl Morey, Natalia Cigliuti, Chris Eubank Jr., and Simon Yu battle it out. No Gamble, No Future co-host Brent Hanks even joins in and plays a few hands before returning to commentating duty. This lineup will be featured for the final three episodes of November before the action will switch from cash games to a sit-n-go in December.

Join Boston Rob for his Friday Night Hangouts on the PokerGO YouTube Channel.

Every week, you’ll have the chance to hangout, ask questions, and play poker with the Survivor all-star Boston Rob Mariano. Rob plays poker with fans on the PokerGO Hold’em App and answers questions from his fans every Friday.

Rob also has special guests join the show such as Tyson Apostle and Josh Arieh where they talk about topics such as Survivor and poker strategy, review their previous poker events, and even watch old Survivor audition tapes! Every week is a new adventure, and Boston Rob’s Friday Night Hangouts are a great way to get to know one of your favorite TV personalities.

What Did You Miss in October?

The month of October on PokerGO would see the conclusion of the 2022 Poker Masters and Super High Roller Bowl VII.

Jason Koon would win the $50k finale of the Poker Masters for $666,000, but it would be Sean Winter being crowned the Poker Masters Purple Jacket winner. Super High Roller Bowl VII would attract 24 entrants and Daniel Negreanu would be crowned champion. Negreanu defeated Nick Petrangelo heads-up to win the $3,312,000 first-place prize – the biggest victory of his career.

The StormX Invitational returned for its second running of 2022 and included a mix of crypto entrepreneurs, celebrities, and professional poker players. The likes of Daniel Negreanu, Doug Polk, Kitty Kuo, David Williams, Joseph Cheong, Bruce Buffer, and Arden Cho were all part of the 130-entrant field as Richard Lee emerged victorious to win the $175,500 first-place prize.