It will be a quiet month of May on PokerGO which will be needed prior to two months of continuous WSOP action from Bally’s / Paris on the Las Vegas Strip.

Season 9 of High Stakes Poker will conclude during the month, while Round 4 of High Stakes Duel III is scheduled to feature the return of Phil Hellmuth and Tom Dwan for an unprecedented $800,000 match. 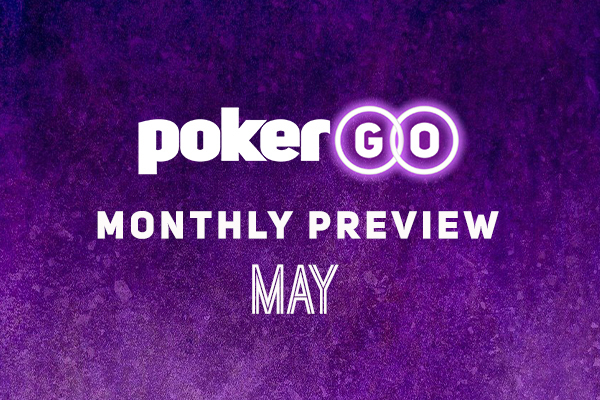 The highly anticipated Season 9 of High Stakes Poker concludes in May with the final few episodes set to top off a great season that included the return of poker legends, new players making their debuts, and some massive six-figure pots.

There will be two more episodes with this line-up playing $500/$1,000 No-Limit Hold’em, before the fifth and final line-up takes a seat for the final two episodes of the season. Daniel Negreanu and Doyle Brunson will return to take a seat alongside Dwan, Ivey, Antonius, and Tang. Jason Koon will make his season debut, while Jonathan Gibbs will return following his debut in episodes two and three of the season.

High Stakes Duel III is returning this month with Phil Hellmuth back in the winner’s chair following his Round 3 victory over Tom Dwan. Both players will be making High Stakes Duel history with Round 4 and a $800,000 prize pool being reached for the first time.

Hellmuth’s seven-match win streak was ruined by Dwan in Round 2, but The Poker Brat righted the ship that has seen him collect eight High Stakes Duel victories against Daniel Negreanu, Antonio Esfandiari, Fox Sports 1’s Nick Wright, and now Dwan.

This Round 4 match will see an unprecedented $800,000 prize pool at stake, and regardless of the result, the duel’s rules stipulate that a Round 5 will be needed where there will be $1.6 million up for grabs. Following High Stakes Duel rules, both Hellmuth and Dwan will have to win two consecutive matches before they have the option to cash out.

What Did You Miss in April?

It was a busy April on PokerGO with the continuation of High Stakes Poker, Super High Roller Series Europe, and the inaugural PokerGO Tour (PGT) Heads-Up Showdown.

Season 9 of High Stakes Poker in April saw four action-packed episodes where the pots were big, and the table talk even grander. Jennifer Tilly, Garrett Adelstein, and Daniel Negreanu couldn’t stay out of the limelight as they were involved in some of the biggest pots of the season.