February on PokerGO saw the debut of Season 9 of High Stakes Poker along with the second running of the PokerGO Cup.

High Stakes Poker will continue in March, while the U.S. Poker Open returns with a 12-event schedule kicking off on March 16. 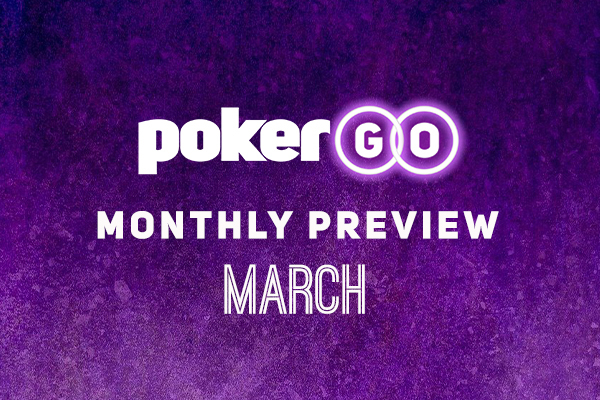 High Stakes Poker made its highly anticipated Season 9 premiere in February with the first two episodes airing exclusively on PokerGO.com.

Some of the game’s biggest names will take a seat throughout Season 9 of High Stakes Poker as the likes of Phil Ivey, Tom Dwan, Daniel Negreanu, Patrik Antonius, and Doyle Brunson headlined the first two episodes.

Heading into March’s episodes there will be one more episode from the current crew of players, but Episode 4 will see four players make their High Stakes Poker debut. Joining Dwan, Brunson, and Antonius, high-stakes cash game regular Garrett Adelstein leads the debutants that also include Xuan Liu, Krish Menon, and Jennifer Tilly. Kim Hultman also makes his return after debuting in Episode 1 as the eight players battle for three episodes of $200/$400 No-Limit Hold’em.

The U.S. Poker Open crowned David Peters as the second consecutive U.S. Poker Open Champion on the back of him winning three events. Peters will be back to see if he can three-peat when the 2022 U.S. Poker Open takes center stage at the PokerGO Studio at ARIA Resort & Casino from March 16-28, 2022.

There will be 12 events on the schedule include seven No-Limit Hold’em events, three Pot-Limit Omaha events, a Big Bet Mix, and an 8-Game. Buy-ins range from $10,000 up to the $50,000 finale, and for the player that earns the most PokerGO Tour points throughout the series, they will be crowned the 2022 U.S. Poker Open Champion and receive the Golden Eagle Trophy and a $50,000 championship bonus.

Others in the field are a mix of crypto entrepreneurs, investors, and celebrities including Paul Pierce, Bruce Buffer, Charlie Lee (creator of Litecoin), Amber Arbucci (Victoria’s Secret model), Landon Cassill (NASCAR driver), and many more.

The tournament will be a $5,000 rebuy with the final table getting paid with the entire tournament available to watch on PokerGO.com and the StormX YouTube channel.

Watch the StormX Invitational on March 3, at 6 p.m. ET.

What Did You Miss in February?

The debut of High Stakes Poker Season 9 dominated the poker news cycle in February as the show returned nearly a year following the conclusion of Season 8. The first two episodes saw Tom Dwan, James Bord, Phil Ivey, Daniel Negreanu, Jean-Robert Bellande, and Doyle Brunson all return to the iconic poker show while Kim Hultman and Jonathan Gibbs made their debuts.

February also saw the return of the Global Poker Awards, where 26 awards were handed out throughout the evening to celebrate the poker industry and some of the game’s greats.