The PokerGO action will ramp up in April with the continuation of Season 9 of High Stakes Poker along with the return to tournament action in North Cyprus. 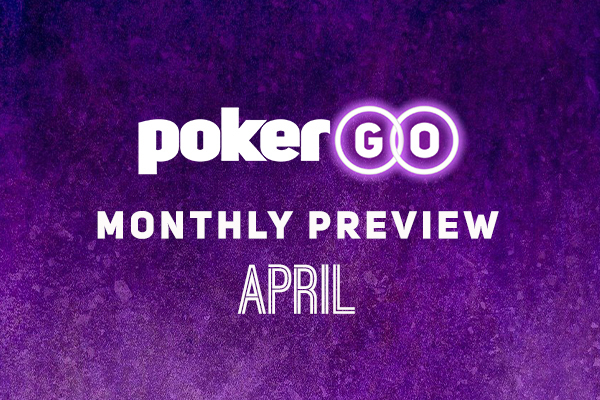 The highly anticipated Season 9 of High Stakes Poker continues in April as we approach the midway point of the season.

April will kick off the stakes being raised to $500/$1,000 and a new line-up of players for the next three episodes. Bryn Kenney makes his Season 9 debut, while Tom Dwan, Jean-Robert Bellande, Phil Ivey, Krish Menon, Jennifer Tilly, Garrett Adelstein, and Daniel Negreanu all return.

The final episode of the month will see a new line-up take a seat, and Stanley Tang and Eric Perrson will be making their High Stakes Poker debuts alongside Kenney, Dwan, Ivey, Adelstein, Menon, and Patrik Antonius.

Super High Roller Series Europe kicks off on April 7 following Triton Cyprus with nine events and buy-ins ranging from $25,000 to $100,000 and including No-Limit Hold’em, Pot-Limit Omaha, and Short Deck events. Excluding the final event, all events are set to play out over two days with most of the final tables airing on the PokerGO YouTube channel.

The marquee event of the series will begin on April 13 with the $250,000 buy-in single reentry Super High Roller Bowl Europe set to attract players from around the world. The Super High Roller Bowl Europe will be the biggest buy-in tournament of 2022 so far with a mix of high-stakes players, online veterans, and a mix of amateurs and business set to compete for a prize pool expected to reach $10 million in prize money.

The player that earns the most PGT points throughout the series will earn a $25,000 championship bonus and be crowned the Super High Roller Series Championship winner.

One of poker’s early favorite shows was the NBC National Heads-Up Championship which concluded in 2013, and now the concept is being brought back to life on PokerGO with the $25,000 buy-in PGT Heads-Up Showdown.

The 32-player invitational will see the top 16 players on the PGT leaderboard following the conclusion of the U.S. Poker Open offered a seat, while the remaining seats will be made up of PokerGO invitees that include celebrities and poker professionals.

What Did You Miss in March?

It was a busy March on PokerGO with the continuation of High Stakes Poker, return of the U.S. Poker Open, and the inaugural StormX Invitational.

The month concluded with the fourth installment of the U.S. Poker Open. The series was dominated by the appearance of Phil Hellmuth and a Japanese contingent that included Tamon Nakamura and Masashi Oya. In the race to win the Golden Eagle Trophy and $50,000 championship bonus, it came down to the final heads-up match of the series as Sean Winter would emerge victorious to win back-to-back events and be crowned the 2022 U.S. Poker Open champion.