Playing Texas Hold’em, it often seems that bad beats are far too common – if you are the victim who suffers from them. A bad beat occurs when a strong made hand is beaten by a very long shot, especially when the “idiot” (in the words of famed poker celebrity, Phil Hellmuth) should have mucked his hand after the flop, and certainly after the turn. But he stayed to see the river and caught a huge longshot. Bad beats are more likely in low/middle limit games where the bets are relatively small as compared to high-limit and no-limit games.

Let’s examine a couple of cases

In a middle position, you look down at pocket Aces. That’s easily the best hand you could hope to be dealt. It happens just one out of 221 hands. On average, that’s about once every seven hours of play. Rare, indeed!

It is best to play that hand against three or, at most, four opponents (That gives you the best chance to win a significant pot). So, you have been betting and raising all along. A player in an early position keeps calling. The river is the 7 of clubs. The early-position player comes out betting. Studying the board, straights and flushes are not possible. Besides, you know he is a rather loose-aggressive player, often deceptive, and is low on chips. Hopefully, your pocket Aces is still the best hand. Of course, you have to call his bet.

He turns up a pair of 7s in the hole. He caught a third 7 on the river. Think of it. He had just two outs – a huge longshot. Disappointed, even angry as would be Phil Hellmuth! The Poker Brat would call him an “idiot.” Who could blame him? After that, be careful not to go on tilt. That could cost you even more chips as you play recklessly – in anger.

READ MORE: When a High Hand Turns Into a Bad Beat 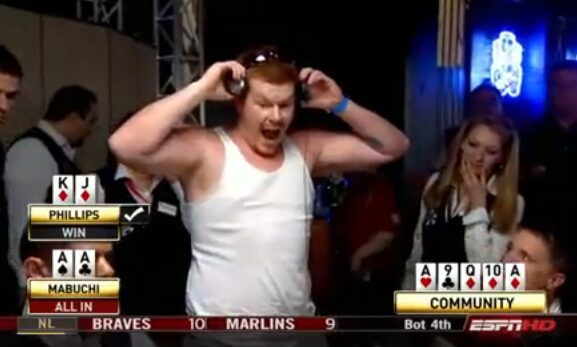 Here’s another typical Bad Beat story. In a middle position, you have been dealt A-K clubs, and call to see the flop, along with four other players. It’s a great flop for your hand:

That gives you top two-pair on the board, Aces and Kings. An early-position player opens the betting and is called by one other player before you. You raise and get two calls. The three of you see the turn. It appears to be a big blank. After your two opponents check, you make the bet, certain that your top two-pair is well in the lead – albeit, somewhat vulnerable. Both call.

The river is a lonely 8h. Again, you open the betting. The Small Blind calls. Then, the Big Blind raises it up. He just check-raised you. Not a good sign…

Pondering over the situation, you realize that he is somewhat deceptive and could be trying for a bluff. Of course, there is no way you would muck your hand while holding the top two-pair.

Showdown: The Big Blind turns up a pair of 8s in the hole. The “idiot” has caught a set of 8s, beating your two-pair. With your opponent having just 2 outs, it was a bad beat for you. It happens. Don’t go on tilt…