Poker Tips by George: Use the Implied Pot Odds

In poker, when the pot odds (reward) are higher than the card odds against you (risk), you have a positive expectation that you will gain chips by playing that hand. The inviolate laws of probability favor you. If you play your hands with this in mind, in the long run, you are bound to go home a winner.

This applies to the game of poker where you are playing against other players, but not when you are playing slots, the roulette wheel, or any other gambling game in the casino. In those games, the casino sets the “pot” odds – the payout – and it’s always in the house’s favor. That’s how casinos are profitable and stay in business.

There are two categories of pot odds: the current odds and the implied odds. Let’s demonstrate this with an example:

You are dealt A-9 hearts in a game of $4-$8 limit hold’em, with a full table of nine players.
On the flop, the dealer puts two more hearts on the board – Jh-8h-3s. You now have a draw to the nut (Ace-high) flush and need only one more heart on the turn or on the river to make your hand.

An early-position player open-bets and is called by two other players. It is your turn to act. You should call that bet as long as the pot odds are higher than your card odds. Let’s study the situation:

There are nine hearts remaining unseen in the deck. Pulling out your Card Outs & Odds Chart (see below), you see that, with nine outs, your card odds are only 1.86-to-1 against connecting. Round it off to 2-to-1 for convenience. (Estimates are okay.)

Note: The first column odds assumes the player will stay to see both the turn and the river.

Now, the pot odds are important. Looking at the board, there are about 20 chips in the pot. To stay to see the turn, you must match the previous bet ($4). So, the current pot odds are 20-to-4 = 5-to-1 which is higher than your card odds. In the long run, you will win those chips. It’s well in your favor! 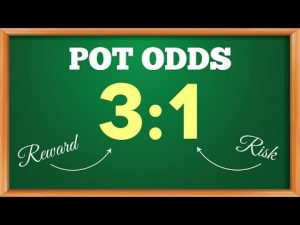 Fortunately, the turn is the five of hearts. Your Ace-high flush is the nuts! There are no pairs on the board, so an opponent cannot have a full-house or quads that would beat your hand. What a great haul – especially after a rag falls on the river and you bet for value as you raise an early bet.

I don’t advocate being greedy. But your goal is to win as many chips as possible. The more the merrier! The more I win, the more fun it is. Let’s consider the implied pot odds. That takes into account any additional chips put into the pot by your opponents on subsequent bets.

In this case, what would likely happen if you raised on the flop – rather than just calling the previous bet – after you catch the draw to the nut flush? It’s almost certain that the three opponents who bet before you would call your raise. They already have invested a bet in this round, goes their thinking. A raise of $4 adds $12 to the pot. Compared to your raise – four more chips – you are gaining an additional 3-to-1 pot odds in the pot.