A poker tell is a change in a player’s behavior or demeanor that can give a clue to his/her hand. A player gains an edge if s/he observes and understands the meaning of an opponent’s tell, particularly if the tell is unconscious and reliable. There is a vast range of tells, and there are false tells and reverse tells that a deceptive player may use, too. It takes work to become expert in the art of reading tells. 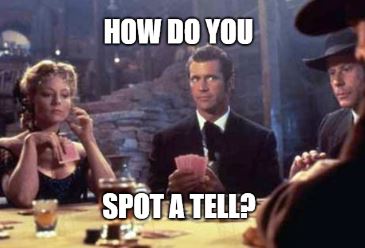 Notably, this article will only cover tells in the realm of live poker. It’s obviously not possible to spot physical tells when playing poker online. So, if you’re playing at a site like Betition.com you’ll need to specifically pay attention to timing tells and bet-sizing tells. In the meanwhile, here’s some advice about spotting physical tells at live poker tables.

How best to use tells

There are many kinds of tells, but I call this one the “glance-to-the-left tell concept.” This is something that could save you thousands of dollars – even make the difference between winning big in a tournament or losing your buy-in every time! Best of all, you can use it during every round of betting. Spotting a tell this well is most profitable pre-flop, as it won’t cost to muck your hole cards at that point, whereas folding on the flop or later on always has a cost.

You have been playing $4-$8 limit hold’em for several hours at your favorite casino and are about even thus far. In middle position, the two hole cards are dealt to each player. Most of your opponents will hurry to peek at their hole cards. Instead, you focus your attention on the opponents seated to your left. On that basis, let’s label this the “glance-to-the-left tell concept.”

You are looking for any tells that might give you clues to the strength of an opponent’s hole cards. It could be their eyes suddenly widening, a slight smile, a shaking hand, another peek at their hole cards, hands moves towards chip stacks. The cutoff does it. He is a tight-aggressive player who you have learned to read. And he is careful about his selection of starting hands. He must have a strong hand, you conclude.

Next, you study your own hole cards. It’s a mediocre hand – 10h-9h – that meets your starting-hand criteria. Two opponents before you have limped to see the flop, so it will be a multi-way pot. That’s good; the pot will be attractive should you improve. At this point, players will have seen over 70 percent of their final hand. That is inducement to make the investment to see the flop. But then there is the cutoff’s tell, which is much more important; so you decide to muck your cards. Why invest in an underdog?

As we later learn, the cut-off was dealt pocket Jacks – Jc-Jh. Let’s see how the hand could have played out if you had decided to stay in preflop by over-limping. When the action reached the cutoff, he looked around the table and calmly raised. You and three others called. After all, you already had one bet in the pot. That’s a mistake that many players often make.

You would have improved to four-to-an-inside-straight and a draw to the heart flush. But, unbeknownst to you, the cutoff now holds a set of Jacks. Neither the turn nor the river changes anything. He continues to bet and takes the pot on the showdown.

By using the glance-to-the-left tell concept, you saved yourself a fair amount of chips. The odds were heavily in your opponent’s favor from the start.

Going Forth from Here

Now that you have learned to use this concept against opponents who you can read, your good fortune at the poker table continues to grow. Soon you move up in stakes, winning ever more chips. Now you have the confidence to enter tournaments, winning far more than your fair share – possibly even taking first place in a major tournament!