Playing Texas hold’em, you have three racks full of chips in front of you. Certainly, you can readily understand why your opponents gaze with envy. What thoughts must come into their minds? “Boy, he’s a big winner. He must be a very good player.” They have boundless respect for you and will play cautiously when in a hand against you.

That doesn’t necessarily mean that you are actually a big winner. Maybe that person just won some money playing slots online at a site like duckdice casino and decided to try and parlay it into even bigger winnings at the poker tables. For example, I have seen players come to the table carrying two or three full racks. The players already seated may be so absorbed in their own hands that they fail to take note.

And, of course, players who subsequently join the table are not aware that all those chips were not actually won. They assume that you did win most of those chips. 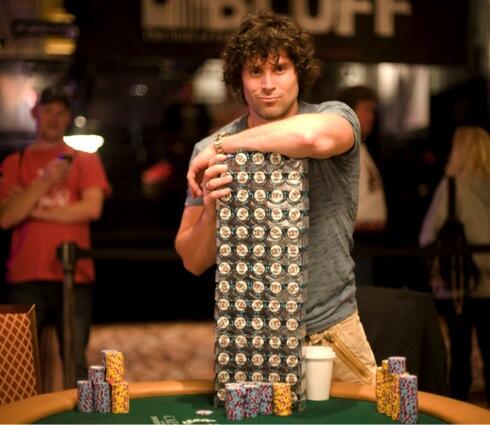 In any case, the result is that your opponents have much respect for you and may fear you. Sure, that’s great for your ego; but, far more important, that image of being a winner will help your poker success; so, you gain more self-confidence – that helps too. Betting or raising with self-assuredness makes your opponents fear you even more – all to your advantage. This is your Big Winner image – and it’s wonderful.

How Can a Big Winner Image Help You?

A scare card that could have made a player’s hand falls on the turn. From an early position, you bet out. Unless that card happened to actually improve your opponent’s hand – a long-shot, he mucks his hand – leaving the pot for you. We call that “stealing the pot.” It works best against one or two opponents. With three or more, there is just too much chance that one of them will be holding a strong hand.

Better yet would be if you are in a late position (the Button is best) and it’s been checked around to you. Instead of checking along, bet out. Your opponents all fold; and you have stolen another pot. Sure, it’s deceptive; but that’s part of the game. (Deception is a skill that every winning player has mastered.)

What If Your Image Gets Challenged?

On the other hand, there may well be occasions when one opponent defies your aggressive action and raises your bet. Better consider the chances that he has the goods. Ponder his playing traits. Check your poker notes. Is he a tight player? If so, most likely he has the best hand. Folding would be prudent. Should he be deceptive (like you are), then a re-raise might work for you. He does not know what hand you hold and can only guess from how you have played your hands. Meanwhile, as he looks across the table and observes your lofty racks of chips, he is more likely to muck his hand.

Caution: If your opponent does indeed hold a monster hand, and beats you out of the hand, some of your opponents will then be more likely to call your opening bets and raises – at least for a short while. In other words, your image sometimes changes over time at the felt. For a round or two, avoid using deception. Play it straight.

What if you have lost several hands and your racks of chips have plummeted down to a few stacks? (Unfortunately, it happens.) Quietly, unobtrusively, without gaining notice, buy another rack of chips so you might keep your Big Winner image.

At the end of the day, much like that famous Andre Agassi marketing campaign Canon had 30 years ago, “Image is everything.”