In response to my recent column on “Creating the Poker Player,” a Cardplayer Lifestyle fan who goes by the name Jesse James submitted an extensive commentary offering much food for thought. (I truly appreciate his effort; see below.) 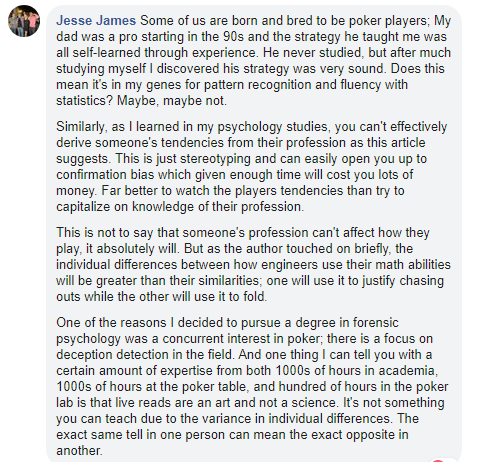 Some readers may recall that many years ago there was a man named Jesse James (1847–1882) who was a notorious American outlaw famed for robbing banks and trains, who led the James–Younger gang. He was assassinated in 1882 in Saint Joseph, Missouri.

Our modern-day Jesse James may well be a sly and notorious bluffer at the poker tables where he delights in “robbing” his opponents. “Some of us are born and bred to be poker players,” he says. His father who taught himself to become a poker pro years ago, passed on to him the strategies he used while winning at the poker table. “I discovered his strategies were very sound. Does this mean it’s in my genes?” Perhaps so. Our Jesse is also adept in statistics (probabilities), helping him to be expert at using the card odds and the pot odds to make key decisions at the poker table.

In fact, it’s quite possible that Jesse also enjoys other gambling games at live casinos online, visiting sites like https://mrcasinova.com/live-casinos/ and specifically selecting the games in which knowledge of statistics and probabilities play enough of a role to give the player a leg up.

In any event, here’s what he has to say about using the knowledge of an opponent’s profession – be he an engineer, a salesman, or a businessman: “As I learned in my psychology studies, you can’t effectively derive someone’s tendencies (while playing poker) from their profession,” as my column had posed. “This is just stereotyping and can easily open you up to confirmation bias which, given enough time, will cost you lots of money. (Note: Confirmation bias is the tendency to search for and interpret information in a way that affirms one’s prior beliefs or hypotheses, leading to errors in inductive reasoning.) “Far better to watch the players’ tendencies than try to capitalize on knowledge of their profession.” In that, I am convinced.

On the other hand, he does recognize that a person’s profession can affect how he plays the game – which is my main point here. Then, he continues: “But, as the author (referring to me) touched on briefly, the individual differences between how engineers use their math abilities will be greater than their similarities, one will use it to justify chasing outs while the other will use it to fold.” With that, I must disagree. Engineers, I wrote, are more likely to use their math abilities “in analyzing data, thereby reducing dependence on luck (chance). . . (so) they can avoid the losing hands.” Those were my exact words, and I stand by them.

Our Jesse makes an interesting observation based on his years of experience at the poker tables and thousands of hours as a forensic psychologist in academia – combining psychological theory and practice to the criminal, court and corrections systems.

With regard to detecting deception by your poker opponents, “live reads are an art and not a science. It’s not something you can teach due to the variance in individual differences. The exact same tell in one person can mean the exact opposite in another.” Food for thought? (I’ll consider this for a future poker column.)

On that note, I’ll announce that our Jesse James has won a free copy of my book on The Art of Bluffing. Kindly get in touch and I’ll be happy to send you a copy.