On Friday, May 20, Mark “dipthrong” Herm Skyped-in to the Poker Life Podcast for a 100-minute shoot cast on poker tournament backing. The entertaining one-on-one took place while show host Joey Ingram was camped out in Los Angeles for the Survivor Season 32 finale — rubbing elbows with Reality TV celebs Anna Khait and Tai Trang as he took in the LA nightlife. 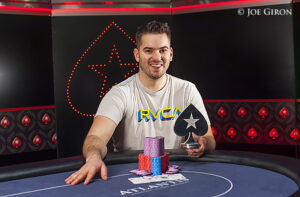 Mark Herm (aka “dipthrong”) burst onto the online poker tournament scene in July 2008, when Chirp earned a victory in the Full Tilt Poker Sunday Mulligan and backed that up with a win in the $750k and Bodog $100k the following week for $170,000 total. As host of the PocketFives Podcast, I was on Instant Message setting up an interview with the MHREP co-founder minutes after he took down the FTP flagship event early that Monday morning.

To give you a general reference point of the poker tournament vibe at that time, Dan “djk123” Kelly was atop the P5s rankings and Annette “Annette_15” Obrestad had come off a historic WSOP Europe Main Event victory for £1 million the previous year. There was an epic No Look Online Sit & Go Win that got over like a rake decrease with the forum crowd — and in the process Obrestad became the highest profile female online poker player in the world at the age of 18.

As of May 23, 2016, Mark “dipthrong” Herm is ranked among the Top 70 all-time online poker tournament winners with $5.15 million in lifetime cashes (Source: PocketFives). He is quickly approaching $1 million in live event ITM finishes according to The Hendon Mob.

However, it’s Herm’s experience as a successful backer that is of particular interest to many Poker Life Podcast fans.

A summary of those two parts *** ALERT: SPOILERS AHEAD *** is included below the embedded YouTube video.

Before Herm got into the nuances of poker staking, he offered up a working quote for poker media on the topic:

“I’m one of the biggest winners because I win. Not many people win at staking.”

The “dipthrong” poker story begins with caffeine-packed (Red Bull & coffee) online MTT sessions after Herm learned about the game from his buddy, Dan Kelly. From there, he and fellow pro Jim “Mr_BigQueso” Collopy formed a staking site called MHREP which started with roughly 10 “horses.”

Herm, now in his 30s, likens starting up a “stable” of backed players to getting a new fish aquarium. A staker’s first inclination is to shop around for roster talent, yet there is more to this process than choosing pros who look good on paper. You must have an “eye” for spotting talent.

From 2007 onward, Herm added an assortment of poker tournament specialists to his business — starting with “djk123” — and racked up steady profit while establishing himself as a top player. Then Black Friday happened, and 43 players under Herm were affected by frozen funds on Full Tilt Poker alone. What’s more, that just happened to be the “peak” of Herm’s addiction issues with drugs and alcohol.

Some players “straight up stole from me,” the $5 million online tournament winner admits to Ingram. Still, Herm blames himself solely for any negative dealings with past horses, saying that there were actions he could’ve taken that would have mitigated risk — but he failed to do so out of personal insecurity.

Not coming off as completely insensitive to the plight of your colleagues when a business deal isn’t working out is a unique skill that any employer must hone. A poker backer can get into trouble quickly if certain record-keeping checks & balances aren’t adhered to, but a backer must also attempt to maximize expectation by maintaining a healthy working relationship with staked players.

Actively engaging in financial dealings with fellow poker players means a person in dipthrong‘s position must be proficient in the art forms of character-judgment and ego-stroking, and it’s difficult to guide a horse through a barn fire when he or she is six figures in makeup. If a backer decides to put an end to the relationship, the makeup debt is generally assumed by the person staking.

So how does it feel to cut ties with someone who has eaten through $200,000 in tournament buy-ins? It’s “liberating,” says Herm… while pointing out that it’s “awkward” at the same time.

Along with popular multiplayer online video games, physical fitness and alleged recreational drug use, online dating is an activity that has caught on among high profile poker pros.

Bragging rights associated with Match.com profile views are just as valid as personal bench press records or 36-hour benders for your typical high stakes online poker player (assuming “availability”). I’ve written 5,000+ words on the topic myself and — like Papi & Chirp — can tell you stories you wouldn’t believe when it comes to first dates.

However, ChicagoJoey and dipthrong don’t quite see eye-to-eye when it comes to the value of “complete honesty” when meeting someone. Take this one girl Ingram met while enjoying the Reality TV scene in LA for instance…

Her fantasy with a lover revolves around beating each other to near death during foreplay. Ingram almost visibly threw up in his mouth a little bit when discussing this chance City of Angels encounter, but Herm seemed ready to whip-out a mobile phone and add this person to his Contact List.

In fact, if you’re a female whose deepest sexual desire is to take a dump on an online poker pro, give Mark a holla (more on this below). The May 20 Poker Life Podcast episode weaves in and out of Internet poker and courting.

I’ve kept in touch with Herm over the years and may have his ear on a couple of philosophical topics, but I still balked at asking his permission to pass along his Contact Info to would be upper-deckers.

I did take care of CardplayerLifestyle readers though. Here is Mark Herm’s 2016 WSOP itinerary:

Herm will fly out to Las Vegas on Thursday, May 26, to compete in the $50,000 buy-in Aria High Roller (one-day event). His live poker tournament schedule will include all of the Aria $25k contests as well as “a ton” of WSOP bracelet events.

A rented condo awaits Herm and buddy Jamie “pokerjamers” Armstrong — and both are focused on getting down to serious business this summer. The two have formed a pact with fellow pros Larry “BBOY3310” Sharp (shout-out to “Benson”), Taylor “taypaur” Paur, Paul “paulgees81” Volpe, Jordan “Jymaster11” Young, Ken Leathart, Josh “bsauce33” Weizer, and Mark “PJam” Bonifazi. The group will call themselves Team LFG during the 2016 Series.

We wish Team LFG the best of luck in the upcoming months!