Poker is Coming to Maryland!

When people think of Maryland, among the first things that usually come to mind are Baltimore’s major sports teams and Inner Harbor, the U.S. Naval Academy in Annapolis, and the state’s proximity to Washington, D.C. This week’s election results, however, guarantee that in the near future Maryland will have the potential to also become known for a thriving poker scene. A couple days ago, Maryland residents voted in favor of expanding the gaming offerings in the state’s 3 (soon to be 4) casinos to include poker. 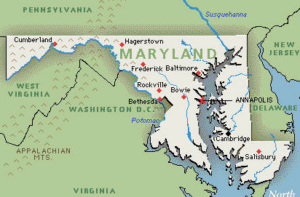 While slot gaming has been legal in Maryland since 2008, the issue of expanding gaming to also include pit games (table games like blackjack, poker, etc.) was highly contentious. Faced with Question 7 (the Gambling Expansion Question), voters narrowly passed the measure by a margin of 52% in favor to 48% against. Though Maryland Governor Martin O’Malley came out in support of the measure, voters were bombarded by “Yes” and “No” ads funded by interested parties far in advance of Election Day, including MGM Resorts International, Penn National Gaming, and Caesars Entertainment.

Penn National Gaming, which runs a casino with table games in neighboring West Virginia, is likely to be the biggest casualty of this vote. Now, Baltimore and D.C. poker lovers won’t have to travel nearly as far to scratch their poker itch and ante up at the felt. Hailing the resolution, on the other hand, were Caesars Entertainment and MGM Resorts International, which stand to benefit greatly from its passage into law.

Meanwhile, MGM has plans to develop a Las Vegas-style casino/resort in the National Harbor area across the Potomac River from Washington, D.C. If they can manage to procure a license from the local authorities, their new resort would be Maryland’s 5th full-scale casino.

Naturally, it stands to reason that the new legislation will also create a few hundred new jobs for dealers, pit bosses, and other table games and poker room staffers in the state.

Of course, Maryland’s 3 existing casinos (in Hanover, Perryville, and Berlin) will have the first crack at spreading poker and trying to lure in local players. Once the new Caesars Entertainment facility opens up in a couple years, however, this poker blogger’s money is on their poker room to be the most successful one in the state. As the recent opening of their poker rooms in Cleveland and North Carolina have proven, there are fewer things more powerful in poker than the WSOP brand name.