Wondering what it’s like to play in your first World Series of Poker Main Event? Ask Steve Bierman. A landlord and the owner of an insurance company in New Orleans, Steve regularly plays $1/3 and $2/5 No-limit Hold’em. He’s known, at Harrah’s New Orleans, for his friendly table chatter and a pugnacious playing style. Last December, Steve won a free entry into a satellite whose prize was a $10,000 ticket to poker’s most prestigious tournament. He outlasted 70 opponents to win the seat. 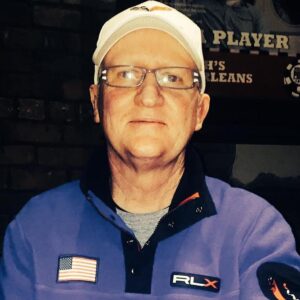 I first met Steve at Lager’s International Ale House in Metairie, Louisiana, where we talked poker with “Wild” Bill Phillips, Steve’s friend, coach, and co-founder of gulfcoastpoker.net. Determined to ready himself for the Main, Steve trained with Bill and played in Las Vegas for a full month. Just yesterday, during the first break of Day 1B, when swaths of grinders and fans and reporters swarmed the Brasilia Room of the Rio, I spotted Steve and asked him about his first WSOP experience.

Ben Saxton: “This is your first Main Event! This is huge. Why don’t you walk me through your day to let me know how you prepared.”

Extremely nervous. I’m telling you, Ben, I was sitting at the table for an hour and a half just focusing on my breath. That’s all I could do.

What was your mentality going in?

I generally play pretty loose early on. Most people don’t realize I’m an aggro, but with these levels as long as they are, I decided to tighten up. 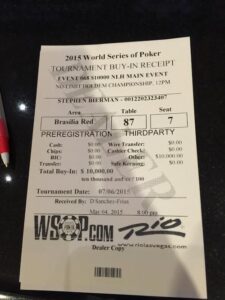 So you’ve been playing pretty tight?

I’ve played enough tournaments to know that your table draw is hugely important, and this is a good table draw. I feel like everybody’s playing ABC poker. I’ve only got one aggro. Unfortunately he’s to my left. I’ve noticed people are a lot more serious. This is unlike any other tournament I’ve ever played: everyone’s dead serious.

You’re at 36K, which is up a bit from the 30K starting stack. Any interesting hands so far?

I had pocket queens, raised preflop, and then the aggro to my left reraised me. A lot of times I’ll reraise there, but I just flatted. Flop comes out jack-high, two low cards, rainbow. I check, he bets 1,200, I call. Turn comes, no damage. I check, he bets again. Now I’m thinking he has kings or aces, but I’m gonna call anyway. Of course the river’s a queen. And—I think I might have screwed up here—I bet 4,000 on the river, and he folded.

I don’t know. I think if he has kings or aces he’s paying you off.

He said he had aces.

Did he really? Wow. I don’t really believe that.

I’ve got a feeling he’s a pro. I’d love to know his name.

I’m feeling great. My friend has been sending me texts. Look at what he wrote to me after I told him I was nervous (see image below): “Courage is not the absence of fear but the mastery of it. You have been practicing for this. Your time to shine.” 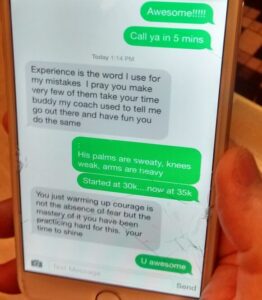 After six more hours at the tables, Steve looked excited and a bit tired towards the end of the evening. His stack had grown to 44K at 150/300 blinds. As soon as he found me on the rail, he was in mid-sentence about a confrontation with an aggressive player in seat one.

I’m thinking you put yourself in a pretty tough spot there.

Where was the mistake?

I don’t know… Raising the flop has to be bad, I think. You’re never getting value from worse hands when you make it 7,000. So I think you can just check-call the flop and go from there. But it’s a shitty spot. It’s a very shitty spot. You’re behind so many hands except for his bluffs. Even a hand like jack-ten has a pair and a gutshot.

That was the only mistake I made all day. I had to tussle with the one seat. And Bill told me, too: “Just leave him alone!” 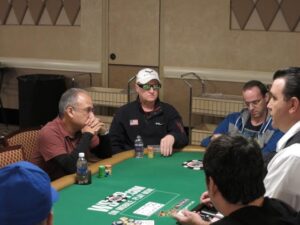 How are you feeling?

Nerves are gone. I’m feeling good. Getting a little bit tired, but I’m all right.

Yeah. I can’t see me not making Day Two.

Steve finished the night with 28.5K at 200/400 blinds. He’ll play Day 2B tomorrow. Steve will be posting updates on twitter @NOLACorvette.